In If It’s Not News, It’s FARK, Drew Curtis has produced a spotter’s guide to what’s wrong with the output of the Mainstream Media. 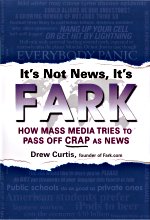 “Fark is what fills space when mass media runs out of news,” says the book’s very first sentence. For Curtis, “fark” is a combination of “not-news” that masquerades as news, legitimate news that gets by-the-numbers template-driven coverage, and otherwise-legitimate stories that are covered all out of proportion to their real importance. All appear all too frequently, and every one takes space and resources away from real news. Too much fark, says Curtis, “discredits an entire media outlet and its status as a legitimate news organization.”

With not-news, the book’s chapters showcase a multitude of sins: Media Fearmongering, Unpaid Placement Masquerading as Actual Article (a.k.a. rewritten press releases), Equal Time for Nutjobs, The Out-of-Context Celebrity Comment, the perennial Seasonal Article, are all there, with copious examples. On fearmongering:

If bird flu had killed 1.7 million people last year, everyone would panic. We’d have 72-point headlines screaming about the end of the world, riots in the streets, and general societal collapse– if Mass Media is to be believed, given its dire bird flu predictions. It turns out that 1.7 million happens to be the number of people killed by tuberculosis in 2004.

Want to know why there are so many “survey says” stories, or where the “new study finds cancer cause of the week” items come from? Curtis tells you the reasons.

Then there are the stories that might be legitimate, but don’t justify anywhere near the amount of attention they get: Missing White Women, Alligator Attacks, things that happen in NYC/LA/DC/Atlanta.

Day 1: Storm leaves 450,000 St. Louis residents without power as temperatures pass 100 degrees. If this had been in New York City, you would have already heard about it. Constantly.
Day 2: Fark prophecy comes true: More press coverage given to New York power outage affecting far fewer [25,000] people...

As to templates, Curtis charts the 5 steps of the media cycle, and the 10 steps of hurricane coverage. Follow along at home, and you’ll recognize the patterns.

Along the way he also touches on journalistic practices and their hazards. There’s the danger of Mysterious Repeating Sources.

On 9/11... the media reported some pretty large inaccuracies... Exactly how did every news organization end up reporting all these claims as fact? They copied them from each other, and assumed the original had checked them out.

The result: Everybody looks stupid when the truth comes out.

Another problem is story selection (“Surely there are more than three important events happening in the world right this moment...[?]”) with an eye to the market (“Everyone claims to want real news, but no one really does.”).

Some fark appears on days when “nothing of import is going on” and there are column-inches or minutes of air time that need to be filled. But while Curtis notes that “during times when real news is actually occurring, these types of articles all but disappear...,” I’d have to demur: He must not be reading the newspapers I read, or watching the television I watch. It might be laziness, or lack of resources, or pandering to the mass audience, but all too frequently I find that the fluff crowds out the important.

Which exemplifies Curtis’s statement of the Mass Media’s dilemma: “You can be a news leader or a crap peddler, not both.”

-o-o-o-
Mike Walker’s Rather Dumb: A Top Tabloid Reporter Tells CBS How To Do News might have been an historical curiosity whose time had passed– 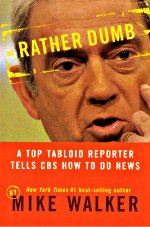 if it hadn’t been for the man in the title’s latest suit against CBS. Now that we’ve been condemned to a rehash of all the old arguments over typefaces, kerning, and “fake but accurate,” Walker’s 2005 polemic examination of Rather’s history as a reporter and the processes and decisions that led to what the web came to call Rathergate is as timely as ever.

Rather Dumb is no scholarly study (it doesn’t have an index, let alone footnotes). It reads like a transcript of some old-school Royko-esque reporter telling stories over drinks and smokes in the kind of dingy newspaper bar that no longer exists. It’s discursive, disorganized, and fun-- and along the way Walker has a great gleeful time examining the foibles and failures of “Gunga Dan,” his friends at CBS News, and the “Media Elite,” whom he has no hesitation to list: “New York Times, USA Today, Washington Post, 60 Minutes, CBS News, Los Angeles Times, CNN, Time magazine, NBC News, Boston Globe, etc.”

Before he’s done he’s dissected such journalistic trainwrecks as the Janet Cooke Pulitzer-prize-winning Washington Post story that turned out to be fiction, reporter Jack Kelley’s “enhanced” USA Today reports, and Jayson Blair’s career at New York Times, all with a mixture of outrage, indignation, and humor.

Reporters are almost never eyewitnesses to any event. We’re ambulance chasers, if you will, always arriving after... Our job is to keep cool, ask questions skillfully, and not be influenced by the emotions... You gather facts, check and recheck, then cross your fingers and pray [that] when your editor yells, “We’re on deadline, dammit! What have you got?”, if you haven’t got it, you’ve got... the balls to say, “It won’t fly.”
...The one thing that’s worse than missing the story is getting it wrong.
Every time you publish a story, you’re jumping off a cliff, so hope it’s a bungee jump.
(On Mary Mapes’s conversations with Kerry campaign advisor Joe Lockhart) Never do anything that will compromise you as a reporter.

Walker has warnings for editors, too:

Never put a reporter’s job on the line when you demand a story– desperation breeds imagination.

And for owners and publishers: The creation of “superstars” in the newsroom can block the institution’s defenses against fraud. Quoting USA Today’s post-mortem of the Kelley case,

A “virus of fear” infected staffers, who were suspicious of Kelley’s stories but were too afraid of his perceived power with top editors because he was “a golden boy” and “was seen as untouchable.”

But the book is about Dan Rather, after all, and in two chapters Walker traces the timeline of the preparation of Rather’s 60 Minutes report, methodically hanging red flags on every anomaly along the way. Before he’s done, he has condemnations a-plenty for Rather, Mary Mapes, CBS News president Andrew Heyward, and the network’s lawyers and experts.

And if that’s not enough, Walker also offers a shot-by-shot description of how CBS could have used the information they had to produce accurate, provocative story.