Now, just suppose this guy’s name was “Roger Clemens”...
But you KNOW the answer...  Dept

U.S. Assistant Attorney General Ronald Weich plans to resign his position soon, as two different scandals rage on in which he has provided allegedly misleading information to Congress.

Weich, who has served as Attorney General Eric Holder’s emissary in congressional communications... is the same Holder deputy who falsely told Congress that neither the Bureau of Alcohol, Tobacco, Firearms and Explosives nor any part of the Department of Justice ever allowed illicit firearms to "walk” across the U.S.-Mexico border — even as contrary facts emerged from the investigation into Operation Fast and Furious.

On Feb. 4, 2011, Weich wrote to Congress that the idea that "ATF ‘sanctioned’ or otherwise knowingly allowed the sale of assault weapons to a straw purchaser who then transported them into Mexico … is false.”
...
The DOJ has since retracted Weich’s letter but has not held anyone accountable for providing that misinformation to Congress...

Buried “treasure”
Somebody at Investors Business Daily has been reading the highway bill:

The Republican House of Representatives may soon follow the Democratic Senate and give the IRS the power to confiscate your passport on mere suspicion of owing taxes.  There's no place like home, comrade.

"America, Love It Or Leave It” might be an obsolete slogan if the "bipartisan transportation bill” that just passed the Senate is approved by the House and becomes law.  Contained within the suspiciously titled "Moving Ahead for Progress in the 21st Century Act,” or "MAP 21,” is a provision that gives the Internal Revenue Service the power to keep U.S. citizens from leaving the country if it finds that they owe $50,000 or more in unpaid taxes — no court ruling necessary.

It is hard to imagine any law more reminiscent of the Soviet Union that America toppled, or its Eastern Bloc slave satellites...

"MAP21” is this session’s "highway bill,” yet another of those multi-thousand page[1] pay-off-the-rubes- while-stealing-their-liberty[2] Christmas trees that Congress so dearly loves.

Your Congress, in action.

[2]  You really should take a look at this monstrosity.  Can you say National Endowment for the Oceans [page 559]?  Can you say Sport Fish Restoration [page 1428]?  Can you say 100 percent continuous levy on payments to Medicare providers and suppliers [page 1452]?  Can you say University Transportation Centers [page 1543]?  Can you say Secure Rural Schools [page 1609]?  Can you say Roll-Your-Own Cigarette Machines [page 1641]?  Oh yes, and Vehicle Event Data Recorders [for your car, beginning in 2015; page 1067]?  Why, there’s something for everyone!
And if you haven’t reached boiling point by the time you finish reading the table of contents, well, then you must be dead.

Finally: Mitch says what the Republicans *should* have been saying all along
The Hill:

Indiana Gov. Mitch Daniels (R) blamed President Obama for the spike in oil prices, saying the administration had pushed for consumers to pay higher prices at the pump.

"Let’s give the president credit for one domestic policy that works.  He wanted higher gas prices and he got them,” said Daniels on Fox News Sunday.

"Secretary Chu said $8 are about what they pay in Europe.  It would be great. Secretary Salazar said $10 and it still wouldn’t be for drilling in the places where we know there’s an awful lot of domestic production.  And so, they have gotten the doubling of gas prices and perhaps worse, it’s a conscious policy of this administration.  Maybe the one thing they set out to do and actually accomplished.” he said.

But the question isn’t whether he’s right (he is) or whether he was being "fair” (he was), but why it’s been left to lame-Duck non-candidate Daniels to drive hope a point that everyone in the Republican party should have been making ever since gasoline hit three dollars a gallon.

Why the Republican silence?  Were they afraid of being dis-invited to those famous D.C. cocktail parties?

Or of being attacked by the environmentalists, the Democrats, and the media.*

Or perhaps it’s because that, deep in their hearts, the gentry Republicans agree that $10-a-gallon gasoline actually isn’t that bad an idea.

Which would certainly explain why their endless fulmination over "energy independence” has never led to anything concrete that might achieve it.

Gentry Republican votes "present”: "I think people recognize that the president can’t precisely set the price at the pump”
Related:

“If federal prosecutors receive public credit for their good works... they should not be able to hide behind the shield of anonymity when they make serious mistakes.”
Make It Stop! Make It Stop!  Dept
So says Ninth Circuit Judge Carlos Bea.

Hey, we could use a lot more "recognition” like this!

Ten years of Daily Pundit...
...deserve more than a passing mention around here.  So congratulations to Bill Quick for hitting the ten-year mark over the weekend.  Long may ye rant!

To my Readers, Lurkers, and Lookers-on...

We’ve got Republicans in Congress who are willing to hold the entire government hostage simply to give a Christmas present to industry.

Wow!  Somehow the congressional Republicans found enough guts to advance the Republican agenda by "hold[ing] the entire government hostage.”  Horrors!  Keep this up and, next thing you know, they’ll be acting like the Democrats, instead of a like a bunch of candy-assed wimps.

And Michael, from where I sit a more stable oil supply combined with lower energy prices makes a pretty good Christmas present for everybody, not just industry.   Well, everybody who doesn’t want us to freeze in the dark, that is.  Unlike many of your friends in the Progressive Establishment.

1 Concur, but you 'know' the reason he's complaining is that it's not HIS agenda they are pushing... sigh

...with a Japanese lunch menu. 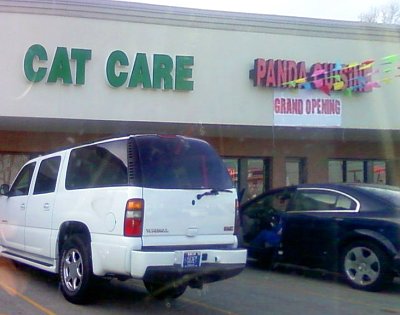