It’s BlogMeet day, hooray!
At dinner with a friend last night I mentioned that I was planning to attend the blogmeet this afternoon:

He:  Do you have to bring your librtarian membership card to get in?

Me:  No, but your concealed.carry.permit would probably be appropriate.

Marvelous afternoon for sittin’ on the patio, and the usual terrific company.

And Brugge was great, too.  Hadn’t been before, but will definitely get back.

1 Do they not have an awesome menu? 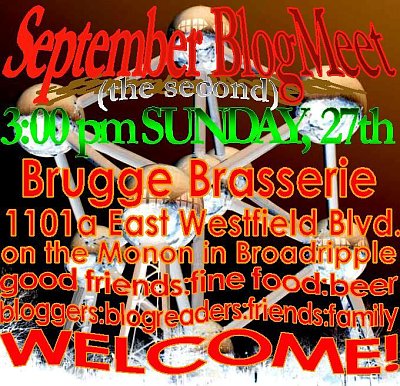 New in the sidebar/BlogMeet report 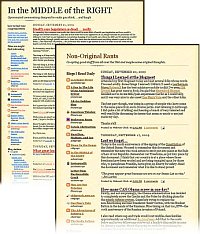 In the MIDDLE of the RIGHT,
where “B” offers “Opinionated commentary designed to make you think... and laugh.”  (Anybody who has a “How to find your congresscritters” link at the top of his sidebar has the right attitude for me!)

The Non-Original Rants are assembled by “Midwest Chick.”  (So she says, but I dunno... I think she really writes ’em herself; they look pretty original to me.  Remember: It ain’t the issue, it’s the riff!)
Both have been blogging since the beginning of the year, and their works deserve checking out.  Altogether a fun meeting, and I promise that I won’t monopolize them the next time they make it down.  (And “B,” I owe you at least one beer.)

More blogmeet reports from Shermlock (who, unfortunately, didn’t get an opportunity to run his Pain-as-MSG test), Roberta, and, of course, Midwest Chick and B.  Other bloggers present: Hagbard (complaining that what with grad school and all it’s so hard finding time to blog) and Nathan (who doesn’t have a report, but does have a terrific meditation on faith inspired by- of all things- the IndyStar’s falling-over-its-own-feet religious reporting).

Those who missed it (and those who didn’t) are reminded that we’re doing it all again - this time at Brugge Brasserie (Flash required, sorry!) - on the 27th.

1 Thanks for the kind words!  I very much enjoyed the conversation (and the Scotch eggs).  It was a lot of fun and I appreciate you taking me under your wing at our first meet!! 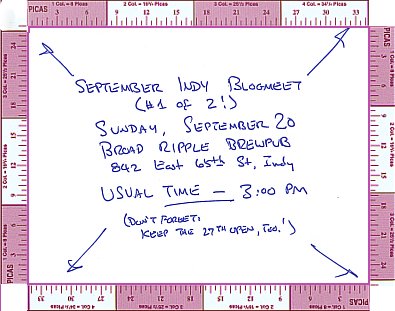 The August linklist will appear (below the break) shortly...