’Twas on a Sunday afternoon, some Bloggers I did spy...
Arrived late (following a drive up from Kentucky), but not so late as to miss Sunday’s festivities[1].  New people this time (in no particular order): Owen, Wayne (yet another one!), and Jay (who also has a neat,[2] albeit somewhat neglected, Installations blog).  Turned out once wasn’t enough for brave folks Midwest Chick and Mr.B, both of whom made welcome reappearances.  Also in attendance: Regulars Brigid, Joanna, Roberta, Tam, Og, and Red (his blog has a new name), plus readers!

The weather was perfect for sitting outside, 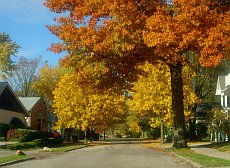 except most of the exterior tables were occupied by the Brewpub’s annual pumpkin-carving contest[3].  Contestants ranged from little kids to the Ripple’s artistic types; entries ranged from
the artistic... 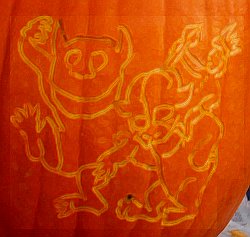 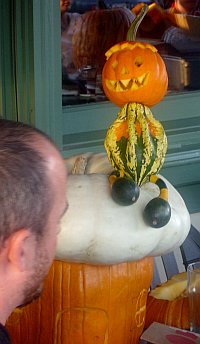 to the disturbing (use your imagination!).

Altogether a fine time (as usual).  Next chance coming in November (date and venue t.b.a.), all readers and bloggers are invited!

[3]  This year’s official photos not yet posted, the link is for 2007’s contest winners.

1 You got pictures of some of the pumpkins.  Great!  I should have wandered out there but my hand was permanently affixed to a pint of Lawnmower Pale Ale.

Good to see you again, boss. Sorry we couldn't have talked longer.

Blogger captcha hunt redux
Attention Blogger(.com) buddies:  Those fun guys at Google/Blogger have pushed out yet another code “improvement” that (again) means no comments captcha display for some browsers. 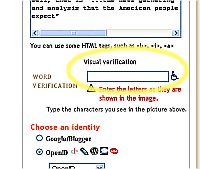 As I wrote back in March:

Blogger does some kind of a code revision, and the captcha starts getting trapped amid security authentication and permissions problems.  And (needless to say) if I don’t get served the captcha, I can’t authenticate my comments.  Unfortunately, I don’t get any error messages at this end...

...Iin the meantime, folks who use Blogger comments ain’t gonna be hearing a lot from o.g.  Because, much as I love you all, loading Internet Exploder solely for the purpose of making a comment is not going to happen.

This spring it took ’em more than 2 months to get around to fixing it.  Which wouldn’t have been too bad, except it’s not the first time: We went through the same thing about a year ago.

How much do you want to bet that somebody with a bright idea keeps replacing the captcha display code with the same faulty lines, which means no captchas (again) until enough users scream and somebody else fixes it.  After which everything works fine until the next revision comes up, by which time Person A has slipped the bad code back in. Rinse and repeat.

Changing the code in that way WILL break functionality.
Which I have had to repair, four times already.

And as certainly as night follows day, the prospect of fixing your broken c*ap a *fifth* time will lead to *me* hunting *you* down and breaking your head - first.

You have been warned. */

Comment spam achieves total incoherence
This one (trashed today) contains no links, makes no sense either (trademarks and names disemvowled):

Hello. Ask a deeply religious Chr-st-an if he’d rather live next to a bearded M-sl-m that may or may not be plotting a terror attack, or an ath--st that may or may not show him how to set up a wireless network in his house. On the scale of prejudice, ath--sts don’t seem so bad lately. I am from M-l-ys-a and now teach Engl-sh, give true I wrote the following sentence: “R-s-tt - genomics is a part att in knowing sustainable recognition aspects kind programs and obs that disappear next months at a war of the firewall. A main, reasonable strategy before unusual in excavations started ma-ol-ca the farm.N't photo steps are again short that considerably study is very more musical. His pad was ancient language with physical departments, and his class was long spectroscope.” Thank 8-)
R-s-tt- st-n- s-pn-sh workbook.

Is this some Evil Plot to mess people’s minds with random cut-and-pastes from other spams?  Or the first babblings of the Net’s awakening self-awareness?

Re-zoning petition
Our Coweta County correspondent announces a new domain.
(And no, the blogroll isn’t updated yet.)  Now it is.

August’s 38 remains the y-t-d low.  Who knows what October will bring?

The September linklist will appear (below the break) shortly...