Indy blog meetup - May 4, 2008
Couldn’t have picked a nicer day: Just slightly cool in the shade, but, considering the kind of weather Indiana can have in early May,[1] I’ll take it.

Arrived at the Broad Ripple Brewpub shortly past 3, and after spotting the group with two tall blondes (and after rearrangement of the tables), I got to sit 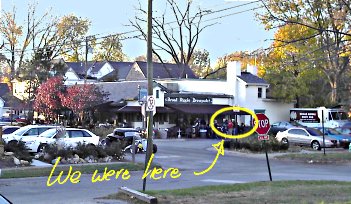 next to Frank W. James.  Frank has a new blog (started on April 2nd) that, in contrast to his conspicuous gun-writing creds, is turning into a fascinating narrative about what it’s like to be a farmer on the prairies of northern Indiana.  Bi-costal wussies who think that corn comes in a can and that “farmer”==“ADM” will find much to learn.  Two recent lessons: (1) All that fancy equipment doesn’t maintain itself, and (2) as a farmer you’re always rolling the dice with the weather.  There’s a book here, or I miss my guess.

Across the table was Caleb, proprietor of Call me Ahab, who noted an increase in his traffic since he started posting about 7th District politics.  Also in my corner, two readers newly arrived from Seattle.  We had a little discussion about Indiana’s tornado season (Newcomers tend to panic if storms are reported anywhere within 100 miles.  Longtime Hoosier: “Tornado in Greenwood? Tell me if it gets north of 38th Street.”[2][3]) and more talk about arts in Indy.

To my left was the charming Roberta X. (Now when she writes about “the skunk works,” I’ll know which skunk works. (Bwah-ha-ha-ha!))

Altogether, an excellent collection of interesting, right-thinking people.  Which left me absolutely convinced that “if we were in charge, the world would be a better place.”  Or at least more interesting.

Now I get to add a set of “Bloggers I’ve Met” links to my sidebar. Nifty!


Elsewhere:
Roberta X has pictures (related)
BTB’s report (linked above)
Call Me Ahab: Meeting bloggers is cool / You might be a gunnie if...
Neanderpundit: Blogmeet!
(added 080506:) View From The Porch:  My head feels vacuumed out
-------
[1] Or even late May. I recall Indy 500s with overcast skies and temperatures low enough that you needed a jacket for comfort.

You've got to be made of tougher stuff than those Connecticut Yankees or California Sensitives to cut here.

Last night, when the tornado sirens were blaring, most of my neighbors didn't take cover.  They stepped out of their homes onto the road and looked to the sky to see where the funnel cloud was.  Some of the younger crowd even went stormchasing up thru Choctaw to Jones and Luther.

1 We are a jaded lot, weatherwise.  That fabled F5 in 1999 passed to within 900 yards of my front door; power was already off and the skies were some sort of squid-ink black, so I decided to go outside and face the terror, one on one.

Turns out that about half the block had had the same idea.