Liberty and The Medical Mindset
Via Cranky via Tam, a pointer to this from The Happy Hospitalist:

Kill Off The Cardiologists And Save America At The Same Time

How you ask?  Erect A Federal Smoking Ban.
...
It's amazing how we spent over two trillion dollars last year, the vast majority of which was spent on conditions directly attributed to smoking.  Heart disease.  Stroke.  Emphysema.  Cancer. It's all directly correlated to smoking...  We spend billions of dollars a year on medications trying to counteract the results of these preventable disease processes.
...
...If Obama really wants to make a dent in the health care expenditures, he should, by executive decision, in the interest of National Security, sign a federal decree banning smoking in all public places.  Talk about leadership.  He would save America, I believe, with that one act.  Decreased health expenditures, increased productivity, fewer sick days, no more smoke breaks.

Needless to say, the links from C&T have resulted in HH getting a beating from the libertarian side of the ’sphere.  In their posts, both Cranky and Tam address the issues of nanny-state-ism, the proper sphere of government, and personal liberty, but it seems those involved are shouting past each other.  I believe I know the reason why.

There are doctors on both sides of my family.  In addition to my father and grandfather, two of my uncles and a pair of cousins are/were M.D.s., D.D.S.s, or the like.  (I also have lawyers on both sides of the family; perhaps I should be considered doubly cursed!)  And after growing up surrounded by physicians (but not being one), I think I can write fairly about them.

Most doctors are tremendously dedicated.  The ones who aren’t don’t make it through med school and internship– or, if they do, find some non-practicing niche to occupy themselves (medical administration, perhaps, or employment at one of the drug companies).  The ones left– who actually see and treat patients– are saints, giving up their evenings, weekends, and Christmases to help frightened, cranky, uncooperative, and, frequently, ungrateful people.

But sainthood is only a step or two away from godhood, and there’s the rub.  After traversing the obstacle course of medical education, doctors feel, with some justification, that they are special; that the M.D. they’ve been granted also means “smarter than the average bear.”  And the whole medical environment encourages this.  In hospitals and clinics, the man (or woman) with the degree is boss.  Their orders are law, their opinions are solicited, their concernes are addressed, their whims catered to.  The deferential treatment given star specialists is comparable to that received by four-star generals, corporate CEOs, or members of Congress.

The only fly in the ointment is those damn patients.  Every time, it seems, it’s the same old scenario: Someone comes to you with a problem.  You diagnose it, and prescribe a course of treatment to cure (or at least alleviate) it.  The patient says, “yes, doctor,” and then proceeds to do as he damn well pleases.

Medications prescribed but not taken, courses of treatment begun but left unfinished, lifestyle changes that never change... what’s a doctor to do?  It’d all be so much easier if we could make ’em do the right thing.  They’d live longer and be grateful, and doctors wouldn’t be frustrated.

So the doctor, accustomed to deference, accustomed to saying “let it be,” and having it be, thinks:  What’s more natural than to pass a law.  That’ll fix it.

And should someone object, the doctor will be amazed.  Isn’t he the expert, the one dedicated to taking care of people, the one who has the correct solution (and only the best interests of others at heart)?  Where is the understanding?  Why all the ingratitude?

Except people will still be people.  But now they’ll be lawbreakers, too.


(Note:  I added the 3rd para from the end on 090107 08:20, because on rereading it didn’t seem sufficiently clear what my point was.  Demonstrating one problem with instant-posting: Insufficient time for the ideas to gel completely. - o.g.)

Explanations, please?
Okay, can somebody explain this without invoking the usual backroom dealing and corruption?

WASHINGTON -- The Federal Deposit Insurance Corp. reached a preliminary agreement to sell the remains of IndyMac Bank -- one of the biggest bank failures in U.S. history -- to a team of high-profile investors, suggesting there is private money willing to invest in troubled banks if the government agrees to shoulder heavy losses.

The investment team, which includes affiliates of private-equity chieftain Christopher Flowers, hedge-fund investors George Soros and John Paulson, and computer mogul Michael Dell, will contribute $1.3 billion in capital toward a purchase of IndyMac Federal Bank, valued by the FDIC at $13.9 billion, which is the amount of deposits, loans, securities, branches, and other assets to be held by the bank on Day 1.

The complex terms also include seller financing that could take the form of Federal Home Loan Bank loans and other sources...

As part of the deal, the FDIC agreed to share future losses on a set pool of IndyMac assets...

...IndyMac will assume the first 20% of losses on these assets, which the FDIC wouldn’t quantify until the deal closes.  The FDIC will absorb 80% of the next 10% of losses, and then 95% of losses on the remainder of the portfolio. - The Wall Street Journal [1]

So Soros, Paulson, Flowers, Dell, and friends are getting almost $14 billion assets for a bit less than 10 cents on the dollar.  That feels like a typical fire-sale ratio, although it would have been nice if, for something worth $14 billion, the FDIC could have held out for a better price: Was the only choice to give Soros, etal a $13 billion gift from the taxpayers?  Couldn’t they find somebody who would have paid, say, $2 billion?

And then there’s the other shoe: Those “guarantees.”  Not satisfied with a 90% margin on IndyMac’s “quantified (?)” assets, the “investment team” held out for federal– that means taxpayer, 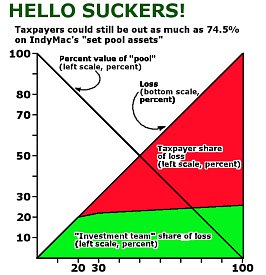 you know– protection against losses for another “unquantified” block, probably (the article doesn’t say) illiquid mortgage derivatives and the like.  The new owners say they will generously accept the first 20% of any losses, but taxpayers get to make up all but a pittance of the rest... which can rise to as much as 74½ % of whatever “value” the FDIC dreams up.

And this stuff is to be valued how?  At “market”?  (No, that would be zero.)  At “book (before disaster)”?  Hel-lo 74%!  At some “best guess”?  And how are losses determined?  If they aren’t based on the entire “set pool,” then this is just another way to privatize profits while sticking the public with the losses... and didn’t we just run ’round that bush with Fannie and Freddie?

All in all, at first glance (and even second glance) this looks to me more like a plan to funnel federal money to specific favored individuals than a way to restructure a bank.  But I’ll admit that I’m just an ordinary clown who doesn’t “do” high finance.  So maybe someone who does can explain where I got confused.

Elsewhere (added 090105 15:43):
American Thinker:  Look Who’s Buying IndyMac
------
[1] The article is behind a subscriber wall; the link points to preview version. The quotes come from the Saturday/Sunday January 3-4, 2009 front page.  It is “interesting” that the online version of the article omits the phrase hilited in green above.

1 No surprises here, my friend.

The Morlocks operate as always.