Healined Bad News for Broadband (with the subhead “The FCC wins one for Google.”), the editors begin by intentionally confusing two issues: Network neutrality, and broadband expansion.  Let’s try to untangle them:

President Obama has been a long-time proponent of "net neutrality," which would prevent the use of price to address the increasing popularity of video streaming and other bandwidth-intensive activities that cause Web bottlenecks.

Well, no.  “Net neutrality” says nothing about price, except that the carriers would not be allowed to charge different prices for transporting the similar kinds of packets.  It also says nothing about the option of metered service, where customers who use more bandwidth would pay more.

The new policy is a big political victory for Google and other Web content providers whose business model depends on free-loading off the huge capital investments in broadband made by others. 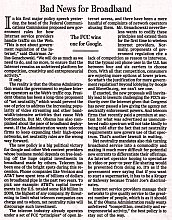 It’s just as easy- and just as inaccurate- to say that the carriers’ business model depends on “free-loading off the huge capital investments in content and server capacity made by the content providers.”   Either statement ignores the fact that the one needs the other (why a transmission system,  if there’s nothing to transmit?), and that the content folks already pay big buck$ for their connections and bandwidth.  So let’s have no more talk of “free-loading.”

The telecom industry already operates under a set of FCC “principles” of open Internet access, and there have been a mere handful of complaints of network operators abusing them.

Which is a bad thing because...?  Didn’t I just hear something about AT&T blocking Skype connections on the iPhone?

Normally, proponents of government regulation cite a lack of competition as reason to intervene.

...or when companies abuse their customers.  Like credit cards, for example?

But the typical cell phone user...

Woah!  Whiplash!  I thought the topic was Internet access, not cell phones.

...in the U.S. has between four and six carriers to choose from. With all that competition...

I don’t know about “the U.S.,” but in my Indianapolis neighborhood, while I can get dial-up from several suppliers, for high speed I have a total of one choice - the cable TV provider.  (The telco gives me the old “Sorry, too far from the exchange” story every time I ask about DSL.  Then they pipe up with, “But we can get you a T-1 for only $900 installation!”)  What is this “competition” of which you speak?

So what’s the justification for more government regulation?  Beyond lobbying by Google and MoveOn.org, we can't see one.

Ah yes, invoking the evil Google, and evil-er MoveOn.org.  (Do I sense an argument running thin?)

Note that the editors don’t address the core issue of “net neutrality,” which is whether carriers should be permitted to handle different people’s data differently.  Or, more accurately: Can they reduce the quality of someone’s service (and maybe that someone is a competitor) unless that same someone pays a premium for service that the carriers are already being paid for.

(And don’t think AT&T and Verizon haven’t already talked about doing just that.)

But let’s shift the focus for a moment.

Mr. Obama has also complained about the pace of broadband deployment.  If the Administration wants telecom firms to keep expanding their high-speed networks, net neutrality rules are the wrong way forward....

Telecom has been one of the bright spots during this recession.

Which is nice, but irrelevant.

Phone companies like Verizon and AT&T have spent tens of billions of dollars on broadband pipe in the past two years.  To pick one example: AT&T's capital investments in the U.S. totaled some $18 billion in 2008, the highest of any company.  By threatening to limit what telecom companies can charge and to whom, net neutrality rules will discourage such investment.

Well yes, regulation does discourage investment.  Which I might feel a bit more concerned about, except I keep remembering the $200 billion in tax breaks we already gave the incumbent carriers, in exchange for which we were supposed to get fiber-to-the-home by the year 2000(!!!), and for which we actually got nothing.[1]

Anyway, I’m not particularly concerned with the welfare of companies whose principal problem is too much demand for their product. And AT&T, well, $18 billion in 2008- looks like you have about five more years to go.

Strictly speaking, it turns internet service into a commodity.  Which is not necessarily a bad thing.  There are other kinds of broadband that don’t (or wouldn’t) fall under these regulations, just don’t call it “Internet,” ’kay?

...and making it much more difficult for potential new entrants to differentiate their offerings.

An Internet operator hoping to specialize in video or peer-to-peer file-sharing would be prevented from doing so.

It’s as if the government were saying that if you want to start a supermarket, it has to be a Kroger or Safeway because Trader Joe’s discriminates.

How about that your supermarket it can be a Kroger or a Safeway or a Trader Joe’s; but whichever it is, you won’t have to pay off Big Louie so the delivery trucks can come down your street?

Internet service providers manage their networks to give quality service to the greatest number of people...

...which is as it should be. If the Obama Administration really wants unfettered “competition, creativity and entrepreneurial activity,” the best policy is to stay out of the way.

And when there’s “unfettered competition” facing the big incumbent carriers, they can get back to me.


Related (please read the first before commenting):
Which “Net Neutrality” are you talking about?
Democrat AG, ISPs team up to block 99% of usenet
Elsewhere:
Doug Ross’ Network Neutrality papers
------
[1] The link in that sentence is from 2007. Two years later: Still no fiber at my house!

1 My own cell provider just backtracked on an announcement that they were going to start charging a buck and a half to mail out the bill each month.  If the WSJ is worried that the wireless industry isn't going to be at least as devious as, say, the credit-card industry in terms of soaking its customers, well, they're not paying attention.

...a provision in House and Senate [Obamacare] bills to expand Medicaid to cover anyone with income less than 133 percent of the poverty level, or $29,327 for a family of four.

Since states pay roughly one third of Medicaid, the provision could add billions of dollars in costs to state governments.
...
In a letter to the Senate, Indiana Republican Gov. Mitch Daniels said: “States will likely have to pick up the tab for this extension of Medicaid.  We have estimated that the price for Indiana could reach upwards of $724 million annually.

“These additional costs will overwhelm our resources and obliterate the reserves we have fought so hard to protect.”

For Tennessee, the extra cost could reach $1.2 billion, according to Sen. Lamar Alexander.

Set aside for a moment my I’d-lay-you-even-money suspicion that these Medicaid cost increases appear nowhere in the administration’s “reform” cost estimates.  Let’s just look at the numbers.

Indiana has a population of about 6¼ million.  Governor Mitch’s $724 million/year estimate, evenly-divided (which you know it won’t be), works out to an annual state tax increase of $115 per capita ($460 for a family of four).  For Tennesseeans (population roughly 6 million), it’s worse: $1.2 billion parcels out at $200 a piece.  Factor in the people who won’t pay these taxes (anybody below poverty+33%, for one), and if you’re one of the productive you can probably double these numbers.

Or how about a back-of-the-envelope calculation, starting with a SWAG estimated annual cost of $750 million per state.  The magic number= $37.5 billion - per year.  Not on the federal books.

And if the states pay only 1/3 of Medicaid’s total cost, doesn’t that mean the federal share goes up $75 billion, too?  Hey, I thought once healthcare got reformed, the existing federal programs were supposed to cost less!  (I know, silly me!)

And of course none of this accounts for all the folks who will be forced below the poverty line by Obama’s new energy taxes!

The Obama promise:  I won’t raise your taxes (well, yes I will, but... Look! Unicorns!), but somebody else will!

1 Ran across your post and agree with all of it. However, one additional aspect to the cost shifting is that people with insurance today will either a.) see their costs rise because other employers drop coverage or b.) be pushed off their employer plans themselves. For a more detailed explanation:

Keep up the good work!