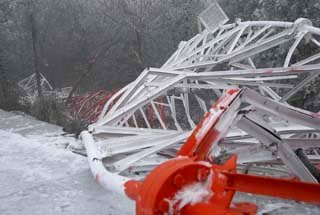 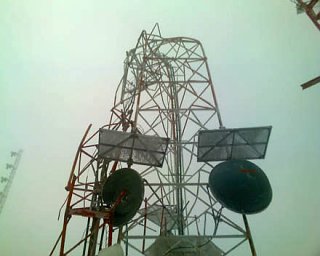 One of News Channel 7’s main broadcast towers has collapsed due to ice and high winds, hitting the main back-up tower as it fell. Both towers are on the ground ...

The road up to Hogback is still being cleared of snow and ice. Crews have made very good progress but still have another mile of road left to scrape.

The analog ch 7 antenna is in Landrum and the crew is getting ready to haul it up the mountain around 4pm. It will most likely take the rest of today just to get it up the hill. We are speculating that they should have the antenna and transmission line up by this weekend but all of this depends on when the truck gets up the mountain.

Another crew is trying to get up to Hogback to install a temporary TSL (transmitter to studio) dish which will get phones and data connections back up and operational.

Don’t envy them that job!


(Last time we had something like this happen around here, it was a 500-or-so footer that belonged to the local university FM station. Summer thunderstorm:  Big tree in the adjacent woods blew down and fell across one of the guy wires. Tower fell within the guy circle- as they’re supposed to- disassembling itself into sections on the way down.  No report as to whether any of the occupants of the studio/transmitter building at its base had to change underwear afterward.)

1 Well, they put the main backup tower within the fall radius of the main. Duh.  I wonder who will be responsible for that.  Probably someone who retired 10 years ago.

2 It's a mountaintop.site. I'd assume that decision was based on topographic and financial factors (terrain, land acquisition cost).

From that shadow in the sat view, it looks like it was a self-supported. 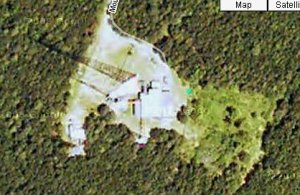 Win some, lose some.