Another business model goes plop
Link your radio to a retailer to create a “buy what you’re hearing now” button for music.  Sound like a plan?  Didn’t succeed in the U.K.

Radio group Unique will close down its instant music purchasing initiative [“Cliq”], blaming the slow take up of DAB for the decision, the F[inancial] T[imes] reports today.

...Cliq [...has] been touted as the showpiece for the commercial potential of interactive radio. Cliq allowed DAB listeners to acquire a song as they heard it. It was launched two years ago, with the service embedded in standalone DAB[1] radios... and also ran as a Java applet on mobile phones. - The Register

It appears that Cliq was shuttered due to low levels of business; while the company reported an “operating profit” last year, those figures didn’t reflect debt expenses or recovery of startup costs.


-------
[1] DAB is the European version of digital radio. It has experienced uptake problems similar to those of American-version HD (but less severe, with an estimated 6.5 million sets presently in use in the U.K. alone).

A new fancy radio - without HD 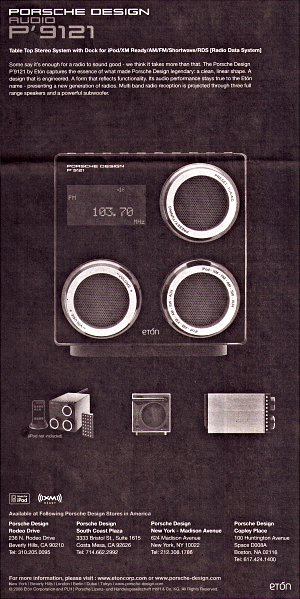 This expensive
4-column x 14¼" ad appeared on Monday’s Technology page (B6) of the Wall Street Journal:

So where’s the HD?
Nowhere.

Which should be particularly disconcerting to the HD crowd as this status-symbol-grade unit parses RDS information transmissions and comes factory-equipped to receive XM satellite broadcasts (not to mention including the now-obligatory iPod dock).  (The European version, BTW, is fully DAB-capable.)

"IBiquity, the company behind HD Radio, is making enemies all over the place, the latest of which is Pioneer. The Japan-based corp, which makes the popular Inno, recently told the FCC [PDF] that iBiquity's scheme to force satellite radio manufacturers to include HD Radio playback is absurd."

Maybe, if iBiquity pisses off enough manufacturers, no one will build their crappy radios, which don't even work.

Isn't this precisely why citizens long ago rejected HD? Why does BigRadio stupidly, greedily insist upon shoving it down our throats and polluting our airwaves with broadband digital jamming? Do they really think that jamming our favorite stations will win us over any more than did their sub rosa arm twisting of broadcasters? Do they think their endlessly embroidered lies about 'streams' and Saturday-Night-Suspect denials of jamming will earn them new friends?

Isn't this new Porsche Design radio marketed to those who know value? Why is it that HD gangsters and their dupes cynically know the cost of everything and the value of nothing?

This new receiver represents a committment to value and respect for both listeners and broadcasters alike. What a delightful entry into the still very much alive business of analog broadcasting.

3 The fact that it doesn't have HD is a major selling plus for me, putting HD in a receiver is like putting an 8 track player in one: neither work, and are both obsolete.

Class and no class
No class:

Cameron [Holt] is a Make-a-Wish child, and Make-a-Wish is sponsored by radio station WZPL 99.5 FM.  In that context, Cameron was invited to visit the track May 21; he was asked to participate in a pit crew competition and be the guest of the WZPL team, including disc jockey Dave Smiley and other radio hotshots.

But when Cameron and his parents and sister Candace, 11, showed up at the WZPL area, Dave Smiley and the others in his crew were drinking,” said Trish [Sieger, Cameron’s mom].  She saw Smirnoff bottles and indifference.  The time? About 11:30 a.m., says Trish.

“I walked up and introduced Cameron.  They never put it (alcohol) down so we just stood there.”

“We were not expecting fireworks,” she explained.  “But when a sick child is involved, you would think they would make an effort.”

Although eventually the Smiley team offered to take Cameron to meet the drivers, the little boy had his heart set on participating in the competition. That never happened.

“They just walked off and left us,” said Trish, speaking of Smiley and Co.

Fortunately, somebody with real class showed up, and took things in hand.

Ruth Holladay has the story.