A tepid reaction to HD receivers
Ever been tasked with turning out a glowing report about something that, when you looked into it, just didn’t quite manage to pique your enthusiasm?  I suspect that’s what happened to Katherine Boehret during her survey of three HD radios, as reported in today’s Wall Street Journal. 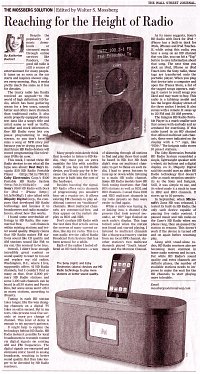 Boehret spent a week testing the sets- one a straight table radio, one which included an iPod dock, and a portable. She also talked to the technology’s developer, iBiquity Digital, and her piece includes the usual iBiquity talking points- that HD means improved sound quality, and that there’s no extra cost (beyond hardware) for HD reception. She clearly describes how HD radio works, but also makes the common mistake of calling it “high definition;” the “HD” - supposedly - has no special meaning.

In short, she likes the sound (and some of the additional programming), is intrigued by the tag-songs-for-purchase capability of the docking set, but is less than enamoured with some of the technical wrinkles:

Washington, D.C., where I live, supposedly offers 41 HD Radio channels, but I couldn’t find as many as that...

Tuning in each HD station takes longer, like the way changing channels on a digital TV takes an extra second.  But in my tests, this process took five seconds or more per change of channel...  While a radio was tuning in... an “HD” logo flashed on each radio's display.  This logo turned solid when the station was found and finally started playing...  This kind of delay is enough to try anyone’s patience.

Each of the radios I tested offered an HD Seek feature—a way of skimming through all stations to find and play those that could be heard in HD.  But HD Seek didn’t stop on multicast channels; to get to those on each radio, I had to press buttons to tune up or down while already listening to to a main HD radio channel.  Some HD Radio models have HD Seek tuning functions that find HD1 stations as well as HD2 and HD3 channels.

Aside from the delay in acquiring signals (which is inherent in the system and apparently can’t be fixed), these all sound like new-technology teething issues.  The problem is, HD radio has been around for five years or so, and one would think that by now the sensitivity problems[1] and interface awkwardness would have been worked out.

The praising-with-faint-damns moment actually comes in the fourth paragraph, when Boehret nails HD’s chicken-and-egg (or elephant-in-the-room, if you prefer) problem:

Overall, I didn’t hear enough incredibly great content or sound quality to want to run out and replace my old radios.

And she’s in a major metro area.  ’Nuff said.

-----
[1]  iBiquity’s representative made apologies for the performance of the Coby Electronics model tested, saying it “uses an older... technology that doesn’t offer as much reception sensitifvity.”

1 There are only half a dozen additional channels to be had on HD in this market, and none of them are exactly compelling.

“Smokin’ US-30 Dragstrip . . . where the great ones ride!”  Simple words on a screen don’t do justice to the tag line of that (in)famous commercial.  If you listened to WLS or Super CFL as I did in the ‘60s and ‘70s, you’ll never forget the turbo-charged voice of Jan Gabriel who, with the help of some technical wizardry, made that commercial blast its way out of your transistor radio.

For five decades he worked as a disc jockey, TV personality and executive of an ad agency.  But he’s best known for his in-your-face US-30 Dragstrip commercials, a concept he conceived himself....