Shortage of (political) capital
Thursday’s Wall Street Journal included an editorial (“Political Credit Cards”) that, in anticipation of the forthcoming “little friendly arm-twisting session over their rates and billing practices” with the President, lamented the political reaction to the credit card companies’ recent (and widespread) increases in interest rates and reductions of customers’ credit lines.  The editors reviewed the industry’s problems:  Rising charge-offs and delinquencies, the collapse of the securitization market, and new federal rules that make doing business more expensive and difficult.[1]  Along the way they went after administraton demagoguery (from Larry Summers), and Congressional political opportunism (from the 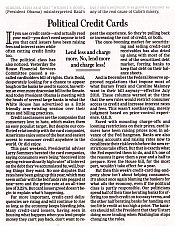 likes of Chris Dodd and Barney Frank) as being unhelpful and dishonest.

It “...isn’t about helping consumers,” the editors say.  “It’s about once again blaming the bankers for what ails the economy, even if the political class is partly responsible.”  Doesn’t the public realize that the politicaians’ meddling may wreck “the best and easiest access to consumer credit anywhere in the world”?

Now this is a difficult position to sell, even under the best of circumstances.  As the editors admit, “Credit card issuers are the companies that consumers love to hate, which makes them an easy populist target.”  But while nobody loves his creditor, might I suggest that the last few weeks’ political bloviating would have had considerably less resonance among the public at large if the card companies had been making the slightest effort to be a bit more customer-friendly.

A quick trip through the archives at The Consumerist yields story after story of stealth due-date changes, proliferating fees and penalty charges, unannounced credit-limit reductions (sometimes to less than a card’s current balance, which then generates overdraft fees), unexplained rate hikes for good customers... the list seems endless.  And something else.  All of these practices carry the aroma of cheating.  Or if not exactly cheating, playing fast and loose with the “rules of the relationship” in ways designed to trap the customer into forking over extra cash.

The card issuers will say that what they’re doing is all legal, and all covered in the cardholder’s Terms and Conditions (i.e., somewhere in those ten pages printed in type only slightly larger than in the image above).  Well maybe.  But although you can do something, there are usually various ways to do it.  And even the legal profession (weasels all!) recognizes the difference between “good faith” and “bad faith.”  Look at the “bad faith” words in that list: “stealth” “unannounced” “unexplained.”  Characteristics of an honest business that values its customers?

Managers used to understand how vital it is to make plain that their company is a businesses, not a scam.  But from the confusopolies of the cable and cellular telephone providers to the “you didn’t read our contract, so you’re screwed” attitude of everyone from consumer-goods manufacturers to retailers, more and more businesses seem to be making their operating principle “Get their Money- By Hook or By Crook!”  Well, if you make screwing your customers your primary goal, don’t be surprised that they wind up hating you.

And when those political demagogues set out to ruin your business, don’t be astonished if your faithful customers set aside their self-interest and instead go for the schadenfreude.


Related:
The Wall Street Journal:  Obama Pushes New Credit-Card Rules
Rose Parade:  Is customer service truly a lost cause...?
-----
[1]  either that, or clamp down on some of the industry’s more abusive practices.  Depends on who is doing the talking.

1 I admit to being torn on this matter.  On the one hand, I really don't like the idea of the government insinuating itself into what are clearly contractual issues; on the other, I can't wait to see the bastards get kneed in the groin for their sins against humanity.