Sockpuppeteria
In which nothing is what it seems! Jules Crittenden summarizes, in his own inimitable style!  Read on...

UPDATE MCMLXIX: Someone claiming to be Greg Mitchell at a website purporting to be that of Editor & Publisher asserts that he exchanged emails with someone he believes to be Col. Boylan or possibly someone who has hacked into Boylan’s email. The person presenting himself as Mitchell claims that Boylan definitively stated he did not send the offending email to the person who has been claiming to be Glenn Greenwald. Which means that (a) Boylan is lying or (b) someone else is using his keyboard or (c) Greenwald composed and emailed the offending statement to himself, or (d) a previously unknown personality co-habiting within the entity we refer to as Greenwald. Or as the entity that for practical purposes we’ll refer to as “Greenwald” claimed in the Greenwaldian puppetry matter (e) maybe someone in his household did it. I don’t know. In any case, it remains funny that whoever did that mocked Greenwald by saying he lacks the ethics of a journalist.

(Quoted only because it's amusing.)

For the background to all this, start here.
For earlier sockpuppetry that may have involved someone who claimed to be at least one of the current protagonists, there's this.

"Comcast users are reporting 'connection reset' errors while loading Google. The problem seems to have been coming and going over the past few days, and often disappears only to return a few minutes later. Apparently the problem only affects some of Google's IPs and services. Analysis of the PCAP packet dumps reveals several injected fake RSTs, which are very similar to the ones seen coming from the Great Firewall of China [links in original - o.g.]-- Slashdot: Google Caught in Comcast Traffic Filtering?

If Comcast gets enough major players angry, we might– possibly– get to the bottom of this.

God bless you, Mr. Johnson
Read it.
Via: Tam

Two Senators on Friday called for a congressional hearing to investigate reports that phone and cable companies are unfairly stifling communications over the Internet and on cell phones.

Previously: Elsewhere (via Consumerist):
Stephen Wildstrom: Get Your Hands Off the Web

I’m going to go out on a limb here and guess that when faced with an alien menace, the Dems will be mainly interested in trying to figure out why they hate us. Expect to see Richard Dreyfus as secretary of alien affairs. On the Republican side, candidates have been largely silent. Only Giuliani has come out for a strong extraterrestial defense.

Apropos of nothing, anybody else remeber the Firesign Theatre's spoof of the  "Aliens must report their addresses annually" radio spot back in the 1970s? 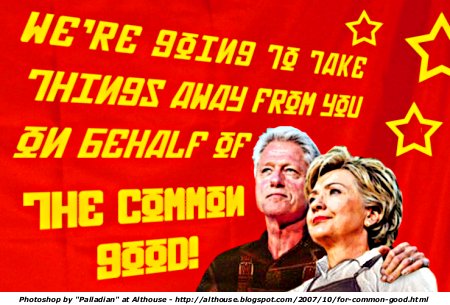 "Palladian photoshopped that crazy photograph from the WaPo [actually the Los Angeles Times - o.g.] article I was talking about earlier today." - Ann Althouse

(In the comments, Palladian says, "I would have done the same to any politician photographed in that way, though being able to use Hillary Clinton's old quote made them an especially good target.")

More mindless MBA-ism
Sometimes there's advantage in coming late to a story.  When you're late, you get to see all the fallout, which is a good way to learn lessons. This story about Angus & Robertson Books is one of those lesson-learning opportunities.

Another of those Weblogs I Don't Read Often Enough[1] is Making Light, home of sci-fi editors/publishers Teresa & Patrick Nielsen Hayden. It's a good place for "inside baseball" stuff about the book business, lots of valuable discussion about the craft of writing, and the occasional dose of pure whimsy. Today's perusal turned up this post (from October 9th, about sock-puppetting in comment threads), which was based on the comments to this one, about how the Australian chain bookseller Angus & Robertson is trying to extract money from small publishers on the pretext that doing business with them isn't "profitable enough." The A&R story is the one that caught my eye.
more...

Add 'em to the book
4. All great discoveries occur because of a random accident colliding the irrational persistence of a man who didnt know any better than to keep working when everyone else had already given up.
7. The core idea of western civilization is the phrase "none of your business".
8. The core idea of fascist and communist thought is "you have no business".
10. The collapse of civilization begins when your next door neighbor takes an interest in what's on your side of the fence.
Read them all: Varifrank's Laws

Bullseye of doom
Click, if only for the Photoshop.

Serving "the public" versus serving "the customer"
"Squander Two," while railway blogging, nails the distinction (but do read the whole post):

I think I'd extend this to include private companies in pseudo-monopoly positions.  If your patrons have little choice, there's little incentive to please them.