Somehow in the midst of Monday...
I managed to miss the Morse code geekery.  But that’s a great thing about the internet:  Stuff hangs around (at least for a while).

Start here (Hey, Roberta, did’ja get your mail?), then go here, and here.

Related:
Jeffrey Herman:  CW on 500 KHz
(O.G. took a run at learning International Morse about 35 years ago, but never completed the process:  Like the Pogo character “I can write but can’t read,” having about 90% of the character-to sound table still in memory, but no facility with the reverse.

Later I got involved with “professional” radio (hey, it’s “professional” if you get paid, right?), where my only encounter with Morse was hearing the “ • – –   • – –   • • • – ” top-of-the-hour ID from the National Bureau of Standards station WWV when we synced the studio clocks.)

Embarrassment... (Pause. Resists temptation.) discovered
Some folks are good at recovering after an error, others not so...

Start here (where it was first... erm... “spotted”), then go here (where there are screenshots).

(That the individual involved happens to be a pompous lefty makes the circumstances only more tasty.)

“...because kittens and explosives don’t mix”
Does make a cute picture, though...
Via:  SayUncle

Early one morning at the supermarket
“Hey look! Free car!”

Happy 7th, Mark
(What would you do if I sang out of tune?)

“It was seven years ago today[1]
Mark ’n’ Dolly taught the band to play
They post every time they’ve got a chance.
And-tho they’ve never had an Instalanche[2]
If Liberty’s[3] what you’re about
Then you really ought-a check ’em out:
Mark and Dolly’s
BabyTrollBlog
Land!”
-----
[1] Actually yesterday, but what’s one day in seven years?

[3] “You may not be able to impose democracy on a country, but you sure as hell can impose socialism. Stop it!” - Dolly 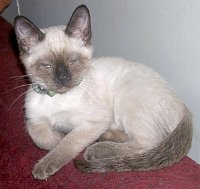 He’s been feeling poorly here of late.  Then, Saturday, he got boosted. All the good vaccines and stuff...

...So soon after losing Siamon, we’re (I hope understandably) paranoid.  It would be a mitzvah if you could keep him in your warm thoughts over the coming days.

Done.  Go and do likewise.

1 I can understand your anxiety. My wife and I have had several pairs of cats over the years.  We seem to inherit elderly cats who need a home.  It's an unfortunate trend that when a pair has been together for a number of years, they grieve as much as we and that produces health problems all their own.

Watch him close and use TLC as needed.

2 Hi Crucis,
This one is Mark's cat, not mine... see the link.  Sky is one of his new arrivals, and may have some settling-in stress on top of other things.  Link here.

I know now that if  I ever need to beef up home security, you don’t need any fancy electronics, big guns, or vicious dogs.  Just tape a simple handwritten sign to the doors...

CNN comes out for “fair use” in reporting
CNN the Latest Corporate Thug to Use Copyright As a Weapon to Eliminate Embarrassing Clips from YouTube
More here (via Likelihood of Confusion via IP):

The purpose for Founding Bloggers’ posting of the CNN footage is crystal clear: to comment on and criticize CNN's reporting on the “Tea Party.”  Such a use is right in the heartland of the fair use doctrine; the statute specifically mentions “criticism, comment, [and] news reporting” as protected uses that are “not an infringement of copyright.”  17 U.S.C. § 107.  To quickly run through the four fair use factors as they apply here:
Many fair use cases are difficult, close calls--but, given the facts as I know them, this is an easy one.

Cats-ing up
(Technical difficulties on Saturday, then time spent pigging out on Ancient. Cantonese-American.Cuisine instead of blogging on Sunday => no posts.  Herwith, some cat-related items that have been waiting in the queue.)

Speaking of Glorious Gingers, want one?  (Earlier.)  (Via Wildrun.)

And Bruwyn is getting bigger.