I'M IN YER MAPZ, SITTIN' ON MY PERCH "Google Maps is spying on my cat!"

The new Google Maps zoom feature zooms all the way into my living room window. See cat on cat perch.

Okay, is this really evil, or just REALLY strange?
I HAS 1337 CODE.LOL
(If this totally mystifies you, try starting with this Fark thread.)
Blame McGurk for spotting this first.

Now that the term "torture" has been put in one-to-one correspondence with such admittedly unpleasant activities as punching, sleep deprivation, a handkerchief pulled over one's face and loaded with water, searches by women upon sensitive Islamic men or the disrespectful handling of Korans -- what on earth do we call gouging people's eyes out?

Cynic that I am, I've long wondered how the members of the "pomo community" would react if they found themselves the objects of  some good old-fashioned line-'em-up-against-the- wall-and-shoot-'em repression. Godwin's Law (or maybe, The Boy Who Cried "Wolf!") in practice: When you label everyone who disagrees with you a "Nazi," what do you say when the real Nazis show up? 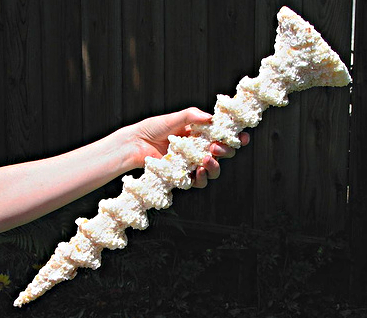 This is a model of a drywall screw. It's 20 inches long and is made out of sugar. On a homebrew 3-D thermal fabricator. Other objects made so far: A dodecahedron, a toroidal coil, and some CNC (computer numeric control) toast (branded "HELLO WORLD"). Story and more pictures here.

On yer bike Wonderful comment about commuting by foot and bicycle in London by Richard Hyett:

One fateful day I resolved never to use the tube again. What finally pushed me to this decision was getting stuck in a tunnel on a congested train for a long period. Its one thing to be stuck in an overheated train, when you have a seat to yourself. Quite another when you are packed in like a sardine, can't stand up straight, can't move backwards or forwards and have not the slightest idea whether you are going to be in that position for five minutes or fifty minutes... By the time the train eventually moved 20 minutes later I swore that never again would I put myself in that position.

So for the next year he walked– and then bicycled– the 5½ miles to work. And lived to tell the tale!

I could walk (or cycle, if I owned a bicycle) to work– it's only about 3 miles. I've actually done it on occasion, including one two-week period when I was between cars. But then there's the problem of mid-day errands, and also the problem of early darkness in winter. (And laziness, I'll admit...)
-----
Via Diamond Geezer, who linked to Andrew Denny, who mentioned it in this post. Ain't the interweb grand!

Lileks! What do you think you’re doing? While you’ve been hanging around here, you’ve already been scooped by the Eden Prairie News on the Kite Fest at Purgatory Creek, and the Coon Rapids Herald is way ahead of you on the debate over the new community center. Where’s that ol’ Jimmy Olsen spirit?

Something for your geek girlfriend Neurotransmitter Earrings

(They also have testosterone-emblazoned boxers.)

1 Mookie has been STRONGLY hinting for me to go to the website where she found this item.  Her birthday is on the horizon and she wants the "caffeine" necklace.....Bunny aka, Mookie's Mom