“We could try liberty.”
Jerry Pournelle:

The only remedy will be to raise taxes.  We must have shared sacrifices so that the Washington elites can go about business as usual...

In other words, the Dance goes on...

Those on the right are Enlightenment thinkers, and assume that everyone shares certain assumptions about debate and logic.  But the left denies the fundamental tenet of the Enlightenment – that there is an objective reality we can measure things against.

Since the other side is debating by completely different rules and assumptions, it’s literally impossible to come to agreement with them.  Even if you think you did, they reserve the right to redefine terms as necessary to further their objectives.

When they do these things, it’s important to understand that they don’t believe that they are lying.  Since their concept of truth is different from those on the right, their concepts of dishonesty and deception are different too.

Danger: Banjo Proliferation
(There’s an accordion in my closet.  Please don’t tell anyone...)

"Mom! The turkey blew up”  Dept

Brigid’s Guide for Bachelor Cooks
(I’ve never had to scrape scorch marks off the ceiling.  So far.)

But big words are HARD!  Dept

The Stupidification Of America
(Because ABC thinks you’re dumb.  Or maybe because they are.)

Ah...Brigid minds me of the time Mom was making a chocolate pie but couldn't find the double-boiler to melt the chocolate in.  So she tried two saucepans instead.  Unfortunately they were kind of a close fit. And she wasn't paying attention when the water boiled in the lower one.  Can you say "steam explosion"?

Including behind the furnace (which was in a louvered-door closet in the kitchen) when we took it out years later.

We still laugh about it, Mom included.  But it sure wasn't funny at the time.

Exemplary, my dear Monckton
Ever have a need to call out some idiot?  Viscount Monckton of Brenchley demonstrates how it’s done:

Whereas one Malcolm Turnbull, Member of Parliament for Goldman Sachs, self-appointed leader of the Absolute Bankers’ Get-Rich-Quick, Gimme-the-Money, Subsidy-Junkies’, Profiteers’-of-Doom and Rent-Seekers’ Vested-Interest Coalition Against Hard-Working Taxpayers, has this day demonstrated wilful but indubitably profitable ignorance of elementary science by declaring that since all relevant matters of climatology are settled no one should pay any heed to a mere Peer of the Realm who dares to question the imagined (and imaginary) scientific "consensus” to the effect that unless the economies of the West are laid waste and destroyed we are all doomed;

“...not the new FDR, but the new Gorbachev”
Obama presiding over a doomed party?

And when other peoples’ money runs out...?

...although he misses all the "clients” whom such spending "buys.”

Michael Walsh:  "When did it become the primary function of the federal government to send millions of Americans checks?”

Seems there’s not much “hope for change” out there...
Insta-poll: So what will happen with the debt ceiling fight? 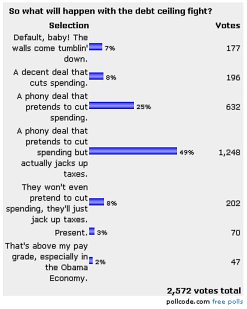 Long winded explanations from various gentry GOP shit sandwiches and RINOsaurs about how "this was the best deal we could get.  Trust us.  Vote for us next year. We have only your best interests in our hearts.”

Imagine if Hitlerian fascism had presented itself as a religion: "You must worship the ancient German storm gods, who require that you conquer the world in their name, and impose their rules controlling all aspects of individual living and worshiping on all nations and peoples.”

So, what is this?  A religion?  Or a ruling ideology with a religious component?  And how should you treat it in terms of American notions of freedom of religion?

The question is Islam.  The decision point will be here much sooner than most people anticipate.

Indoctrination outweighs education
...at the University of California:

Even as UC campuses jettison entire degree programs and lose faculty to competing universities, one fiefdom has remained virtually sacrosanct: the diversity machine. Not only have diversity sinecures been protected from budget cuts, their numbers are actually growing.

But that’s their primary mission, innit?

All you need to know about Mitch McConnell
Stacy McCain:

It is a fact of history that no one has ever tried to assassinate a Senate Republican leader — not even the wildest madman would bother wasting ammunition on such worthless creatures.

As they say, RTWT.

Got’cher “Top 10 List of TSA Suspects”...
It only hurts when I laugh  Dept