Mike Hendrix loses a buddy
And God knows that Mike, of all people, doesn’t deserve it.  Go pass along some support, if you’re so inclined...

Because nothing says "casual elegance" like a dead squirrel
dri and Ace review the Paris Fall Fashion Week.

No wonder it doesn't work
Thousands Standing Around, with 26% attrition.

My boy just got the practice version of the Oregon Standardized Math Test. This Sample Test is intended for Grade 3.

The test is a putrid example of how bad these standardized tests are. As near as I can tell, it's a combination of testers being proud of how well they can trick third graders, and utter ignorance of basic mathematical principles. - Bart Massey

He has example questions. Go and be properly appalled.

But foreknowledge in the absence of intervening circumstances. (The 17-year-old boy targeted for a traffic accident next Tuesday might fall down the stairs next Monday and wind up spending Tuesday in the hospital, in traction.)

Thompson raises the problem of obtaining coverage for predicted conditions, or at least coverage that anyone could afford.

Why would any insurance company sell you such a policy, knowing ahead of time that they'll have to pay out on it?

(Well, in some cases they might not have to. What if you sign up for cancer coverage, then walk out the door and get hit by a truck?)

Or, if they did sell you such a policy, it would really just amount to a prepayment of the costs they know they'll incur.

Big companies do that all the time.[1] And individuals do, too. Ever heard of life insurance?

We insure against certainty all the time. Even if you live in Florida you can still buy hurricane insurance.[2]  So the insurance industry will take care of itself.  But then there’s the government...

-----
[1] It’s called self-insurance, and they do it when the cost of a third-party policy exceeds the actual cost of losses minus the return obtainable from creating a reserve fund and then investing it.
[2] Not as cheaply as hurricane insurance would be for someone in North Dakota, but as risk approaches certainty, the cost goes up. TANSTAAFL.

Inflation May Be Worse Than We Think
By DAVID RANSON

Historical CPI data in the U.S. are complicated by occasional changes in the methodology the government uses to calculate the index. In the late 1990s, one of these changes reduced the reported inflation rate significantly. But taken as a whole, the relationship suggests my following rule of thumb to estimate CPI inflation at any time: Divide the percentage change in the gold price from eight years in the past by 80, and add three. This rule of thumb has largely worked over the past several decades. In the last eight years the price of gold has risen 225%. The rule therefore comes out with an answer that puts inflation a lot closer to 6% than 4%.

...Since the summer of 2007 — and especially in recent months — there has been an alarming rise of inflation.

Economist Brian Wesbury says the Fed is in denial about rising prices. I think he’s right...

...using the so-called core inflation rate (which excludes food and energy) simply makes no sense over longer periods of time. In other words, core prices from month to month, and quarter to quarter, may be useful guides for the Fed, but they are no longer useful over periods of 12 months or longer. The rise of inflation, measured as a 12-month change, is truly significant over the past 4 months...

Incidentally, one of the reasons why voters are so negative on the economy is the increase in the price of energy, gasoline, oil, home heating fuels, and food.

Can you say “stagflation,” boys and girls? And would President O'Clinton pull a Nixon and say, “wage and price controls?”

This is nothing new. What’s important is that it’s beginning to get coverage outside of the blogosphere.

Follow up: Chicago's most beautiful cat
So who won? Nobody I picked, but a fine fellow nonetheless:

Was it the blue eyes? Gorgeous fur? Enormous fan base? Probably a litte bit of everything. 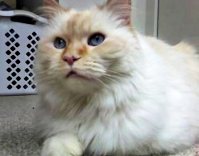 Congratulations to Solomon on a hard-fought battle, and to all the cats and cat owners who participated. - RedEye

There is a beautiful flock of blue birds flying up through the stairwell leading to Sheffield's Graves Art Gallery.

TLC has pictures. Go and see them!