SofTest: Just say no
Let’s Kill Bad Software Dept.:
“I’d mark this (SofTest) rant as ‘NSFW,’ were I you.”

and says it’s time for a Weekly Standard Swimsuit Issue.

What would it have been like to fight up close and personal with such a weapon?

Answer: “In the world of Hope and Change, you’ll take your cheese and LIKE IT!”
But what if I don’t want my car running on cheese? 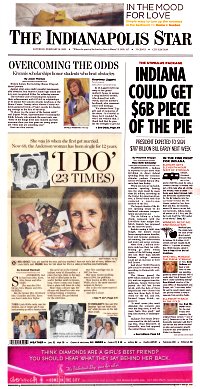 Indiana could get $6B piece of the pie

Largest chunks of direct spending would be for Medicaid, education, transportation, general aid.

In early September [2008], a colony of over 40 cats was discovered living in the dilapidated buildings of an abandoned manufacturing site just north of Cincinnati.  Bud, the kind-hearted watchman on the site has been feeding them, but can’t afford to get them spayed or neutered and their numbers are rapidly increasing.

A group of artists across the country is creating art inspired by these cats. Through an auction of these donated artworks, our goal is to raise enough money to have all the cats spayed and neutered, provide medical care for any who need it, and get as many cats as possible into foster homes or permanently adopted.

Join us on Saturday, February 14th for the Factory Cats art show opening celebration at the Loveland Art Studios on Main from 6 to 10pm.  Bidding on art begins as a silent auction at the opening and continues on eBay for the following week.
Project Home Page
View the Art
Meet the Cats
Via: Wildrun

1 Thanks for giving them a shout-out!

2 Glad to assist.  Wish I could make it down this evening.

It’s made of Bakelite, it weighs fifty pounds, and that thing at the bottom is a brass handle.  Presumably so I can do preacher curls and build my biceps while I chat with my girlfriends.  As if.

Mr Tree was close to tears when he was reunited with his new furry friend at the Mountain Ash Wildlife Shelter in Rawson, where Sam is recovering from third degree burns to her paws.

The pair became accidental faces of the devastating bushfires when Mr Tree gave an exhausted Sam a drink from his water bottle in the middle of burnt-out bush in Mirboo North.

Pictures at both links.

Caltechgirl gets the Gannett Treatment™

Gross $$ mismanagement means we are losing both faculty and programs.  And no, they won't tell us who yet.  10 days to sweat it out.

Anybody know anyone looking for science PhDs? - Not Exactly Rocket Science, February 6, 2009

More Bad Management:
For Radio Consolidators, No Plan B