Piling on
Here-we-go-again  Dept
Instapundit linked this, but wotthehel...

New Dell Support Policy: Hang Up On Customers Who Ask to Talk To Your Supervisor

Oh, Dell.  I thought since Jeff kicked you around the block way-back-when, you had learned your lesson.  I thought you had changed.  But here you go, breaking my heart again.

Read on, for a blow-by-blow report.

One of his commenters suggested writing Michael Dell. Who is probably too busy making money off the taxpayers with George Soros to reply. 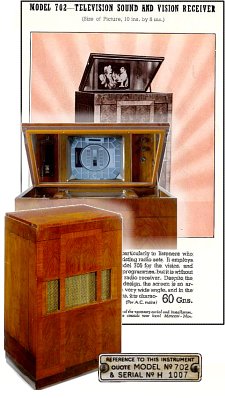 One of Britain's oldest tellies - set to go under the hammer later this month - is 75 years old and surprisingly still in working order.

When the Marconi Type 702 was made, in 1936, the BBC had only been broadcasting television shows for three weeks, offering just two hours of programming a day on one channel.

The set has a 12in screen wrapped in a oversized walnut and mahogany cabinet, with a mirror-fitted lid that pops open to reflect the upward facing display out toward the viewer.

It has the original 240/405-line selector switch in place... Around a third of the TV's parts are not original, however, though they were replaced with parts identical to the originals.

Included in the package, the original bill of sale, the owner’s manual, and a 625-to-405-line standards converter which brings the set’s capability up to the 1964 transmission standard (however, you’ll need an additional converter after 2012).  Excellent condition (maintained, not rebuilt), only two owners... estimated sale price £3,000 - £5,800.
Details (and more pictures) here.

Previously:  The mystery would be: How to pay for it.

1 Just wrap that up and send it 'round -- along with the big stack of additional converters  it would require to make pictures in North America.

A remarkable offering.  There's a fellow named Andrew Emmerson (of 405 Alive! fame) who truly should own this set.

2 You’ll probably enjoy poking around on that TVHistory site. The gang down at the skunk works might enjoy ads like this one from the period.

The “High Definition Television” it promotes is, of cource, the Marconi’s 405-line standard picture, viewed on a 12" diameter CRT.