Check your toolbox
...against Brigid’s list (and don’t forget the Band-Aids!).

No matter what we screen for, no matter how much we irritate and inconvenience passengers at airports, the bad guys will figure out new ways to bring potential death aboard our planes.

The real trick is screening out bad guys.  But to do that would require a cultural will the West has not yet shown itself capable of.  It would require us to admit that young Muslims -- mostly young Muslim males [with radical connections] -- see themselves at war with the West, so they require a special level of scrutiny from security and intelligence forces.

It’s not “the West” that lacks the cultural will, it’s “the West’s Progressive political establishment.”  Otherwise, I’d agree.  (And Gunter isn’t saying “profile all the Muslims,” either... RTWT.)

The Israelis, who know something about airline screening, use the concept of keeping  people, not things, off of planes.  We waste our time on “stuff,” to avoid offending the folks who might put it to evil uses.


Via: Kathy Shaidle, via American Power

The posters were hung, search parties formed, Craigslist notified. All the neighbors were on the lookout for the little gray kitty that went on daily walks with its owner, seven other cats and two dogs.

But the hours and days passed...

The old familiar story, except this time there’s a happy - if painful - ending.

“To capture the public imagination … we have to offer up some scary scenarios...”
Amaze Your Friends & Confound Your Enemies Dept
Thirty Years of Climategate - timeline chart

This is a suicide fantasy, exactly like those many of us indulge as teenagers: we’re so much wiser, smarter, and empathic than the bummer adults running the world around us.  They don’t understand the mystic truth burning in our young hearts.  They’ll be sad when we’re gone, and they’ll finally realize how righteous we were.  They’ll finally understand their grim obsession with money and material goods is soul-crushing, because they’ll be standing over the pulverized dust of our radiant souls.  Death and tragedy will tear the scales from their eyes.

The can of holistic whup-ass opened by the magical world of Pandora at the end of Avatar comes from the same grocery of doom that supplies George Monbiot and Polly Toynbee with their nightmares.  ...Understand they don’t really believe those things will happen – no one is stupid enough to believe the twaddle about submerged cities dispensed by the global-warming cult.  They want those things to happen.  They daydream about glaciers melting and creating tidal waves that deposit soggy clumps of coral reef and rainforest in the middle of London.  They shudder with orgasmic delight as they imagine drowning capitalists and politicians coughing out a spray of ice water, dodging the enraged polar bears swept into Fleet Street by the morning tide, and crying "George!  Polly!  You were right!  You were right all along, and we were so blind…  Save us!”  But it will be too late, and George and Polly will only be able to fold their arms and blaze with smug satisfaction, glowing bright enough to remain clearly visible as they sink into the frigid depths.

but in the comments, "Crawford” notes

The Monbiots, Toynbees, and Camerons don’t want to die.  They want those people to die — the ones who get in the way of their perfect society.  They want us to die.

The distance between Devon and Columbine is less than most people might think.

Joy of cardboard
It’s Myst’s first Christmas, so she’s enjoying all the boxes...

Not advised for the morning after...
Möbius Bagels

Hmmm... does the solution require calculus?  (Think about that over your first cup of coffee.)

Credits:
Discovered by Finestkind Clinic and fish market, and linked by C.G. Hill 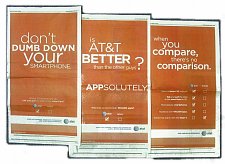 ...can be cheaper than fixing your network.


Elsewhere:
AP:  AT&T: Tighter control on cell phone data usage ahead
BoingBoing:  AT&T is the best network in the U.S., say AT&T consultants
WSJ/Digits:  AT&T to New York and San Francisco: We’re Working on It
Tom Limoncelli:  “...it just reminds me of why I was so happy to leave.”
Related:
Clayton Jones:  “Big business doesn’t move that fast”.