A GPS receiver and a GSM modem with special software is incorporated into the Pet Tracker. Allows you easily and remotely monitoring the location of your cat via your cell phone/mobile phone anywhere in the world with suitable GSM coverage...

Simply call the telephone number of the Pet Tracker collar with your handy mobile phone/cell phone. The GPS receiver of the collar, estimates the position of your cat and sends the coordinates immediately as SMS (Short Message service) over the Global System for Mobile Communication (GSM) directly on your mobile phone display. The accuracy of the positioning of your cat amounts to the average less than 15 meters.

They say they're "not selling this product" yet, but stay tuned...

Meantime you could just give the cat a camera, and let him take pictures as he wanders the neighborhood.
-----
Thx: Sansserif for the tracker, and Sharon for Mr. Lee.

Not everyone cared for Frank Sinatra's habit, in concert, of crediting Rodgers and Hart and Cole Porter and the other composers and lyricists of the songs he sang. And there were moments when even he seemed to acknowledge there was more annotation than anybody needed. A decade or so back, I heard him deliver the following intro:

Here's a marvelous song written by Orlando Murden and Ronald Miller. Whoever the hell they are.

Pour yourself a cup of coffee, as Mark Steyn tells you who.
-----
HT: Howard

No thanks, I just won't fly And speaking of the TSA, Bruce Schneier has done an interview with TSA head Kip Hawley.  First installment (of 5 parts) is here.  Not very impressive. 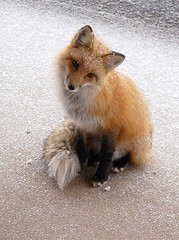 "This brave fox wandered up on our porch. He's half cat, half dog, and all cute. When the fox first came for a visit we instantly named it "Freddy the Fox." But after we got to know it we found out Freddy is actually Frederica."
-- Rob Lee

Somebody start popping the popcorn Then we can sit back and watch...

..If the owner of a local business has gone through the trouble of specifically buying an ad on Fox News, it's because he wants to be there and he wants to target Fox News viewers. And such an advertiser more than likely has certain views about MoveOn. I can only imagine what the conversation will sound like when a self-appointed MoveOn monitor calls up Joe's Bait, Tackle & Hunting Supply to say he should remove his ads from Fox News. -- Ken Wheaton, adage.com [bolding mine - o.g.]

It'd be even more fun if MoveOn stopped by for a chat. Hee Hee!
-----
Background here (But read the adage.com post, too.  It must have been a slow news day at the AP.)
Hattip: IP.

The next internet sensation? The BBC's iPlayer, its on-your-computer on-demand television service, begins open beta today. (Details below the jump.) Will it be the next internet phenom?

Martin Belam predicts how things will play out:

Day #2: The press reports that the BBC website 'crashed' due to demand for the iPlayer, because someone emailed someone at The Telegraph saying they couldn't download it over their dial-up connection.

Day #5: First reports of an exploit of the iPlayer's DRM system begin to surface on the web, and links to a hack appear on Slashdot, Digg, and, by mistake, on the BBC News site for five hours.

Day #6: The BBC's backstage.bbc.co.uk mailserver melts under the weight of multiple gloating anti-DRM posters saying "Told you so. Linux rulez teh internets".

It's profusely illustrated, and funny. Go read.
-----
Via Diamond Geezer, who got in early for the closed beta.
more...

Recommended weblog: Dustbury (Dunno whether this is a good idea or not, given previous performance: The last time I promoted  somebody they stopped posting 25 days later, and haven't posted since. However...)

My personal blogroll (the one in my bookmarks, not the one to the right) includes far more sites than are listed on the sidebar (which doesn't even list all the ones I check regularly). But since I don't have 24 hours a day to read blogs, and thus can't visit everybody every day, it's easy for sites to get semi-forgotten. Fortunately, I often find bookmarked sites turning up in someone else's posting-- which encourages me to revisit them and rediscover why I bookmarked them in the first place.

Which brings me to dustbury.com, Charles G. Hill's "Web Pages, HTML Bad Example and Bandwidth Wastage Station" headquartered out of Dustbury, Oklahoma, USA (Apparently pseudonymous– at least I didn't find it in my Rand McNally– but, from context, somewhere near Oklahoma City. Or possibly it's some Okie joke that I don't fathom. Whatever. [Later: DUH, it's in his FAQs.]).

He's been on the web for a coon's age, writes engagingly, has wide-ranging interests,[1] and is a heckofalot less political than me, at least on his main page. Regular features: Strange Search Engine Queries, and the annual road trip (just completed). Visit his July archives, and be amazed/appalled by topics such as moving the nation's capitol to Oklahoma, electrically-operated lawnmowers, basic training, cable barriers on highways, what's to like about Sprint, the guy who rebranded his Bentley as a Hyundai, and the aforementioned Road Trip. And he knows who The Goons were, and reads the Evil Overlady.

I discovered Charles's site in June, 2002, and don't drop by near as often as I'd like to. (If that makes any sense.)

[1]He even blogged the WCBS format change, and before I did! Great minds, etc...
-----
Thanks to Andrea for the reminder.

1 I suspect I'll be around a bit longer: this is year 12 of the site, and my hosting bill and domain renewal are paid up for a while.

Blue Witch gets a "new old broom" Her name is Mi1dred. And I'm jealous.

The story so far:

Y'know, if my mother had ever caught me using language like that, she'd have smacked me sideways and then washed my mouth out with soap. "Head Heeb" indeed!
-----
via LGF
[1]Used LGF's title instead of Pop Machine's, 'cause Harry has nothing to do with it.

1 I have to say I am speechless. I thought these guys were all about tolerance and acceptance. Isn't that the p.c. way of the world? We don't judge, we accept. The playing field is level and everyone has a right to dramatize...ah...er express their feelings and traditions. Apparently, only select groups get those privileges.
WC