Minor difference
Can you tell

?
A lot of people seem to have problems.  See this fascinating post on “modal deafness” by Mark Liberman at Language Log.


Via “Mætenloch” in (believe it or not) the AoSHQ overnight thread

1 Thanks for posting that! I was able to tell the difference in the examples, however I recall being perplexed by my college roommate when we took classical guitar lessons together and she could not tell the difference between certain notes in a progression. I just assumed it was a matter of experience/exposure. Perhaps not!

[Newly-elected New Jersey] Governor [Christopher] Christie on Thursday promised to eliminate a number of New Jersey boards and commissions where political appointees are... able to pad their public pensions, in some cases mostly for attending monthly meetings.
...
[In] the outgoing administration’s final days, ... Gov. Jon Corzine appointed dozens of Democratic aides and department heads to government boards overseeing such professions as marriage therapists, contact-lens dispensers and veterinarians...
...
Most, if not all, of [the appointees] will have no [other] job in the new Republican administration.  As board appointees, however, they can add service years toward a pension — meaning they can earn credit toward the 10-year minimum to qualify, or increase their retirement payout if they’re already vested.

“This is stuff that’s been done by previous governors and previous administrations to keep their friends in the pension system in order to accumulate the number of years they need to get the maximum amount of payoff they can get from the taxpayers,” Christie said.  “It’s wrong.  It’s wrong when Republicans do it.  It’s wrong when Democrats do it.  In the end we are fleecing our own state.”

And he has landslide-level public support for going after public-employee pay and headcount:

Gov. Christopher Christie enters office with a 33%-27% approval rating and a go-ahead to cut state spending, layoff state workers and freeze their salaries, and continue his fight on corruption, according to a Quinnipiac University poll released today [January 20].
...
By a 58%-35% margin, New Jerseyans support layoffs or furloughs of state workers.  In union households, the total is 50%-44%.  Freezing wages for state works also gets statewide support, 71%-23%, including 62%-38% among union households and 64%-30% among Democrats.

Keep an eye on the Garden State...


Related:
Bergen County Record:  editorial: Parting Gifts
Both via The Coalition of the Swilling: 1, 2

The purges (and threats) commence
Thunderheads to port  Dept
And the public reacts:

When men like me are absolutely convinced that there will soon be blood in the streets, and are perfectly willing to personally take part….when we start to fill our basements with amunition and canned food…..when we go so far as to have a well driven from inside the basement itself….when men like me do those things and even further….when my wife admits I’m not being a lunatic

there is a problem.

A famous painting, a famous warship
J.M.W. Turner painted it on the way to its breaking; it fought to relieve Nelson’s Victory at the Battle of Trafalgar. 185 feet long, 205 feet from keel to masthead, its statistics are amazing. Sam Wills has scoured the Admiralty archives to produce a new book about it, and The Daily Mail has an excerpt.

A cat which became famous for catching the same bus every day for four years has been run over and killed - while crossing the road to catch its daily lift.

Crafty Casper died in a hit and run accident as he tried to board the No3 service.

He hopped on the bus around 10am every morning and sat on the back seat throughout its entire 11 mile route...

1 Somewhere out there, some poor soul watched the news, then went out and looked at his front bumper and muttered swear words under his breath.

So what happens if both Conan O’Brien and Jay Leno decide that they’ve been screwed by NBC...?

He offers some ideas. 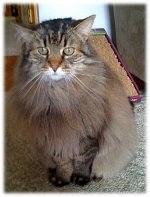