Welcome to the brave new world of "unproperty" Ken Fisher, at Ars Technica:

...After Google takes its video store down, its Internet-based DRM system will no longer function. This means that customers who have built video collections with Google Video offerings will find that their purchases no longer work. This is one of the major flaws in any DRM system based on secrets and centralized authorities: when these DRM data warehouses shut down, the DRM stops working, and consumers are left with useless junk.

Technology marches on ...whether we want it to, or not.

Don't expect to sleep past your stop any more, because this bus wakes you up every couple of minutes by telling you where you are and where you're going. "This is route N73 to Walthamstow Central" "Marble Arch station"

This week, a bridge failed. It was not, particularly, an engineering failure. The bridge had stood for some 30 years. It was a management failure.

I like the way this guy thinks
"So here’s my global-warming-fighting plan..."

Cue scary music
The night the voicemail lady called him back.
-----
[Stumbled upon while getting caught up at Dustbury, and dammit C.G., this means that now I've got another blog in my bookmarks!]

35W Bridge: support points of the main arch
Here are details pulled from 2 images in Eric's (ebrandt78's) Flickr set (images link to the complete photos; the entire set is worth a look): 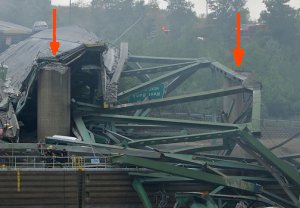 South Piers (looking approximately south-southeast from the north shore). The piers (tops marked by red arrows) appear substantially unchanged. The trusses appear to have walked off the piers to the left (west). 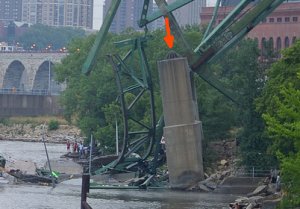 North Piers (viewpoint is from downstream-- east-- on the north side of the river). The north piers tilt noticably to the south. (The western pier is mostly obscured by the eastern one. A part is just visible to the right.) The decking to the north (right) tilted northward, exposing the trusses (see SDB's first photo), which could have created a twisting torque before the attachments broke loose. 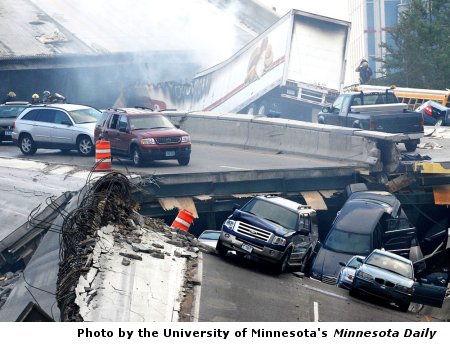 Americans have been squandering the infrastructure legacy bequeathed to us by earlier generations... Many of the great public works projects of the 20th century—dams and canal locks, bridges and tunnels, aquifers and aqueducts, and even the Eisenhower interstate highway system—are at or beyond their designed life span. -- Stephen Flynn

Bridges... don’t vote... It has already been calculated that it is cheaper to pay off the aggrieved after a New Orleans drowns, or a Minneapolis’ primary bridge falls into the river, than to actually fix our ancient infrastructure systems - since doing so would divert too much money from the more politically attractive system of direct bribes to voter segments.
-- Bill Quick

Bewildered? Wake up at the back there —haven’t you got it straight yet? We’re going to be frying and freezing, drowning and dehydrating at the very same time. And carbon emissions will be to blame for the planet getting hotter and getting colder, getting wetter and getting dryer. Because global warming means that whatever happens to the weather, wet dry, hot, cold— it’s all our own fault.

Don't stop there. Read on!