Via:  Fading to Black

“Simon” calls out CNN
in a comment at Althouse:

A controversial claim resting on attribution to an unnamed source, that serves the agenda of the agency? Why should I not think it’s a lie? I say they made it up. Name the source and give us the video of them saying it, or tell us why we shouldn’t think you're lying. You don't get to behave the way you’ve behaved and ask for trust.

In her report on Moody's possible downgrading of The New York Times to junk status, Michelle Malkin concludes with a throwaway line:

Anyone smelling a bailout plea coming on?

I hadn't thought about it like that but now you mention it, it sounds all too plausible.

From time to time[1] I’ve encountered talk about whether “professional journalism” (usually meaning: journalism as presently practiced by most of the MSM) is “commercially viable.”  I expect that in coming weeks we’ll be hearing even more talk (and seeing more stories) about the “vital role” that an “independent, unbiased, speaking-truth-to-power” press plays in a democracy, and how we “can’t afford” to have it disappear.

What won’t be addressed is the degree to which the problems of the press are self-inflicted (e.g., the objectivity issue or the MBA-ization of the media in general[2]).  Equally verboten will be any consideration of whether an organization which depends on the government for its survival can ever be “independent, unbiased, speaking-truth-to-power.”

And anyway, getting the government to pry money out of others to prop up your failing operation is always easier than looking within, finding the problems, and fixing them.  Just look at Wall Street.

Related:
International Herald Tribune:  France looks to save its newspapers
Old Grouch:  Google gives up on “wisdom of crowds,” goes with establishment journalism
Via:  IP
-----
[1]  Mostly in the comment threads of industry-related weblogs. No specific links right now, but I may add some later.

[2]  When your business morphs from “producing a newspaper” to “selling eyeballs to advertisers” to “keeping the stock price up,” management’s attention tends to concentrate on different things.

Hey, did’ja hear anything about this?

We learned at this morning’s Stop Obama Rally here that the McCain/Palin Straight Talk Express came through town yesterday. It arrived with a window shattered by a .22 caliber weapon.  It had also been hit by an unknown number of paint balls from a paint ball gun or guns.  There were reportedly no injuries and neither candidate was on board. - Mark Williams

Oh, it’s just Republicans being shot at.  Go back to sleep.

Via:  JammieWearingFool via doubleplusundead

First, Instapundit gets an email:

“Off the record, every suspicion you have about MSM being in the tank for O is true.  We have a team of 4 people going thru dumpsters in Alaska and 4 in arizona.  Not a single one looking into Acorn, Ayers or Freddiemae.  Editor refuses to publish anything that would jeopardize election for O, and betting you dollars to donuts same is true at NYT, others.  People cheer when CNN or NBC run another Palin-mocking but raising any reasonable inquiry into Obama is derided or flat out ignored.  The fix is in, and its working.”

“It’s unbelievable here.  I’ve been through a few election cycles and have gotten pretty used to the open sneering every time a Republican candidate appears on the television, but this year is unlike anything I’ve ever seen.

“Anchors were openly cheering when the news came out that Sarah Palin’s daughter was pregnant.  Some of the comments were so over-the-top childish and nasty that I couldn’t believe what I was hearing.  They're obsessed with her.  They hate her even more than they hated Bush.  And they all talk openly about how “stupid” and “unqualified” she is...

“...The average person doesn't understand how obnoxiously left wing the average local newsroom staffer is.  The nightly newscasts they’re watching every night are being put together by producers who have nothing but disdain for the people watching.

“The irony is that these people are for the most part, some of the most ignorant, unimpressive individuals that you'll ever meet.  They know next to nothing.  They have no expertise in any area...

“ But they do think they’re both smarter than and superior to you.  Especially those of you who live in rural areas.”

In a world of disinformation, which is the future, brands are the solution.  Brand affinity is hard wired and fundamental to the human condition – who you trust and who you don’t.  People want real value, real information, real leadership and messages of hope.

What Schmidt is proposing... is a potential collusion between the major search engines and the “quality” purveyors of information — those who present the “correct” lessons in the “proper” narrative form in order to save us from the “cesspool of disinformation” that is likely to corrupt our opinions and direct us away from the golden road of progressive epistemology...

In other words, search engines will direct readers to the very kind of journalists who they’ve rejected in print, and, perforce, reinforce the hidden narrative biases that people have gone to the internet to escape.

...When asked where the industry ends up if there aren’t outlets willing to pay journalists to create quality content, Mr. Schmidt... [said[1]] that he didn’t have an answer but one thing to look at is whether journalism should be a for-profit enterprise.

Meaning: If the public won’t pay for the kind of “journalism” that meets Schmidt’s approval, they should be forced to subsidize it.  (And remember, a tax exemption is still a “tax expenditure!”)

Funny how progressivism always comes down to compulsion.

Related:  This discussion at BuzzMachine, in which journalists say, “It’s not our fault,” and reader after reader replies, “It’s your bias, stupid.”
-----
[1 ]  Irrelrelevant (except to the extent that it exposes the mindset of the reporter) political allusion excised.

There was a little lady, and she had a little gun
So-close-but-yet-so-far department:

How did Newsweek convince Gov. Sarah Palin to pose with a rifle for its cover? 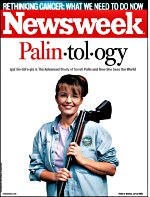 Instead, it used an archive (fancy speak for old) stock photo of her taken back in June 2002...

However, to the magazine’s credit, it did not try to hide the fact that it’s a stock photo...

So that makes it OK.

Right? Or maybe not? What do you think?

Hey, is that even the right way to hold a rifle? Can’t you shoot your foot off like that?

(Yeah, Ace has already linked this one, but I had to, too.)

Below the break, preserved for your amusement: The LAT’s comment thread!

-30-
It’s more than a little depressing to realize that I’ve been hanging around the web long enough to witness the revived New York Sun’s birth and demise.

A quick troll ’round my favorite newspaper-related sites found the death of The Sun curiously unremarked: Jarvis, Newsosaur, Gannett Blog, Don Surber, Stephen Waters, Jay Rosen... nothing. Well, perhaps everyone is preoccupied with their own concerns. (God knows, the media in general, and print media in particular, are having a terrible time of it.) Perhaps it’s because, with a paid circulation of only 40,000, The Sun was a relatively minor factor on the New York Media scene. Perhaps The Sun was doomed to fail; a dead man walking that (finally) fell over,

Or perhaps was the paper’s politics: By failing to be reliably left-wing, The Sun offended many of the chattering class, and drew hatred from the looney left (and the anti-Israel looney right):

Anonymous (not verified) says:October 01, 2008 11:33 AM
Great - another Zionist front goes down in flames. That they alligned themselves with right wing facist and racists says more about the moral aburdity of a movement which will take us all down unless we stop it.

I’ve not been a regular Sun reader (although I did link one of their stories yesterday), but from the impressions I’ve drawn and the reactions I’ve read, it appears that the paper’s backers set out to do “good” journalism, largely succeeded in doing so, and had fun doing it. Which, one would think, deserves celebration.  Not to mention respect and admiration for taking on the quixotic task of creating a newspaper from scratch in the 21st century.  Oh, well...

I find that I still have a bookmark set for Ira Stoll’s earlier Smarter Times.[1] I hope we’ll hear more from him – and the others who made The Sun what it was – in the future.


Elsewhere:
Daily Pundit: The Sun has set
Media Blog on NRO: The New York Sun stops the presses
Hit & Run: The end of The Sun
Columbia Journalism Review: So long, Sun
New York Observer: There goes The Sun
Related:
Reflections of a Newsosaur: It’s not the stupid economy, newspapers
-----
[1] At the moment that URL points to The Sun’s archived front page from St.Valentine’s Day of 2007.