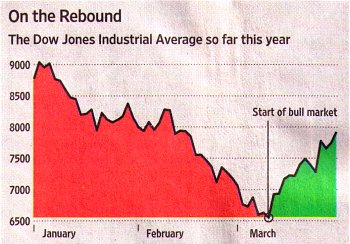 There is not a shread of justice in the hysteria that followed.  As AIG chief Ed Liddy explained on the Hill last week, the people receiving retention bonuses were not the same people who launched AIG’s unhedged housing bets...

All clear so far?

Not so fast.  In the next column down (“The ‘Populists’ Are Right About Wall Street”) Thomas Frank asks:

Why did the Treasury Department allow the payout of many millions in bonuses to executives of the unit that sank the company?

One would think that, after almost a month of sound and fury, hours of television time, thousands of column inches of newspaper coverage and a Congressional investigation, everyone  would know exactly which groups of AIG executives were on track for bonuses.  But there appears to be some confusion in the Journal’s opinion department.

Or perhaps not.  Frank very carefully says “executives of the same unit.”  What he does not say is “the same executives.”

Now I know the standards for opinion writing are (supposed to be) different from those of pure reporting.  If it’s opinion, personal disparagement, exaggeration, and loaded language are all part of the tools.  But when a writer shades the truth, or omits relevant facts just because they don’t agree with his position, this reader is going to call him out of bounds.  It’s like the witness who tells the court, “I didn’t hear anything,” but fails to mention that the reason he didn’t hear anything was because he was playing Grand Theft Auto with headphones on and the volume turned up.  In this case, Frank’s construction, while true (in the sense of “not false”), leads the reader to the (mistaken) conclusion that the people slated for the next round of bonuses are the same ones who killed the company.  Great for stoking populist fervor, but unfair to the audience, and not strictly true.[1]

A newspaper column shouldn’t have to be parsed like a contract.  Lawyer tricks with language only reduce the writer’s credibility.  And if those storied “multiple layers of editors” allow those tricks to make it into print, it’s the entire publication that suffers.

Two stories make a great house.  But when it comes to facts, “two stories” isn’t what I want from my newspaper.


UPDATE 090325 17:00:  So, Mr. Frank, was stoking the fires of populist fervor a good idea or not (especially since, thanks to the bailouts, “we” now own 80% of the company)?
-----
[1]  Not that there’s a lack of valid targets. Consider the newspaper industry, where Gannett Corporation just awarded $2 million in bonuses to CEO Craig Dubow and four other top executives,[2] despite widespread layoffs and furloughs (with more to come), a number of newspaper closures, and an 80+% fall in stock price.  But maybe that’s too close to home.

[3]  See, that’s how it’s done:  Tell the whole truth, mention any extenuating circumstances, and still leave the reader thinking it was a bad deal!

1 The only reason I'm writing this out is because I don't know how to spell a strangled "this is not helping my stress levels" noise. I did not need this news right now. Grrr.

2 You missed the e-mail from Jake DeSantis of AIG in the NYT Opinion Page, submitting his resignation to Liddy and questioning why he and his compatriots are being targeted when they had nothing to do with the demise of the company.

3 PS. I realize my last comment might be a little confusing; I was referring to the footnote about the Gannett bonuses. The rest of the post was fine.

For the past two years, several hundred left-leaning bloggers, political reporters, magazine writers, policy wonks and academics have talked stories and compared notes in an off-the-record online meeting space called JournoList.
...
...it’s hard to trace JList’s influence in the media, because so few JListers are willing to talk on the record about it.
...
One byproduct of that secrecy: For all its high-profile membership — which includes Nobel Prize-winning columnist Paul Krugman; staffers from Newsweek, POLITICO, Huffington Post, The New Republic, The Nation and The New Yorker; policy wonks, academics and bloggers such as Klein and Matthew Yglesias — JList itself has received almost no attention from the media.

You’d think that some public-spirited soul would have dumped the entire archive to Wikileaks by now.

Addressing the nation on his weekly television show on Sunday, the Venezuelan president laid out plans for his next crusade, ordering his governors and mayors to draw up a “map of the media war” to determine which media are “in the hands of the oligarchy.”

Chavez said that “if it weren't for the attack, the lies, manipulation and the exaggeration” of the private media networks, the Venezuelan government would have the support of at least 80 percent of the population.

Venezuela is more advanced democratically than we are?!

They often denounced “anti-Soviet lies.” These “lies” had never been reported by them.  Nor were they lies.  And their exposure was the first that readers had been told of them.  By reading the denunciation carefully, however, intelligent readers could decipher what the original story must have been.

In Today’s America, you find out what’s going on by noting what gets denounced in the establishment press.

-----
[1]  More newspaper stupidity (or, How Not to Maintain Your Authority):  This link, from 2004, is now dead.  The quote (found by Googling) is preserved at Florida Cracker.