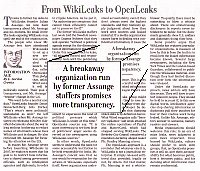 G’bye Don, too bad, sorry to see you go...
“We don’t want any web traffic”  Dept
Don Surber is one of the good guys who gets.frequent.linkage from Instapundit.  Too bad the owner of his paper has signed up with the Righthaven lawsuit factory.

Too bad I won’t be visiting any more.

Related:
Suing Your Readers for Spite and Profit
Previously:
Stephens Media additions for your HOSTS file.
(Via:  Sebastian, via Tam (and tnx for dept.).)

Below the break, the updated Righthaven-client blocklist.
more...

DMCA needs to be repealed.  That's just all there is to it.