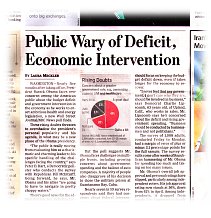 I recall in 2002-2004, during the “jobless recovery”, whenever claims filed would drop, that was treated as a bad thing by the MSM, because they decreed, ipse dixit, that that was because disspirited workers had just given up looking for work.

Ditto for the productivity index. An increase in that was spun as no big deal, since so few people are working, blah blah blah.

Now, not so much. Suddenly, this drop in claims is heralded as something good by the MSM.

So, I look at the L[os] A[ngeles] T[imes] site, and guess what their headline is:

Then, this paragraph was priceless:

But the employment figures, which the Labor Department reported this morning, offer hope that the worst of the economic downturn could be over: The number of lost jobs was the lowest since September, and it was only half of the average monthly job losses in the last half-year.

Geez, it’s almost as though the MSM is trying to spin bad news as good based upon who is in the White House.Ya think? 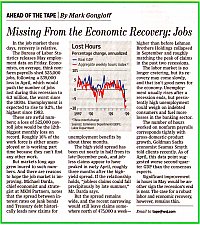 Economists, on the average, think nonfarm payrolls shed 525,000 jobs, following a 539,000 loss in April, which would push the number of jobs lost... to 6.3 million, the worst since the 1930s...
...
The labor market is no longer cratering, but its recovery may come slowly, and that isn’t good news for the economy...

Elsewhere:
The Rhetorican (via Ace):

The LAT discovers the Happy Unemployed...

Funny how stories like this one never surface during Republican administrations...