Over the weekend, I noticed Gannett being Gannett again...

But there’s no need to rely on me when Roberta

...sifting through over 900,000 gun permits (including mine!) in (at least) two counties to come up with 211 supposedly iffy permit grants, four (4) of which they deemed bad enough to address in detail, three of whom have already had their License To Carry Handgun revoked for cause.

and Tam (and, on a couple of.other issues, Advance Indiana) are around!

Bloggers: Reading the newspaper, so you don’t have to...

...For at least one question at the annual conference of the Society of Environmental Journalists (SEJ), [former Vice President Al] Gore was presented with an opportunity to address his critics and defend his views.  Unfortunately, as the video of the encounter shows, not only did Gore do what politicians usually do - evade the question - but his SEJ buddies made sure there would be no followup questions by turning off the microphone and forcing the questioner to leave.

In doing so, the SEJers demonstrated that they are the environmental beat’s equivalent of sports reporters who never say anything critical of the home team.  That’s why they are referred to by real sports journalists as “homers.”  The home team for SEJ is the environmental movement and its friends and allies in government who can do no wrong.

So, tell me again: Why are we supposed to believe anything these guys write?

Numbers, numbers...
This morning’s Indy Star has a front-page story covering the he-said she-said over the city’s animal control (a.k.a. “dog pound”) department.[1]

Two sidebars of statistics accompany the article.  The first: 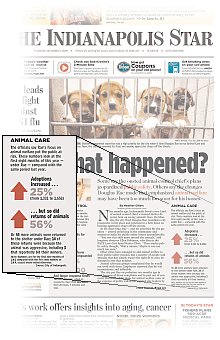 The officials say Rae's focus on animal welfare put the public at risk.  These numbers look at the first eight months of this year -- under Rae -- compared with the same period last year.

» 56% increase in returns of animals
» Or 44 more animals were returned to the shelter under Rae; 14 of those returns were because the animal was aggressive, including 3 that reportedly bit their owners.

As you can see from the image, the sidebars emphasized the percentages; the figures all came from the city.

The first sidebar appears relatively straightforward, but the second contains an interesting example of how the way a statistic - here, animals returned to the shelter - is presented can affect the reader’s reaction.  The 56% jump in the return rate sounds horrible (unsurprising for a number provided to bolster the mayor’s case against the fired director), but if we drill down a bit we discover that the “56% jump” represents 44 animals returned, out of 1,658 placed.  Figuring backward, that means last year’s returned number (for the same period) was 28.

IMO, a more reasonable metric would be one that measured placement success.  (Let’s call the successful ones “adoptions.”)  That is: What percentage of placements don’t work?  So grab the calculator, and...

’Sall in how you say it, innit?  And, were I reporting this story, I would hope that my spidey-sense would be acute enough to spot the slant in that oh-so-attractive 56% number.

(BTW, I got the Star image from Newseum.org’s Today’s Front Pages, which, disconcertingly enough, hosts a clearer front-page image than the Star’s own Indystar.com site.  Go figure.)

Are you listening Gannett?  The only reason we are still subscribing to your local rag is to give the cat a place to pee, and you can’t even do that job right.

-----
[1]  Long story short: Nine months after hiring an experienced shelter director who promised to shift the shelter’s emphasis toward adoption of unwanted animals, our mayor fired him (mostly on the stated grounds of “public safety”- not enough strays picked up) and replaced him with a lawyer.  Advance Indiana has some coverage here and here.