Don Surber has a post (which Glenn Reynolds linked) about a Milwaukee Journal-Sentinel article decrying the hazards of sledding without a helmet. The article includes a photo of a Waukesha, Wisconsin police officer using a radar gun to check the speeds of sledders in a county park,[1] and both Surber and Reynolds use that image as the starting point for painting pictures of mandatory-helmets-while-sledding laws and cops handing out “sledding too fast” tickets.

But, at least in this case, it looks like a false alarm. Turns out the J-S story is built around a “recent study” by something called the “Injury Free Coalition for Kids,” which

The officer was in the park at the request of the local children’s hospital, not on assignment by local authorities, and used his radar only to see how fast people were going, not to hand out tickets. (The hospital could have accomplished the same thing by borrowing a radar gun from the local baseball coach, but then the story wouldn't have been as photogenic!) Reporter Erin Richards localized things by including the tale of a Waukesha woman who suffered head injuries at age 20 when she sledded into a tree – at midnight,[2] some nice quotes on general sledding safety from the hospital’s injury prevention manager, and another quote from the spokeswoman for a local farm-and-fleet store which (surprise!) just happens to be stocking sledding helmets for the first time!

The article matches several of Drew Curtis’s qualifications for “fark,” i.e., “fake news:” It's based on a “new study” (journalism by press release), and someone is trying to sell something (publicity in place of advertising). It also matches the standard “seasonal template” (do winter-hazard stories in the wintertime) that too many newspapers use to fill space when they run out of ideas. And it ran on the Friday before Christmas, a day when newspapers are ad-fat and news is hard to come by.

But at least for the moment, nobody appears to be calling for new regulations, and thus the blogospherical kerfuffle is premature (although a good way to raise the reader’s blood pressure). The article, which probably would have been spiked on a day with a smaller news hole, is more of an “early warning,” than a “call to (re)action.” (So keep your powder dry.)

One good thing, though: In the process, Don Surber did come up with a great put-down, suitable for keeping in reserve:

The nannies in Wisconsin have uncovered the latest form of PHFWH – people having fun without helmets – sledding.

PHFWH! I'll have to remember to steal that one!


Later: Looks like I agree with Orin Kerr (who posted first).

-----
[1] How fast were they going? 10 - 17 miles per hour.
[2] Leading one commenter at Surber's site to speculate that there might possibly have been other recreational substances besides snow involved.

The payout worth 500 journalists ...or “what's your priority?”

Fitz’s handsome parting gift would be enough to pay some 543 reporters, copy editors or photographers at a big paper like the Chicago Tribune or Newsday, assuming average annual comp and benefits of $70,000 a year per newsperson.

I think it’s called “take the money and run.”

LATER: And speaking of “taking the money and running,” Fred Jacobs noted a bit of irony in a pair of stories that broke Tuesday:

So, on the one hand, the FCC passes the measure allowing media companies to own both a newspaper and a radio or television station in the same market. And on the other, Clear Channel brooms its entire staff in their Modern AC in Lancaster, CA and has replaced it with a simulcast of KIIS-FM/Los Angeles.

Hey buddy! Business model threatened? Why not...
Get the government to create special privileges for insiders, privileges denied to the hoi polloi:

2) COVERED PERSON- The term `covered person' means a person who regularly gathers, prepares, collects, photographs, records, writes, edits, reports, or publishes news or information that concerns local, national, or international events or other matters of public interest for dissemination to the public for a substantial portion of the person's livelihood or for substantial financial gain and includes a supervisor, employer, parent, subsidiary, or affiliate of such covered person. - HR-2021EH “The Free Flow of Information Act of 2007” as amended

By inserting a few words, the House changed a bill purported to extend the First Amendment into a monopoly protection act that establishes an exclusively privileged class of “paid journalists.”

I wonder who inserted those additions. I wonder about the sources of his/her campaign contributions. I wonder if it all might connect to this. Just wonderin'...

Tully at Stubborn Facts has been following this story: Molesting the First Amendment


Previously: Get the government to do your work for you.
Via: Lots of folks, but probably most recently Bill Quick.

Six weeks, six bogus stories
...all from Iraq and Afghanistan. Some were never corrected. All reflected poorly on the US and the US military. Gateway Pundit is keeping track.

A simple solution that will never happen
Kansas Attorney General resigns.
Guess which party he belongs to!
Updated

A simple style-book dictate stating that all politicians will have their party noted upon first mention, in the first paragraph, would largely cure the Guess That Party! syndrome...

So, why does the media not simply make a simple bright-line common-sense rule about this?

Because they don't want to. They want to continue omitting party affiliation in Democratic scandals and hyping it in Republican scandals. Without a simple rule, they can claim their choices are based on either "nuance" or "news judgment" or simple negligence. If they had such a rule, they'd have to apply it evenly, and they simply don't want to do that.

I know there's that rule about not confusing malevolence with stupidity, but there comes a time...

Previously: Well, this will certainly help their credibility 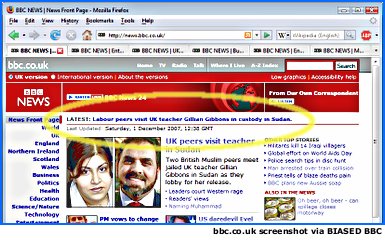 As you can see, the two peers (and there were only two) on the diplomatic mission seeking Gillian Gibbons release from Sudanese 'justice', are the Labour peer Lord Ahmed and the Conservative peer, Baroness Warsi, yet for some reason, our Beeboid friends natural assumption is that both are Labour peers. Why is that?

According to Biased BBC readers, the same mistake was made in reports on Radio 4 and Radio 5 Live on Saturday afternoon. Oops!