“Name That Party!” at the WSJ

Oklahoma Attorney General Drew Edmonson recently told supporters that he plans to run for Governor in 2010.  So voters might be interested in how the AG has treated critics of government...

So begins the editorial “Still Oklahoma’s Most Wanted” on the editorial page of today’s Wall Street Journal.  Seems that Mr. Edmondson doesn’t approve 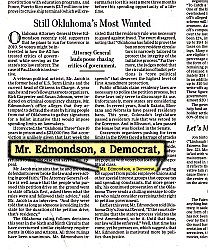 of “outsiders” engaging in political speech in his state, and is persuing criminal conspiracy charges against three “grassroots activists”[1] for “attempting to defraud the state by hiring people from out[side] of Oklahoma to gather signatures for a ballot initiative...” despite being unanimously overturned by the Tenth Circuit.

The editorial goes on to examine the history and circumstances of the Oklahoma case, the issue of residency requirements vs. freedom of speech in general, and the fate of similar legislation in the courts.[2] Altogether, a generally through job.

Except for one minor thing.  Only when we get to the eighth of the editorial’s nine paragraphs do we find out that Mr. Edmonson is – taa daa! –

Gee, you’d think that, of all people, the Journal editors would be alert for this stuff by now.


Previously.
-----
[1]  The Journal’s language.  Wonder what the Journal editors would have called them if the initiative had been for something other than to “impose spending limits on lawmakers?”  “Community organizers,” perhaps...?  Oh, snap!

[2]  Ohio and Arizona, overturned unanimously in the Sixth and Ninth Circuits respectively.

The story continues.  And don’t mess with N’awlins, heah?

1 Trib also owns WXIN and WTTV locally, and quite a few other stations.

"Interesting times."  It frets me.

Remember this when they come asking for bailouts
Paul Oberjuerge:

The biggest problem for American newspapers is this: It isn’t that they all are unprofitable, because even now most of them are. It’s that they are not profitable enough...

People go nuts when Exxon or other oil companies report billions of dollars of profit. But that profit almost always is 10 percent or under. The profit itself is huge because the numbers are so big.

Gannett papers worked on smaller scales, but the percentage of what was taken out of each of its communities and sent off to Arlington (and, later, Reston) was staggering. Not even the oil companies expect, ever, 40 percent profit.

Links Via:  Fading to Black

Some encouraging words might be appropriate
New friend Joanna has been caught in the newspaper layoff mixmaster.

1 Thanks for the kind words. It's really appreciated. I would have said so earlier, but I didn't have the heart to blog until today.