Skip the newscasts, here’s the narrative
Ace tells you all you need to know about how the media is spinning the Obama-Wright kerfuffle:

Meanwhile, in an alternate universe, Adolf Hitler is “distancing” himself from Josef Goebbels, telling the German media that despite Goebbels’ long-time position as Minister of Propaganda, the anti-semitic Goebbels “habt sprechen fur mich nicht” and that he no longer wants any questions about Goebbels’ loose talk about a “Final Solution.˜

Now you can skip the news and watch baseball.

I’ve been watching some of the anchors and pundits talking about this and half the time it’s like watching SNL.  Because they cannot possibly be serious with some of the sh*t they are saying, such as Obama has done the honorable thing and it’s time to move on from this “distraction”.  LOL.

First they respect you.  Then they suspect you.  Next, they’re upset with you.  Finally, they laugh at you.  And at that point, you’ve lost.

Just like those Muhammad cartoons...
“Covering” the story without actually telling it:

I mentioned on March 18, when the Wright affair was first in the news, that the [New York] Times had not reported the “God damn America” quote in its news sections.  (The only time it had appeared in the paper at that point was in a Bill Kristol column.)  Then, on March 26, I pointed it out again, although by that time it had also been mentioned in a Maureen Dowd column.  Now, I should say that it has been mentioned again in the paper — over the weekend, in an editorial condemning the North Carolina Republican Party for its Wright ad...  OK, that's three mentions on the editorial page.  But the news pages of the Times still have a clean record — they have never reported Wright's original “God damn America” quote.

So what do they do today? - Byron York at The Corner [links in original - o.g.]

The Atlantic’s photo editors show their feelings - the McCain Photo above the story has this name:
http://thecurrent.theatlantic.com/McCain loser.jpg. 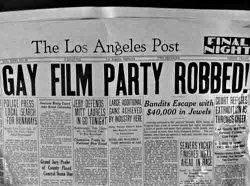 ...look at all that copy. Eight stories[1] above the fold.  Why can't we do that today?


----------
[1] Actually, probably more than eight.  The “Post” has an eight-column layout (you can tell because the masthead should be centered on the page).  We don’t see the gutter column (on the left). 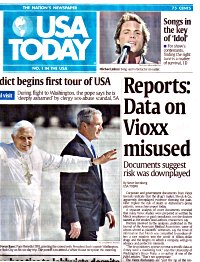 Corporate and government documents from Vioxx lawsuits indicate that the drug’s maker, Merck & Co., apparently downplayed evidence showing the painkiller tripled the risk of death in Alzheimer’s-prone patients, researchers report today.
...
(para #3): Doctors involved in the analyses, published in The Journal of the American Medical Association, some of whom serve as plantiffs’ witnesses, say... 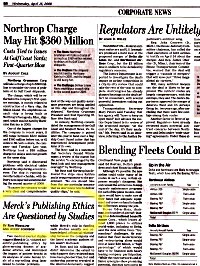 Two medical-journal studies suggest Merck & Co. violated scientific-publishing ethics by ghostwriting dozens of academic articles, and minimized the impact of patient deaths in its analyses of some human trials of a top-selling drug later linked to cardiac problems.
...
(para #4): The studies appear in Wednesday’s issue of the Journal of the American Medical Association. Five of the papers’ six authors served as paid consultants to plantiffs’ lawyers in Vioxx lawsuits...

O.G.’s comments:
• Note the weasel words in the USA Today story: Documents “indicate” that Merck “apparently” downplayed evidence. Is there any fire here, or is it all smoke?
• And speaking of appearance of impropriety, USA Today– in this day, when cigarette companies can’t be trusted to fund cancer research, and when environmental studies paid for by chemical companies are suspect, shouldn’t the fact that the majority of these studies’ authors derived income from the plantiffs’ bar as consultants against Merck be of interest to your readers?

Sounds like somebody with an agenda. Should we take this to mean that in the future the Journal of the American Medical Association is to be deemed as trustworthy as The Lancet?