HEAD: Jewish Man Dies as Rocks Pelt His Car in East Jerusalem
[ED: ‘‘As rocks pelt his car’’?  How exactly did the rocks go about doing this... get up off the ground and hurl themselves..?]
...
COPY:  A Jewish man died [ED: ‘‘was killed.’’] early Monday morning after attackers pelted the road [ED: ‘‘pelted the road’’?  They were aiming at the pavement?  Please clarify.] he was driving on with rocks as he was returning home from a dinner celebrating Rosh Hashana...

from Skeptical Thinker’s comment:
In the left-wing Hebrew press, the distinction in even greater than in English, because ‘‘progressive’’ writers don’t even use the passive voice, which at least implies somebody threw the rocks or fired the shots.  Whenever possible, they use the ‘‘middle’’ voice (as in Greek), which implies no such actor.  For example, they prefer avanim hit’offefu (literally, ‘‘rocks flung themselves in the air’’) to avanim niz’reku (‘‘rocks were thrown’’).

1 What an amazing informative post . One of my friend shared this link with me and I have subscribed this website essaywritingserviceuk.co.uk review . Thank you so much.

2 I agree with you on this matter. Progressive writers tend to use the middle voice.  Jon |  www.wildthingzllc.com

3 These day get the right information from anywhere, so you provide good information and smartech cables which is manufacturer company for ca6a plenum, cat5e plenum, cat6 plenum network cables appreciating you.

4 Hey, not to be that guy, but the coal industry is rapidly fading away, automation is really to take away jobs in the next 15-20 years. There are already trucks that do runs autonomously.
Chris Houston Photo Booth Rental

8 Its all Greek to me! Puppy Training

10 Allassignmenthelp.com is a well known company in do my homework website. Their services come at a very affordable rate, their homework are always written by experts and they are always on time. essay assignment help in Vancouver | Pay someone to write my assignment for me | assignment writing

12 This is passive related information but it is incomplete and many readers have complain about it because they can't understand and I will suggest that you should share detailed content, so that every reader can understand about your content.

13 I didn’t know about it!
https://dentistlifestyle.com/how-to-become-a-dentist-and-start-your-own-practice/

No one should be the *least* surprised
Fixed It For You  Dept
Ace:

If the [New York] Times is found to have deliberately lied to cover up liberal bias -- this is going to be huge. Z-z-z-z-z-z-z.

Getting the Lies Out (Three at Once! One! Two! Three!)
‘‘Corrections’’ Don’t Matter  Dept
National Review:

The N[ational] R[ifle] A[ssociation] Convention starts today, in Nashville, Tennessee.  And so, rather predictably, the New York Times has started its day by lying about it...

As I noted when the New York Daily News peddled this same falsehood earlier in the week...

UPDATE:  MSNBC tried this game, too, but ended up lost in a maze of corrections.

Gee.  You don’t suppose it was coordinated or anything...?

Getting the Lies Out (the series continues!)
‘‘Corrections’’ Don’t Matter  Dept
Erick Erickson:

Bloomberg ran a story that Nancy Reagan was endorsing Hillary Clinton.  It was a fake story that Bloomberg picked up without hesitating and ran.

It had to yank the story and apologize.

Who the hell would even believe a story like that?  The Media.  Just like liberal reporters immediately believed Sen. Rand Paul (R-KY) stormed out of an interview and turned out the lights — another story that was not true in any way, shape, or form — the press believed this because they want to believe.

...or because they’re Democratic operatives with bylines?

On April 4, [2015,]The Economist mocked the NRA and Second Amendment supporters with a column that turned out to be an epic fail because it was built on numbers from a debunked Everytown for Gun Safety study, an erroneous claim that ‘‘armor piercing’’ M855 ammo endangers police, and a not-so-veiled attempt to undercut the push to arm women for self-defense on college campuses.

While The Economist’s editors may not read Instapundit (although they’d be better off if they did so), one might expect them to keep track of the Washington Post.  Or is that asking too much..?

The difference between Reporting and Punditry - ii
You’ll Be Part Of the Story!  Dept
Glenn Reynolds:

I don’t mind the journos who circle around tragedies so much.  I mind the ones who — as with Ferguson, the UVA rape hoax, or the Indiana pizza parlor — actively incite tragedies for political and pecuniary gain.  With Ferguson, the purveyors of the ‘‘hands up, don’t shoot’’ lie were perhaps too numerous to call to account, though someone should try.  But with UVA it was Sabrina Rubin Erdely and Rolling Stone, and with the Indiana Pizzeria it was Alyssa Marino and ABC57 News, all of whom are identifiable defendants…

Reporters report the news.  Pundits (or propagandists) make (up) the news.

Journalists == Pundits/Propagandists.  Notice that's what all the youngsters in the business want to be known as -- journalists.

Nobody can be bothered to actually do real reporting anymore.

The difference between Reporting and Punditry
Fundamental Principles  Dept
Tweet quoted at Ace:

I'm still scratching my head.  Why does this pizza place need $25,000?  And [why is] the fundraiser is being done by a news enterprise?
— Alix Bryan (@alixbryan) April 2, 2015
Perhaps because something that’s called The Dana Show: The Conservative Alternative isn’t exactly a ‘‘news enterprise,’’ hmmm???

(At least no more than Chris Matthews or Rachel Maddow?  (Oh Snap!))

But then today’s journalists seem to have a lot of problems distinguishing reporting from punditry.


Explains a lot, doesn’t it?

SDB: A Crisis of Faith
My karma ran over my dogma  Dept


The lethal attack on Charlie Hebdo, and the firebombing of a tabloid in Germany, has brought out a major contradiction in the Religion of the Press, and a lot of members of the press are demonstrating their confusion in how they respond.


Exit Wounds: On Condemning Charlie Hebdo After The Attacks

...a minority [of those commenting on the Charlie murders] have made it clear that whilst they also condemn the murders, their condemnation is qualified, usually in the form "They didn’t deserve to be killed, but…”.  The ‘but’ refers to their disgust at Charlie Hebdo’s cartoons, and necessarily following from that, disgust that people are supporting or praising the paper...  For this minority, the attack on freedom of speech by violent Islamists is a trivial concern – the priority is instead criticising Charlie Hebdo for their sense of humour.  This is an attempt to shift the focus of the discussion away from the murdered journalists and police officers and towards the sensibilities of this minority and their taste in cartoons.

They *won’t* handle the truth
‘‘What Elephant?’’  Dept

Oh look!  There goes one now! 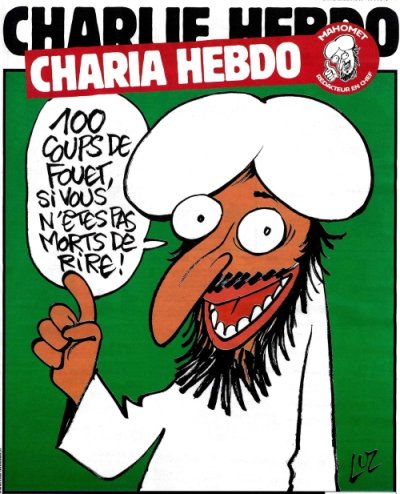