“Availablilty model” for online advertising is a bad idea
Buried in a New York Times article about that company’s plans to survive the recession is this:

Like most publishers, the Times Company is not able to sell all of the potential ad space on its Web sites.   It turns much of the remainder over to ad networks, which sell it at a small fraction of the original price.

...Industry executives say that online space — which a major newspaper could sell to an advertiser for $10 or more for every thousand readers seeing it — often yields the paper less than $1 when sold through a network.

Across the Internet, “we have a glut of unsold inventory every single day,” said Kelly Twohig, the digital activation director at Starcom, which buys media for clients like Kellogg’s and Nintendo.  She said that could force major sites... to cut back the online ad space they offer, to keep prices up.

“It’s about understanding, really, the efficacy of ads, and understanding how clutter hurts and lack of clutter helps from a branding perspective,” she said.

In print, newspapers adjust for advertising that is “not sold” by reducing the page count.  The size of the paper varies from day to day, but the ratio of news to advertising remains (relatively) constant.  Since newspapers don’t have to fill pages that they aren’t going to print, last-minute bargains in ad space are rare.

But the idea of online advertising as “inventory” to be “sold” is an important change.  Companies that look at their online ads in this way are adopting an “airline” or “radio and television” model.  For newspapers, it’s a model that gives them no advantage while running a big risk of irreversably cheapening their product.


Selling the seats...
Airlines do have an inventory, and we all know the drill on airline ticket prices: Get big bucks from the people who require certainty in their travel, offer discounts to anyone whose schedule is more flexible, sell whatever is left at a bottom-of-the-barrel price to whoever walks up at the last minute.  But if you can, get something; because once the plane takes off any unsold seats are worth zero.

Broadcasting works more or less the same way, with network television falling closest to the airline model.[1]   Commercial positions (called “availabilities”) are set months in advance, and, once set, changing them is practically impossible.   (The producers of 24 don’t send Fox extra unused footage for splicing back into this week’s episode, should some advertiser suddenly drop out.)   If you’ve ever been involved in buying television, you know that it’s not uncommon to get a Friday-afternoon call from the  salesman offering some great weekend position at a tremendous discount from its “normal” price.  The reason: Something happened, and the commercial that was supposed to run at that time, won’t.[2]

...before they become valueless.
The availability model makes a lot of sense for broadcasters: The spot position will take place, and (unless the plan is to make the audience sit through 30 seconds of bars and tone)[4] something has to fill it.  But the need  to fill the slot has a side effect: The cost to the advertiser can fall– in extreme cases to practically nothing.  And this diminishes the perceived value of broadcast advertising in general.

But the internet isn’t radio or television.  While the web is “infinitely extensible,” it doesn’t have to be.  Specifically, a newspaper’s website doesn’t have to contain any particular number of ads, any more than the print edition has to have a particular number of pages.  So why on earth are newspapers, already concerned by the lower per-ad revenues generated by web advertising, moving toward a model that tends to devalue online even more?

Filling the holes...
I believe a major reason is what I call the “template-i-fication” 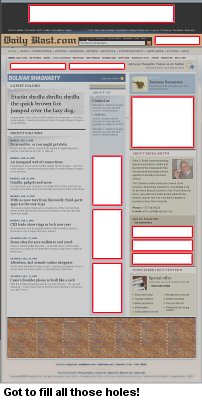 of most newspapers’ online sites.  For the print edition, each days’ interleaving of news and advertising is a custom product.   Contrast that to the typical online content-management system which takes headlines, stories, and advertising, and plugs all of them into standard, relatively inflexible, layouts.   Those standardized layouts are built with “holes” in them, holes that reflect somebody’s best guesstimate of the advertising the paper’s typical web page would carry on any typical day.[5]

But no day is typical.

Which means that on most days there will be holes that have to be filled.  And that encourages discounting.

“Ads are cheap” = “We need a lot of them.”
Those widespread discounts have another, insidious, consequence:  They encourage people on both sides of the sale to believe that online ads really aren’t worth very much.  For the salesman, that attitude makes it difficult to hold out for the full price.  For the advertiser, it sets an expectation of cheap prices, with discounts piled on top.[6]   And for the paper itself, it leads to the thinking,  “Ads are cheap, therefore we need a lot of them.”

Take another look at that template:  There are eleven ad positions on that page.[7]  Now grab this morning’s newspaper:  How many pages (other than classified) have eleven ads?

All the clutter makes the webpage hard for the reader to “parse.”  It also increases loading/rendering times.  Neither of which makes for a good reader experience.
“We need a lot of them” = “We’ll take anything we can get”
And what kind of cheap ads are newspapers getting?   Does your paper run prominent ads for colonic irrigation, sexuality quizzes, or weight loss pills on page 2?   Today my local paper’s website had two of these[8]– one click away from its home page.  From a branding perspective, this makes me wince:  Both ads came in on a network, which means they were probably some of those $1/thousand-impression cheapies mentioned in the Times article.  I would bet that the harm they did to the paper’s image far outweighed any revenue they produced.  The readers wonder, “How desperate are they, running  ads like that?”  while advertisers ask, “Do I want my ad appearing next to this stuff?”   Is that kind of damage worth $100?  How about $50?

Start by believing in your product.
What’s tragic is that online advertising should be worth more to the advertiser, not less.  That doesn’t mean that the advertiser should pay more; he might well wind up spending less for fewer impressions, while getting better results (thanks to contextual targeting and IP address parsing– you do offer these as “standard equipment,” right?).  Online advertising should be the answer to an advertiser’s prayer (because he no longer has to pay for what doesn’t work).  At the same time, the prospect of selling the “same space,” over and over, to different buyers ought to delight any newspaper’s ad manager.

So newspapers should believe in their product.  They should clear the “garbage” from their webpages, and refuse to accept marginal advertising that pays only a pittance for damaging their brand.  They should demand that their webmasters produce dynamic designs, with built-in targeting capability that lets their advertisers zero in on likely prospects.  And then they should charge accordingly.

But first of all, they must abandon the idea of a fixed ad count, and the mindset that says that online advertising is junk, junk which can only be given away to the lowest bidder.

Via:  Gannett Blog
-----
[1]  In olden days, radio used to be more flexible.  The rise in syndicated programming, and investor pressure to maximize spot count have both reduced this.  Where before unsold positions would often go silently by (“just tell the DJ to play another song”), nowadays you get five-minute blocks of announcements, of which less than half are actually paid for.[3]

[2] Note: If you ever see one of those “produced by the Ad Council” spots running in the middle of prime time, you can bet there was a crash-and-burn situation with either the network or the local station unable find a commercial buyer for that position, and therefore being reduced to giving it away in exchange for FCC “public service” brownie points.[3]

[3]  Commercial stations have a “public service” requirement as part of their license. A portion of this requirement can be met by “giving away” commercial time to Recognized Worthy Causes.  Most stations deal with the rest by creating an early-Sunday-morning feature (broadcast between late-Satuday-night’s final “paid programming” extravaganza and Sunday morning’s first “paid religion” show) in which assorted neighborhood loudmouths are given a chance to bloviate on various “issues of local importance.”

[5]  It doesn’t have to be like this.  A good web designer can build pages using dynamic templates; templates which can assure uniformity of style while changing depending on the day’s ad count and story length.  The fact that so many papers are stuck with static layouts is yet another example of most managements’ cluelessness when it comes to the web.

[6]  Radio has the same problem:  Stations publish rate cards, but, like sticker prices on new cars, the published rates are only for suckers.

[7]  Not a particularly severe example.   Take a look at your typical television station home page!