Pro-jec-tion! (duh-dum dum) Projection! Maybe the reason they're so eager to impute hatred to everybody else is because it occupies such a major part in their own lives. 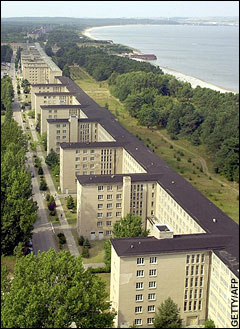 First built for the master race as part of the Nazi "Strength Through Joy" programme, the hulking dormitories of Prora, stretching over three miles of pristine Baltic coast, were intended to house 20,000 people at a time...

Eight housing blocks were built by the time Hitler invaded Poland in 1939, but the grandiose plans for a huge banqueting hall and twin swimming pools with wave machines were never completed. -- The Telegraph [bolding mine - o.g.]

Now the German Youth Hostel Association hope to restore and use it for environmentally-conscious holidaying.

Many examples of grandiose Nazi architecture were either destroyed or subsequently modified into unrecognizability. The scale of this site, which remains much as it was in 1939, is a reminder of just how formidable, and megalomaniac, Nazi Germany was.
-----
LATER:  Historic and contemporary photos and drawings of the Prora resort at Geoff Walden's site.

If you were the judge, how would you rule?  Easy, huh?

Wrong:  It's in California.

Yah know, if you start something, you really should follow through Must have seemed like a good idea at the time: Ask a bunch of editorial cartoonists to submit cartoons that had been spiked by their editors. Put 'em all in a book. Make a point about editorial cowardice. Take the high moral ground. But...

When you publish a book called Killed Cartoons: Casualties from the War on Free Expression, the whole point would seem to be that you're speaking up for unfettered satire. Apparently not. The publishers of Killed Cartoons ... killed one of the cartoons!
-- Joe Bob Briggs

Any guesses about the subject of the cartoon that got killed?   It was a cartoon drawn for the Tallahassee Democrat by the late Doug Marlette.  Spiked by the Democrat's editor in 2002, and again by W.W. Norton (the publisher) when the book was being assembled, it was captioned: "What Would Mohammed Drive?" See it here.
-----
HT Tim Blair, who invokes the New York Times and the Sydney Morning Herald.

Who said: "Who hasn't felt like doing that?"
Answer:  A member of the German police, who'd been investigating a report of a Hanover man hurling a computer out the window of his upper-story apartment.  Tale here.

Back-door gun control deferred They got caught, and now they're back-pedalling:

Gun owners had filed a blizzard of negative comments urged by the NRA, and just a week ago, OSHA had already issued one extension for its public comment period at the request of the National Shooting Sports Foundation. After continued publicity through NRA alerts and the outdoor media, and after dozens of Members of Congress expressed concern about its impact, OSHA has wisely decided to go back to the drawing board. -- NRA-ILA site

Sony goes for the Louis Renault award They're shocked, shocked to find that they were selling CDs that included rootkit software!

Sony BMG Music Entertainment is suing a company that developed antipiracy software for CDs, claiming the technology was defective and cost the record company millions of dollars to settle consumer complaints and government investigations. Sony BMG filed a summons in a New York state court against The Amergence Group Inc., formerly SunnComm International, which developed the MediaMax CD copy-protection technology. ... [Sony BMG] began including MediaMax on some of its compact discs in August 2003 and shipped about 4 million CDs equipped with the technology in 2005. ...
The fallout over the copy-protected CDs sparked lawsuits and investigations. Last fall, [Sony BMG] agreed to pay a total of $5.75 million to settle the litigation and resolve investigations by officials in several states.
-- Hollywood Reporter

Interesting how the loss of a few million dollars can change attitudes.
----
Via Slashdot.

On May 30, 15 LOTR actors from New Zealand filed a complaint in Los Angeles Superior Court, stating New Line hasn’t made good on its promise to pay the thesps 5 percent of the net revenue from the sales of merchandise bearing their characters’ likenesses.

But after reportedly reaping $100 million in merchandising revenue, New Line has yet to pay the 15 actors a penny from that revenue.
-- Backstage.com, July 6

The WSJ notices something Scan of pullquote in the op-ed "What About Muslim Moderates" (R. James Woolsey and Nina Shea) in Tuesday's [July 10th] Wall Street Journal: 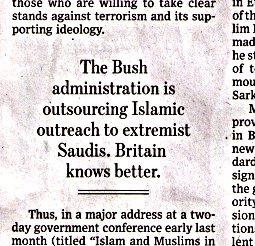 I don't recall seeing the words "extremist" and "Saudis" in this close proximity in any MSM article since 9/11, let alone in a pullquote.

Do you suppose it's possible that somebody is finally noticing?

What eleven months of love will do

He's available for adoption, too. Anybody live near Spencer, NY and have room for a(nother) cat?
more...