The mob moves in
Now that the government has fixed it so the numbers we get from its own departments are thoroughly cooked, it’s time to deal with the ones coming from the private sector.

The Securities and Exchange Commission (SEC) has notified Standard & Poor’s that civil charges may be filed against the credit-ratings firm for its 2007 grading of a high-risk securities deal.

This is just Chicago Way style payback for S&P daring to downgrade the US thanks to Barry Obama’s socialist spending spree.

Wishes for a new, good year
To all my Jewish friends (even especially the ones who drive me crazy!).

Meryl Yourish:  A sweet and happy New Year
Jeff Dunetz:  I Always Walked To Shul with My Father
Rahel:  Plants of the Season

Hopefully I fall into the non-driving-crazy contingent

2 Nah, those are the ones who complain about America's treatment of Israel but say they have to keep voting Democrat because they're afraid of the Christianists.

3 Eh.  Nothing changes with most of my co-religionists.  They'll let the nice Islamic terrorist sneak up on them while they're busy keeping an eye on those evil Christians.

Bride of “Why government costs so much”
This Time For Sure!  Dept

...The Energy Department has approved two loan guarantees worth more than $1billion for solar energy projects in Nevada and Arizona..., under the same program that paid for a $535 million loan to Solyndra Inc., a now-bankrupt solar panel maker...

What could possibly go wrong?

Of that $1 billion in guarantees, $737 million went to "Tonopah Solar,” a subsidiary of a California-based company named SolarReserve.  Which has an "investment partner” called PCG.  Whose number-two man just happens to be Nancy Pelosi’s brother-in-law.

(Update rewritten from this report by Jim Hoft, via American Glob via the invaluable AOS sidebar.)

By his “friends” you shall know him
New York Post:

Dimon, a lifelong Democrat who was rumored to be on Obama’s short list for treasury secretary before he settled on Tim Geithner, met privately with Romney on Tuesday morning before a fund-raiser at Brasserie 8¹/2 hosted by Highbridge Capital, a JPMorgan-owned hedge fund.

Unsurprising.  After all, the well-being of "lifelong Democrats” and their too-big-to-fail crony corporations is always an important concern for the RINO Republicans.  If Romney wasn’t one of them, he’d have had enough sense to not get caught anywhere near that crowd.

Trial balloon?
North Carolina Governor Bev Perdue says the times are too grave for us to indulge in that "election” stuff:

You have to have more ability from Congress, I think, to work together and to get over the partisan bickering and focus on fixing things.  I think we ought to suspend, perhaps, elections for Congress for two years and just tell them we won't hold it against them, whatever decisions they make, to just let them help this country recover.  I really hope that someone can agree with me on that.

Spokesman Chris Mackey later said the governor was "...obviously using hyperbole to highlight what we can all agree is a serious problem...” (well, what else would he say?), but witnesses report "her tone was level and she asked others to support her on the idea.”  Anybody have a recording?  (UPDATE: Jeff does!)

Every day in every way, Glenn Beck sounds less crazy.  Which is not necessarily a Good Thing.

Sister Toldjah:  Gov. Perdue’s office says her suggestion to suspend Cong. elections was only "hypberbole”
Daily Pundit:  Okay, you all see Drudge; I get that. But still…
Gateway Pundit:  It Begins – Lib Governor Calls For Suspending 2012 Elections

I guess if the Left can't get what it wants with elections, it's perfectly happy to suppress the electorate.  And the Left knows damn well it won't hold the Senate after 2012.

Connection? What connection?
From today’s Ace Of Spades sidebar: 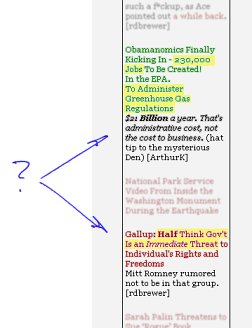 For centuries, a bedrock principle of criminal law as held that people must know they are doing something wrong before they can be found guilty...

In recent decades, Congress has repeadedly crafted laws that weaken or disregard the notion of criminal intent...

For large numbers of voters the professional classes who staff the bureaucracies, foundations and policy institutes in and around government are themselves a special interest.  It is not that evil plutocrats control innocent bureaucrats; many voters believe that the progressive administrative class is a social order that has its own special interests...

The problem goes even deeper than hostility toward perceived featherbedding and life tenure for government workers.  The professionals and administrators who make up the progressive state are seen as a hostile power with an agenda of their own that they seek to impose on the nation.

Son of “Why government costs so much”
Associated Press:

The federal government has doled out more than $600 million in benefit payments to dead people over the past five years...

You may call it fraud.  Our politician friends probably call it "taking care of the constituency.”

1 The dead, in some precincts anyway, turn out in greater numbers than the living.  "Constituent service" is exactly what it is.

In a normal, free-market environment, of course, business executives take their cue from customers — not from the East Wing. [link added - O.G.]

But this is no normal, free-market environment.

And, I might add, Darden Restaurants is no normal restaurant chain.

At a time when most food service providers are struggling under the weight of increased taxes, health care mandates, and regulations, Darden Restaurants just happens to be one of the few and fortunate businesses to obtain one of those coveted Obamacare waivers.

As to whether Mr. Immelt expects any of that "growing” to include GE’s operations in the U.S... the article doesn’t say.

And guess how much of that $535 mill the taxpayers aren’t likely to recover:

...bankrupt Solyndra will retain Imperial Capital at the cost of $150,000 per month (this is cash that is immediately leaving the estate, thus minimizing recoveries to US taxpayers), a $1 million confirmation fee, a $1 million sale fee (the two are not exclusive), a 1%/3%/5% financing fee (i.e., Imperial arranges follow through financing, although good luck with that), and so on. In other news, should this bankruptcy stretch for more than the usual 1 year period from filing to emergence, US taxpayers will be on the hook for another roughly $3 million, in order to hire a banker whose ultimate value added will be an "orderly" liquidation of the company.

You know what they say: A million here, a million there, and sooner or later there’s no money left...

(Malkin via DP, Goldman via Glenn)

The Journal plays the race card
Tuesday’s Wall Street Journal headed up its "Review & Outlook” column with an editorial titled Republican Overregulation [no longer on web]. In their latest trip around the track aboard the paper’s pro-massive-immigration hobbyhorse, the Journal editors offered up this statement:

Republicans claim they oppose only illegal immigration but the truth is that many have grown hostile to all immigration.

Now although I don’t pretend to speak for all Republicans (or even "many” of them), 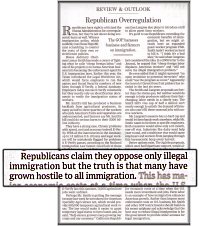 and although the only pets around my house are cats, I can still spot a dogwhistle when I see one.

While the editors didn’t continue, the tone of the piece leaves little doubt that "...hostile to all immigrants so shut up, you bunch of ra-a-a-a-cists!” was their intent here.

And (again) although I don’t pretend to speak for all Republicans (or even "many” of them), and although I remain without the editors’ insights concerning "the truth,” I can say that, at least as far as I and the Republicans who I know are concerned, the Journal is full of it.

And while at times I may seem weary of immigration altogether, that has a lot  to do with our political establishment’s (and its media enablers’) total lack of interest in doing anything to actually address the problems produced by the illegals and their presence in my country.

And isn’t it interesting... that when they don’t get what they want, the Gentry "Conservatives” sound so very much like the Gentry Liberals.