What the hell is it with Democrats and totalitarian iconography?  They don't even seem to care whether they steal from communists, fascists, or movie posters for 1984.

Easier to explain, though.

No. Next question?
‘‘You can’t park there!’’  Dept
Glenn Reynolds:

Are there any federal agencies that actually help the little guy?

...
Actually, I’d start with the USMC, but I don’t think those are the kind of ‘‘federal agencies’’ Glenn means.

In a 53-46 vote, the Senate narrowly passed a measure that will stop the United States from entering into the United Nations Arms Trade Treaty...  The...treaty, which has been championed by the Obama Administration, would have effectively placed a global ban on the import and export of small firearms.  The ban would have affected all private gun owners in the U.S. and had language that would have implemented an international gun registry... on all private guns and ammo.

Astonishingly, 46 out of our 100 United States Senators were willing to give away our Constitutional rights to a foreign power.

1 All progs and commies, I see.

The *possibility* of good intentions?
Assuming facts not in evidence  Dept
David Goldman:

Spengler:  Putin Isn’t a Genius — We Are Complete Idiots

Except ‘‘complete idiots’’ might be trying to protect American interests.

The Wall Street Journal:  The Voice of America Shouldn't Be A Whisper

In which John Lenczowski (founder, Institute of World Politics) just can’t understand why an American Government run by leftist progressive internationalists would cut back its foreign broadcast operations at a time of international crisis...

Just in case you still believed government exists to protect its citizens... Bloomberg.com:

The U.S. National Security Agency knew for at least two years about a flaw in the way that many websites send sensitive information, now dubbed the Heartbleed bug, and regularly used it to gather critical intelligence, two people familiar with the matter said.

threatens to renew the rancorous debate over the role of the government’s top computer experts.

The NSA has now said it knew nothing about the Heartbleed bug in a brief statement on Twitter.

Statement:  NSA was not aware of the recently identified Heartbleed vulnerability until it was made public.
— NSA/CSS (@NSA_PAO) April 11, 2014

Well, they would say that, wouldn’t they.

And just why should we believe them this time?


MORE: From the Register story comments:

...by April 7th a patch had been written and committed for 1.0.1e, heartbleed.com had been registered for 3 days, there had been considerable correspondence between the Finnish company and the authors.  Google had allegedly already patched it servers.

And the NSA had not known this?

Which leads to the conclusion they are incredibly incompetent or barefaced liars.  Your choice.

And if they lied about 2 days or 2 weeks how can one believe it wasn’t two years?

Right. Good luck with that!
Your Government Inaction  Dept

The bad behavior going on at the IRS – whether it is politically motivated or not – does not stop with Lerner.  It has to go higher than that.  How much higher, I do not know, but that’s yet another reason why we need an investigation – a real one.

Sorry, Chris, but the guys over at FedGov are too busy threatening citizens and stealing their stuff..

So why aren’t there more?
Spotted in the Ace Of Spades sidebar: 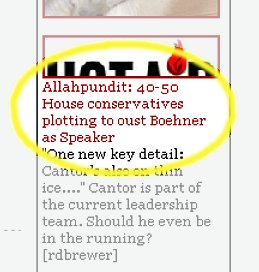 Why the ‘‘hypocrisy’’ argument fails against leftists...
Know The Enemy  Dept

Because they lie, and they know it:

The left never believed Obama REALLY in his heart was against gay marriage or, for another example, that he was a seriously observant and practicing Christian when he was running for President.  Rather they abided his saying these things for political expediency.  The left (both their candidates and their voters) know there are certain things they must do and say and pretend at if they are going to achieve their two-pronged goal, power and influence.

Democrat voters aren’t... being fooled or tricked.  They are partners in the deception.

Of course, telling lies to get elected isn’t only a sin of the left...