I believe it's called "put up, or shut up"
Beldar makes John Kerry an offer:

You have a standing offer from me: Just sue me here in Houston for defamation. After all, I've republished most of the SwiftVets' claims here on my blog, and I've made many of them again in my own voice. I use a pseudonym for my blog name, but it's not anonymous — my name and address are linked on every page of this blog, and have been since the day it started. I'll waive any statute of limitations defense. I'll waive service of process. Hell, I'll meet you at the federal courthouse doors for the Southern District of Texas, Houston Division (you have diversity jurisdiction), and I'll even pay your filing fee!

You think it will be too expensive to have big teams of lawyers? Fine — since you were once a big-time courtroom lawyer, let's just you and me tangle one-on-one, both of us pro se. (I'll agree not to oppose your application for admission pro hac vice to the federal court here in Texas, and I'll even pay the fees to get your law license reinstated in Massachusetts.) Just me at my table, you at yours, and then a set of jurors good and true in the jury box...

...and I'll bring the popcorn.

Half empty, half full
Don Surber:

But given Gannett's penchant for nannyism, it doesn't surprise me that their version led with the "bad" news. 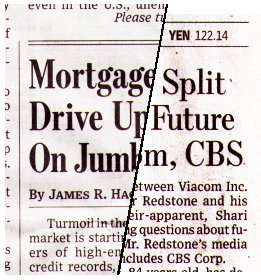 On the Right: Front page column 5 story from the Friday, July 20 issue ("Redstone Split Bears On Future Of Viacom, CBS")

Moments ago, we received another letter from the Canadian Human Rights Commission, dated August 1, 2007, informing us that Marie-Line Gentes has withdrawn her complaint against Free Dominion and requested that the CHRC take no further action against us.

I would like to thank Ms. Gentes for making this move and will assume her motives for doing so were honourable...

Also included was a cover letter asking us to take note of the fact that Investigative branch of the CHRC will be recommending that the Commission not proceed with this case.

So where is everybody?
A Washington Post story about the demographic balance of attendees at the Yearly Kos get-together has spread through the 'sphere, generating some right-side snarkage, and a serious question.

"It's mostly white. More male than female... It's not very diverse."

[The Post writer then proceeded to describe efforts by the organizers and others to increase "diversity" and "representation" at the conference, all the while carefully identifying the gender and ethnicity of every person mentioned.]

Then La Shawn Barber turned the Post's headline back to front:

YEARLYKOS: A "sea of middle-aged white males." Not that there's anything wrong with that!

The single most powerful voting bloc in the country is white males, and of those who vote, middle-aged and older make up the largest sub-group. If the Kossack version of progressivism is making strong inroads into that demographic, conservatives are faced with some real problems.

Good point, but IMHO there's no reason for Bill to worry.  In fact, this datum may be indicative of an encouraging change.
more...

A look at the tape
There's been a discussion of the Minneapolis bridge failure over at Steven Den Beste's. In the comment thread, "ubu" linked to his post at Houblog, in which he pointed out some signs of structural failure near the center of the span that appear early in the security camera video. [That last link not verified: I can't do video on this computer.]

In the interest of experimentation, I grabbed the two frames he posted, and overlayed them using The Gimp. The striking thing is that in the time between the first and second frames, the entire right section of the structure dropped what looks like about 10-15 feet. Here's an animation:

It's important to note what you're not seeing here: This is not a sequence of images. It is a "fade" from the first image ubu captured to the second one. Still, the effect is quite pronounced. From this, it appears to me that the buckling in the deck and the deformation of the arch (green arrows) are both results of whatever happened off-camera to the right, but, as ubu points out, failure at the center of the arch could have pushed the bridge's near "feet" off of their concrete piers. (Although the vertical members don't appear to move shoreward at all, they wouldn't have had to move very much.)

So we speculators are not a lot nearer the answer than before. Guess we'll have to await the verdict of the experts. Still, the image is interesting, and I thought I'd share it.
----
UPDATE and linkage 070803 16:37: Materials engineering glossary by "notfromaroundhere."  Hattip to commenter "FOH," who posted the link in this comment thread at buzz.mn.