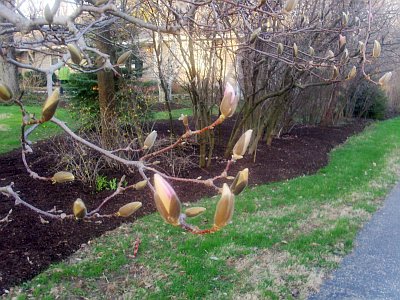 JUST SAW OBAMA’S SPEECH TO THE TROOPS AT BAGRAM:  One of his better performances, really.

...this weekend, he sounded like a commander-in-chief who understands the exceptional uniqueness of America.

Answer: Anyone who was paying attention
I’ll take “Things You Should Have Known Already” for $100 Dept
Paul Jackson (via IP):

Who could have foreseen that the president who follows Obama will have to hit the reset button…..with Great Britain and Israel!!!

Y’know, if everything you hear is “hate speech”...
...maybe it’s because everybody around you hates what you’ve done?

Related:
Hot, or Not?  (Which Peggy Noonan should have read before she wrote today’s column!)
Rush Limbaugh calls for understanding  (via Althouse)
dicentra:  What’s more dangerous: leaving an angry message on an answering machine or using every Big Microphone you can to depict 60% of the populace as a dangerous, angry mob?
But wait, there’s more! (added 100329)
John Hinderaker  recalls some hatred.
Mike Hendrix:  Had enough yet?

In the wake of the passage of health care reform, nearly the entire slate of Republican senatorial candidates seems ready to run on a repeal of the bill.  But now, the lawmaker overseeing their election strategy is softening the message. Rather than promising to scrap the bill in its entirety, the GOP will pledge to just get rid of the more controversial parts.

In a brief chat with the Huffington Post on Tuesday, National Republican Senatorial Committee chair John Cornyn (R-Tex.) implicitly acknowledged that Republicans are content with allowing some elements of Obama’s reform into law.  And they’d generally ignore those elements when taking the fight to their Democrat opponents as November approaches.

“There is non-controversial stuff here like the preexisting conditions exclusion and those sorts of things,” the Texas Republican said. “Now we are not interested in repealing that.  And that is frankly a distraction.”

Restoring liberty is “frankly a distraction,” huh?  C’mon you apologists, tell me again why I should vote Republican?

Via:  The Corner via Bill Quick, who noted:

And the dumbasses just can’t resist blabbing to the commies over at HuffnHos, either.

The sort of thing that can crop up unexpectedly...
...when you don’t check your.travel.route.in.advance.

(And it’s not as if this hasn’t happened before.  Or won’t happen again.)

No room for “enlightened Westerners” hubris
But that’s different!  Dept 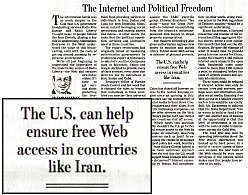 Which raises the question:  Why shouldn’t the U.S. go further and endure access to the Web by people in especially deserving countries such as Iran? - L. Gordon Crovitz

Emergence of the grass-roots “tea party” movement as a major force on the American political right is having a quiet but fundamental effect on the Republican tribe: Social conservatives have been voted off the island.

Yeah. Which has these guys so worried that there might  possibly be a small-l libertarian / SoCon split.  R-r-r-r-r-i-i-i-g-h-t!

And the Sunday papers aren’t even out yet!

I don’t think it’ll happen; I believe the social conservatives are smart enough to take half a loaf.

But should things go the other way, I tend to agree with Roberta:

...If things start to sort out into Those Who Would Run Your Life “For Your Own Good” (real scorn quote) and limited-gov’t people who figure morals are your own biz if you don’t harm others, I’ll be a happy camper.

And I know which I’ll vote for.

The failure of the Republicans to take advantage of the entertainment industries’ unpopularity during Bush’s first term was a colossal mistake.

No, Glenn, it just shows the Republicans were bought, too.

Best line about the Oscars that’s not about the Oscars
“I’m just happy NBC didn’t carry it because then it would have been tape-delayed for the West Coast.” - “former law student,” in a comment at Althouse