Snow fell as the House of Commons debated Global Warming yesterday - the first October fall in the metropolis since 1922.  The Mother of Parliaments was discussing the Mother of All Bills for the last time, in a marathon six hour session. - The Register

Unfortunately, there was no equivalent fallout of common sense.

The Bill finally passed its third reading by 463 votes to three.

Another bureaucrat who wants to change the world...
...whether he has the authority, or not.
From The Wall Street Journal:

His main mission, ...[Federal Election Commission Chairman Don McGahn] says in interviews and in his rulings, isn't to favor one party over another but to help strengthen both parties -- and to weaken the ideological outside voices that have played a growing role in shaping campaigns over the past four years.

Dear Mr. McGahn:
Just a friendly reminder.
Your “mission” is to enforce the law.
Anything more is overreach.
Cheers,
O.G.
And yeah, this guy is “a die-hard Republican.”

Thoroughly trivial Tuesday
First up, an exchange in the comments to this post (Linked by Insty™):

Actually, bloggers are to the mainstream media as nymphomaniacs are to hookers.

More enthusiastic, more interested, generally better, and they give it away!
Posted by: Parker at October 27, 2008 8:34 PM

And then, no thanks to C.G. Hill, a post (by Jennifer) which commences thusly:

Tentacles far, and tentacles near...      I command all tentacles disappear!
- Harold Shea
...or was that PENtacles? 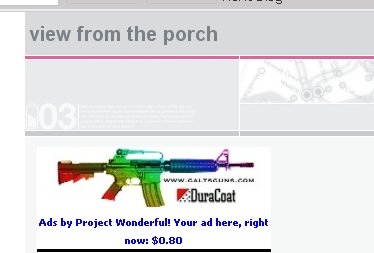 Pennsylvania turns out the lights
If I worked in our governor’s office, I’d be dispatching a bunch of business-relocation specialists to Pennsylvania right now:

Pennsylvania has begun a major effort to cut electricity use, requiring the state's 11 utilities to not only stop power usage from rising, but to cut it starting in 2011.

Legislation that Gov. Ed Rendell [who happens to be a Democrat - o.g.] signed Wednesday requires the utilities to cut annual electricity usage by at least 1 percent by May 31, 2011, based on usage estimates made by state regulators, who can take into account a major anomaly, such as an unusually hot summer or a substantial surge in demand from a new user, such as a factory.

To ensure that utilities take the task seriously, the new law allows up to $20 million in penalties for failure to meet the benchmarks for electricity usage cuts...

By May 31, 2013, utilities have to cut usage by at least 3 percent, as well as slash 4.5 percent from electricity usage during the 100 highest-use hours of the year.

Well, look on the bright side: The last person out of PA won’t have to turn out the lights – they’ll already be out.

Via: Billy Beck via TheIrritableArchitect, who notes:

I am currently putting wraps on a facility in central Pennsylvania, a manufacturing plant, of over 1,000,000 square feet.  There is an area for incoming raw material storage, the processing area, then another finished storage warehouse, and an administrative office, all under one roof.  The project was supposed to be phasing in a second building, of approximately the same size, after this first one got online.

A few weeks ago, we received word that the next phase is on hold.  I now have at least some indication as to why.

Why?  Because this one building requires 2,500 kVA feed, that's why, and the fucking chiselers in the Penn.gov think it's A-OK to arbitrarily tell producers and consumers what they can do and what, and how much, they can consume.

I hope the assholes in the Keystone State enjoy watching their economy degrade even further.

Amen. Although there’s a good chance the EPA’s coming carbon regulations will wind up putting us all in the same (sinking) boat.

Yeah, I know: “Correlation != Causation”
So let’s call this one an “observation.” 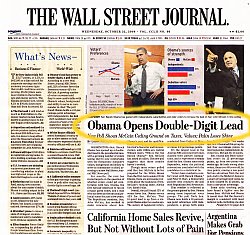 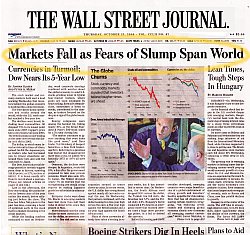 ...we realized we were about to see Jedis on a trade mission, which is like sending Ninjas for the GATT talks.

From Lileks (the quote, not the link), of course.

Our country is supposed to be dedicated to the concept of federalism: Minimal powers accorded to the overall, centrist government, with the balance of power devolved to “the States respectively, or to the people” as mandated by the Tenth Amendment.

Yes, believe it or not, that is the intended design: People in Tallahassee should not be deciding how fast you can drive in Broken Bow, Nebraska, and people in Atlantic City shouldn’t be voting on the capacity of the automatic pistol you bought in Colfax, California.

And yet, we have a nation’s capitol. It is surrounded by a beltway. Good conservatives like Peggy Noonan, Earl Warren, Anthony Kennedy, et al, cross over that moat surrounding the castle. And they become hard-core left-wing radical fringe extreme liberals.

...this is a really good argument for moving the seat of government to somewhere like East Jesus, Oklahoma, just to discourage the sort of people who (1) would really like to lord it over the rest of us and (2) can’t bear the thought of living in a place where you can’t swing a dead cat and hit restaurants of twenty-seven different ethnicities.

I’d go for (say) a 30-mile-square reservation on the border between Garfield and Rosebud counties in Montana. (Nearest “big city:” Billings, about 100 miles by road.)

Make the Congress and the bureaucrats live in barracks and eat at the commissary.  And no lobbyists permitted within the bounds of the reservation after sundown...

1 Yeah, I read your rotating capital city idea, and I like the way you think! But a move like this would disrupt things for a while, and it might be a long while (c.f., Brazil’s transition from Rio to Brasilia).  It would also make being a politician a little less fun, and I’m all in favor of that!

Of course the real answer is to claw some of the power back from Washington, but with the courts viewing the Tenth as a dead letter and given the kind of people who make careers in politics, I don’t see that as at all likely.

Bush made a mistake when he fired those DOJ lawyers.
Seems he didn’t fire enough of them:

About what?  Nguyen was tangentially involved with sending a letter that urged Latino citizens to vote but warned that illegal immigrants could be prosecuted if they tried to vote.

Every word in the letter was true.  But DOJ investigators were more interested in cracking down on the people who wrote the letter – a legitimate expression of free-speech rights – than on the illegal immigrants who may be voting.

The kicker: The DOJ attorney on the case, former Ted Kennedy-affiliated lawyer James Walsh, is as contributor to the Obama campaign, as is his boss, former ACLU attorney Mark Kappelhoff.

In all, DOJ lawyers and staff in the metro area have donated at least $150,000 to Obama.  No wonder they seem more interested in prosecuting those who warn against vote fraud than enforcing vote-fraud laws.

Sometimes Microsoft doesn’t seem quite so bad, after all...
Steven Den Beste:

...Konami has announced that when its game Aquanaut: Online Aquarium is uninstalled, the uninstaller deletes every file on the C drive.

They are sorry that we’re stupid enough to want to uninstall their game, and they’ll be releasing a fix when they get around to it.

Didn't anyone test that thing before it was released?