The “Protest Culture”
The Best Commentary is Often In the Comments  Dept
Those who lean toward viewing the administration’s lapses as stemming from incompetence rather than malice[1] may find this pair of comments[2] by “cfbleachers” a useful hook on which to hang their explanation:

We (at least, those of us in the center or rightward part of the political spectrum) still expect our government to respond in a strong and reflexive manner against any declared enemy who attempts mass murder of our countrymen.

But this current administration is made up of individuals belonging to a “protest culture.”  If they have a reflex, it is toward not away from, other protest cultures.

When actions by the current leadership seem incongruous to us, we must remember that they are the outcome of their own worldview.  Try viewing them through the eyes of an American “Protest Culture Club” member and things will crystallize.

To be fully cognizant of the impact of each step in the process, understand that there is an even further left, lefter, leftist spot on the protest culture spectrum.  Michael Moore not only views the war on terror to be a ridiculous notion, he considers our sworn enemies to be heroes.  And Ward Churchill believes that the innocents who died on 9/11 to be “little Eichmanns”.

Most (not all) of those nominated or selected for positions in this administration don’t go quite that far.  The “inner circle” seem to be quite content to stop at watering down the “enemy” to merely a “fellow protest culture, that, through circumstance, has us as its main target”.

PC responses are not just political correctness any longer, but rather, are protest culture guidelines.  Example: Protesting sometimes leads to raised emotions;  occasionally some individual gets so wrapped up in “fighting the establishment” that he gets carried away and commits a violent act.  But (so the thinking goes) we don’t want to condemn a whole “group” of Protest Culture participants for the acts of a tiny minority.  Instead, the ones who “gets out of hand” in “expressing themselves” should be handled within the confines of policing and “keeping order”.

Therefore, you don’t prepare in advance, because it is not a war.  You react after the fact, like calling the police…to keep order.

And…you search for “root causes.”  (Like blaming Bush, which is basically the “original sin” of the religion of Protest Culturists.)  Apply this mindset to every…every…instance, where this administration said or did something that caused you to shake your head in disbelief.

And, in the future, expect more the same.  If the reaction by the masses is too strong, expect lip service to what our eyes consider normal.  Then, watch every action/reaction revert to precisely the same as before.

We are living under the rule of a leadershp of Protest Culture club members: This is what it looks and feels like.  And if you are not a member, YOU…are more the enemy, than those who mean to kill us.

Remember, O. referred to “the alleged” perpetrator. “Alleged”??? Tell that to the passengers and the Dutchman who subdued him. “Alleged”?? In that one word the President conveyed all the subtext we need to know.

This is the difference between seeing a combatant caught in the act of guerilla warfare against us, and a “protest culture” participant engaged in an act against “the establishment”.

When you start to “lawyer up” the defendant for his “misdemeanor” of trying to mass murder 300 or more of our countrymen, you come up with some pretty mind-bending, pretzel twisting phrases to water down the act to fit the alternate reality of the protest culture.
o-o-O-o-o
...20% of the population (or less) accounts for the vast majority of the Protest Culture.  However, that 20% DOMINATES the Democratic leadership, legacy media, academia, hollywood and entertainment.

And being in a constant mental state of protest (it being their reflexive response, as opposed to, say, patriotism), explains why one would fake weather data, why one would need to “redistribute” wealth by invasive hidden tax mechanisms, why one would overhaul the nation’s health care system to shred the elective options for the sick and elderly, why one would champion Mao, Che, Fidel (all seen as comrades in arms, not as brutal dictators).

It explains the New Party.

It explains the reaction to the Gates altercation with the police and it explains the Ft Hood and Detroit Nigerian Nightmare situation reaction…such as it was.

It explains the flag pin as the “wrong kind of patriotism,” and the no hand over the heart for the Pledge of Allegiance.

It explains the Apology Tour and the deep bows to Arab princes.

What it doesn’t explain, is how 80% of the country allowed our culture to be swarmed by the pervasive effects of this in every corner where we disseminate our information and form our opinions and get our facts.

[2] Taken from the comments thread for this post at Pajamas Media. Quoted pretty much in their entirety, with a bit of editing for clarity.  The originals are here: 1.2

Two of the four leaders allegedly behind the al Qaeda plot to blow up a Northwest Airlines passenger jet over Detroit were released by the U.S. from the Guantanamo prison in November, 2007, according to American officials and Department of Defense documents...

American officials agreed to send the two terrorists from Guantanamo to Saudi Arabia where they entered into an “art therapy rehabilitation program” and were set free, according to U.S. and Saudi officials.

1 Well, if art therapy won't make them turn from their wicked ways, I don't know what will!

Hey Janet! Got a question here...
Breda wants to know:

Tell me again why I have to bear the humiliation of being groped.and.swabbed every time I fly? ... Can’t they just put me on a terrorist watchlist so that TSA will leave me alone?

And oh, by the way...
“Seabecker”, in a comment at Michelle Malkin’s:

Actually the system does work.  It worked exactly as designed.

The system is designed to inconvenience as many people as possible in the worst way possible, without looking for specific threats (i.e. profiling).  After all, it would have gone against the system to search a young Nigerian Muslim with known terrorist ties any more carefully than they would search your 90 year old WWII vet grampa.

And one thing I’d like to point out is that the system worked.


Hey, if a “working” system means they’re going to leave everything up to the passengers, how about doing away with all the security theater?

DHS had no role whatsoever in assuring that this bomb didn't go off.  By her logic if the bomb had gone off, the system would have “worked” since it [the DHS] has done everything right.

We apparantly have a psychotic liar working as Homeland Security Secretary.

I remember... Democratic political consultant Chris Kofinis summing up President Obama’s inaugural speech thusly: “I’m gonna tell you the truth,” and [characterizing it as] a rebuke of “the last eight years” -- of presumably “not telling us the truth.”

Napolitano’s comment doesn't quite live up to that spirit...

And the response of the TSA?

To further punish the passengers, of course...

Politico:  Napolitano: “The system worked”
Via:  Sanmon, commenting at Blackfive

-----
[1] in a post with the incredible subhead: “When someone from Nigeria named Umar Farouk Abdul Mutallab is lighting his pants in the window seat, it’s pretty hard to be politically correct and avoid reality,”  written by somebody apparantly unfamiliar with our Enlightened Establishment.  Rest assured, when it comes to being politically correct and avoiding reality, they’ll manage to find a way.

That was then...
Somerset Daily American:

JOHNSTOWN [December 22, 2009] — U.S. Rep. John Murtha [Democrat chairman of the Defense Appropriations Subcommittee]  told reporters Tuesday that he isn’t convinced al-Qaida is still a threat to national security.
...
“I don’t agree there is a threat to national security,” Murtha said, while not ruling out the possibility that he could be wrong about al-Qaida’s influence. “They keep saying they’ve defeated al-Qaida.”

The country’s in the very best of hands...

Remember those great Adolf Hitler ornaments that George W used to put on the White House Christmas Tree?
No, me neither  Dept
Big Government:

holiday season come between the White House and making some political statements?  The White House pegged controversial designer Simon Doonan to oversee the Christmas decorations for the White House.  Mr. Doonan, who is creative director of Barney’s New York has often caused a stir with his design choices...  For this year’s White House, he didn’t disappoint.

Of course, Mao has his place...

These people just can’t help themselves.

Via: AoSHQ, title by “Ghost of Christmas Past”

Gol-Dang that Metric System!
I thought you said there wouldn’t be any more math  Dept
Copenhagen Post:

Seven metres.  That is how much global water levels will rise if the ice in Greenland melts.  In connection with the climate meating, sculptor Jens Galschioet has hung flashing red lights seven metres up in trees and on lamp posts throughout Copenhagen.

The idea was to illustrate a prospective water level rise if the ice melts away in Greenland.  Yet, somewhere along the line, he made a few incorrect calculations.

‘Technically and pedagogically it is a sound idea.  The problem is that they are hanging at incorrect heights by the city lakes, where they currently sit at 11.34 metres’, said architect Ole Oerslev.

The city lakes are already 5.89 metres above sea level, so the flashing lights should have been put up at 69 centimetres height.

‘The rest of the lights put up around the city and out by the Bella Center are in the correct elevation.

Ummm, ’scuse me, but if the rest of the lights are “seven metres up” (as stated above), they’re wrong, too.  Unless the ground level in Copenhagen = sea level. But continue, please...

We wanted to display something downtown as well and even though we knew that the lights should have been at 69 centimetres, we didn’t really feel it looked like much.  So we cheated a bit and decided to explain if anyone found out’, explained Galschioet.

Well, that explains everything. 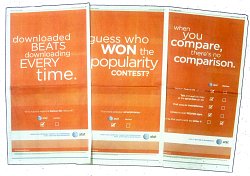