I’m not interested in giving them a national sales tax unless the 16th Amendment gets repealed first.

Actually, ESPN was probably upset because they thought Williams was comparing Obama to Netanyahu...
Hitler had Nuttin’ to Do With It   Dept

No matter, though. Williams used the words Obama and Hitler in the same sentence...

Not this time...
James Taranto:

Our guess is that if Romney is the nominee, the vast majority of Tea Partiers will hold their noses and vote for him, the way the nutroots types who loved Dean did for John Kerry in 2004.

Do you really want to bet on that, Bucky?  Really?

Not that we haven’t noticed the establishment’s efforts to convince us that the fix is in and it’s all over but the shouting... 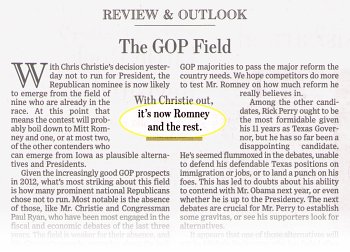 ...or the Gentry Republicans’ attitude toward the conservative base...

Two important tasks lie before us:  Clean out Washington in general, and the Republican Party in particular.  If it turns out that we must do the second before we can accomplish the first, well, so be it.

If the GOP manages to foist another RINO on the rest of us, who make up the majority of the party (add up the percentages of us voting in the primaries for Cain, Perry, Bachmann, Santorum, and Paul, versus those voting for Romney and Huntsman), and I think you will see the final crackup of the Republican Party as a viable political organization.

On top of stonewalling Rep. Darrell Issa’s House investigation of the [Fast-and-Furious] mess, Justice has floated a series of contradictory excuses:

You’d think the Justice Department had been taking lessons from the press.

“...the political class will commit collective suicide and take what remains of the European economy down with it.”
He’s talking about Europe, but I worry that the same attitude is at work here.

Warning: This party may be hazardous to your liberty
Fixed it for you:

Proponents of a more refined First Amendment argue that this freedom should be treated not as a right but as a privilege — a special entitlement granted by the state on a conditional basis that can be revoked if it is ever abused or maltreated.

"More refined” = "You rubes who read all that ‘shall pass no law’ stuff as absolute are way too unsophisticated for our modern, complicated world.”
"Privilege... granted... on a conditional basis” = "So if we dont like what you say, we will shut you up.”

Seems they not only want to get rid of elections, they want to make sure you don’t do any talking about it, either.


Elsewhere:
Volokh Conspiracy:  Four New York Democratic Senators: "Proponents of a More Refined First Amendment Argue That This Freedom Should Be Treated Not as a Right But as a Privilege”
TechDirt:  NY State Senators Say We’ve Got Too Much Free Speech; Introduce Bill To Fix That

(Hey, how about we introduce a bill to "fix” some NY State Senators?)

The Blaze:   Separation of Powers Not: "Take Away His Vote” — Dem Congresswoman Wants to Nullify Justice Thomas’ Rulings With "Retroactive Recusal”  (via Protein Wisdom)

The state does not grant rights.  The state acknowledges (by virtue of being denied the ability to abridge) rights which pre-exist and preempt the state.  (Or which were given us by $DEITY, if you roll that way...I do, but not everybody does.)

What these people want is to play God.  Which should disqualify them from holding any public office for life.