What would you trade for dinosaur-powered space lasers?
What we really want from Government  Dept
Joanna:

In a perfect world, any defense or NASA expenditure could be justified with the words “Because it’s AWESOME! Eh? EH?”  If it makes a randomly selected 14-year-old boy drool around his braces, it gets funded.  Granted, we’d end up with an arsenal of dinosaur-powered space lasers run by ninjas and the Swedish bikini team, but at least it would have full funding.

I’d trade the entire Department of Homeland Security for dinosaur-powered space lasers any day of the week.  If I can get “ninjas and the Swedish bikini team” too, I’ll throw in the Department of Education.

And further wise words from one so young:

Yep. 50 years ago, we dreamed of going to the stars.  Today Our Betters dream of turning America into 1950s eastern Europe.

I prefer AWESOME.  Let’s do it FOR THE CHILDREN!

I think our "betters" would be better employed as crash test dummies, personally.  Let's get them started on that and the rest of us can head for Mars.

It is not so, and it has never been so.  And now everybody knows it.

Everybody who watched C-SPAN, that is.  But most people don’t, and the ones who don’t will judge the Republicans by how the DSM reports the summit.

I’ll wait to see whether the Republicans manage to cut through the spin before accepting any sweeping claims about what “everybody” now knows.

If you look right now:

Overview
The regulatory compliance charge offsets a portion of the costs incurred by *** [company] to comply with mandatory rules and regulations imposted by Federal, State, and local governments.

The charge covers some costs [of complying with] governmental regulations related to... 1) Workplace and public safety; 2) Federal and local codes; and 3) Environmental protection. Listed below is a recent, but non-comprehensive, list of mandatory requirements affecting fuel suppliers...
Charge Costs
The regulatory compliance charge [will be] applied to deliveries for residential and commercial customers.

Frequently Asked Questions
Why are regulatory compliance charges becoming more common?
Today there are [more] mandatory compliance issues and charges than ever before...

Why do some energy companies have charges and others do not?
All energy companies are subject to the same regulations; however, some choose to embed these regulatory compliance costs in the price of fuel... At ****, we believe the fairest practice is to separate these charges out for your information.
...
What this means is that beginning next month I’m going to see a $2.82 line item on my delivery ticket.  Lovely.

The nation’s Homeland Security officers lost nearly 200 guns in bowling alleys, public restrooms, unlocked cars and other unsecure areas, with some ending up in the hands of felons...

Most of the misplaced weapons — including handguns, shotguns and military rifles — were never found. Most losses occurred because officers did not properly secure firearms,” says the Homeland Security inspector general report.

At least 15 of the guns ended up in the hands of gang members, criminals, drug users and teenagers...

Well, the obvious solution is for the BATFE to aggressively investigate the DHS’s poor weapons security and recordkeeping.

Thus making a start at keeping BOTH agencies out of our hair.

Blast from the past
Well, I certainly never expected this!   Dept
WRAL.com[1]:

I expect K.C. Johnson to have something about this shortly.

Gone Bayh-Bayh...
So The Indianapolis Star and The Washington Post are both reporting that Indiana’s junior Senator Evan Bayh has decided to pass on a run for a third term.  I’ll probably have more to say about this, but a few points come to mind immediately:
• Hoosiers usually vote for people they like, then for party.  While liberals don’t win statewide elections, Bayh has kept his reputation “conservative enough” to remain likable to most hoosiers (while usually voting “liberal enough” to satisfy most of his party’s progressives).  Although he’s under challenge from the left (see below), under normal circumstances he’d be a shoo-in for winning the primary and for reelection.

• Hoosiers also don’t vote strategically: They’re not going to say, “I should vote against this Democrat (who I like) because I would be better off if the seat was held by a Republican.”

• Bayh has a lot of money, and his organization does a lot of polling.  While the trend hasn’t been good, the numbers I’ve seen still show the seat leaning strongly Democrat.

• The strongest Republican challengers (Rep. Mike Pence and Governor Mitch Daniels) have already said they’re not interested.
So why this decision?  Short of the pending revelation of some yet-unforseen Dark Secret, I would speculate that Bayh’s internal polling is showing that the next campaign would be, for Bayh, a difficult one, and for the Democrats nationally, disastrous.  We’re talking loss-of-both-houses disastrous, which, if true, would also explain Mike Pence’s decision to stay out of the Senate race and remain in the House (in a Republican sweep, Speaker of the House trumps junior Senator).

I would also note that Bayh’s statement, which complains about the stalemate and lack of bi-partisanship in Congress, backhandedly endorses the wisdom of the Republican strategy of refusing to provide the super-majority Democrats with political cover.  Bravo.

Meanwhile, Scott at The Hoosierpundit offers a short list of possible Democrat candidates, but in a subsequent post notes that Indiana University student (and “healthcare activist”) Tamyra D’Ippolito, who had been attempting to challenge Bayh in the primary, was (as of the 12th) only 1,000 signatures away from getting on the ballot.  Now read on:

Bayh declined reelection at the last possible minute so that no Democrat would be on the [Democrat primary] ballot for Senate in Indiana, and thus Democratic Party insiders (largely Bayh cronies) would pick who is on the ballot in November.

If Tamyra D’Ippolito is on the ballot, then that’s all she wrote.  They can’t pick anyone else. She will be their nominee, period.

The deadline for signatures is Tuesday (tomorrow), noon.  Hey, tea partiers, wanna have some fun and see a real leftist as Democrat nominee?

2 According to Senate voting records, Bayh has yet to vote against any Obama or party initiatives.  How does that make him "conservative enough?"

3 @ Crucis,
Note that I said “kept his reputation ‘conservative enough’”... which has as much to do with marketing (and media protection) as it does with his actual voting record.

This year I had expected a no-vote on cap-and-tax (with Lugar voting “aye” to maintain his internationalist creds - result: Bill still passes). With that and his vote against the Omnibus Spending Bill (which still passed), Bayh could make claims of “protecting Indiana's interests” and being “fiscally conservative”, without affecting the Obama agenda one whit.  But the majority of his campaign would conisist of feel-good TV about “working for Hoosiers” and “experience in Washington” (and the like). That alone would probably be enough to get him re-elected, as the Indiana press - especially the Gannett papers - are too far in the Democrat tank to ever mention his record- let alone analyze it critically.

Spread it around!
Commenter Rich Rostrom (over at Weasel’s place), on the prevention of political dynasties:

JW[1]:  I’d go further: “No one shall be eligible for election to any office of the United States, or of any state, or of any territory, or any local or municipal government under the United States or any state or territory, whose spouse, or sibling, parent, grandparent, or parent’s sibling, by blood, adoption, or marriage (including former marriages), has previously served in that office by election; all seats in any legislative assembly or adminstrative commission being considered the same office.”

This would get rid of Senators Dodd and Bayh, and about 30 Representatives.

It would have prevented Senators Lincoln Chaffee, Al Gore jr., Liz Dole, Bobby and Teddy Kennedy, and a great many others in the past (there were five Senator Bayards from Delaware).  Also Pat and Joe II Kennedy (JFK was in the House for three terms).

One thing – the previous holder has to have been elected.  Otherwise, the opposition could appoint some relative who hates you to the office for a day, and then you’re blocked.

------
[1]  ...who had proposed “a bill that would eleminate every second generation from following in their daddys’ and mommys’ footsteps in the political field.  Maybe make it every third generation”

1 Unconstitutional in Indiana, as we have a clause prohibiting "corrupution of the blood," meaning inheritable penalties.  Generally applied to criminal offenses but there's more than enough meat on it for am attorney to get his teeth into.

OTOH, inheriting a political dynasty is kinda corrupting the blood, too, if you ask me....

2 This is a great idea. Put it along with term limits and we've got a winner.

One afternoon at the office
Today they came out and marked the buried fiber... 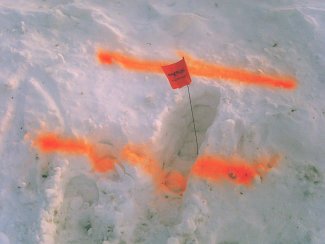 1 It puts me in mind of a photo I saw where the yellow stripe down the middle of the road was painted *over* a dead possum.

Monty Python’s Global Warming
Or, what we’d be laughing at, provided the Pythons were (1) still in business, and (2) hadn’t morphed into a bunch of hidebound “progressives”.[1]

Ladies and gentlemen, scripted by AoS commenter “Merovign, Strong on His Mountain,” I give you The BBC Interview:

Certainly a change from pizza...
She’s a man-eater  Dept
Joanna:

My friend once commented that she had a vegetarian sandwich for lunch.  I asked her if it was a free-range or factory-farmed vegetarian.

She didn’t get it.