House Democrats hear the rumbling of a potential Republican takeover come next term.  The last thing they want is a lead up to the presidential election with a Republican House majority loudly airing the Democrats’ dirty laundry.  So...

Have an investigation while they’re still in chage, give the culprits a slap on the wrist, claim that “the process” worked, and then scream like stuck pigs about double jeopardy should the Republicans try for a more-thorough look in 2011.

Today’s Emily Litella moment
Protecting The Agenda Dept
Time publishes a contrarian piece that contends the President’s characterizations of the Gulf spill may have been “exaggerated:”

...So far — while it's important to acknowledge that the long-term potential danger is simply unknowable for an underwater event that took place just three months ago — it does not seem to be inflicting severe environmental damage.  “The impacts have been much, much less than everyone feared,” says geochemist Jacqueline Michel, a federal contractor who is coordinating shoreline assessments in Louisiana.

...and folks wonder why a paid-up member of the DSM dissed the Prez:

WTF?  Where does some punkass fish wrapper rag like Time get off daring to even suggest that the ascended Messiah was wrong?

Well, maybe this has something to do with it:

The Coast Guard has gathered evidence it failed to follow its own firefighting policy during the Deepwater Horizon disaster and is investigating whether the chaotic spraying of tons of salt water by private boats contributed to sinking the ill-fated oil rig, according to interviews and documents.

Coast Guard officials told the Center for Public Integrity that the service does not have the expertise to fight an oil rig fire and that its response to the April 20 explosion may have broken the service’s own rules by failing to ensure a firefighting expert supervised the half-dozen private boats that answered the Deepwater Horizon’s distress call to fight the blaze.
...
...The question of what caused the platform to collapse into the Gulf two days later remains unanswered and could prove vital to ongoing legal proceedings and congressional investigations.

That is because the riser pipe from which the majority of BP’s oil spewed did not start leaking until after the rig sank.  Experts and some lawsuits have openly tied the sinking of the drilling vessel to the severity of the leak.

But then, if it turns out there wasn’t a disaster, then government-agency bungling couldn’t have contributed to one... right?

1 Never waste a good crisis, though.

Hey Captain, don’t leave yet, the show’s just starting!
The Ruling Class   Dept
A change of government in the U.K., and oh, look what comes out!

A cackling Phil Booth, No2ID National Coordinator, writes to tell us that six months after he first pestered the Identity & Passport Service about its quotes from ID card-toting happy campers in its publicity material, it has confessed - um yes, all but one of those quoted worked for the government. - The Register

The Department for Transport (DfT) has “unwittingly” misled the public over the benefits of speed cameras for the last four years. That was the shock admission yesterday by a DfT spokeswoman, when finally cornered by the Department’s own research.

Of course, our government would never do stuff like that.  (snicker!)

The US government secretly advised Scottish ministers it would be “far preferable to free the Lockerbie bomber than jail him in Lybia.

Correspondence obtained by The Sunday Times reveals the Obama administration considered compassionate release more palatable than locking up Abdel Baset al-Megrahi in a Lybian prison.
...
The document, acquired by a well-placed US source, threatens to undermine US President Barack Obama's claim last week that all Americans were “surprised, disappointed and angry” to learn of Megrahi’s release.

I think most people on the left live in a world where merit is irrelevant.  Theirs is a world in which connections, networking, kissing ass and obedient sameness are rewarded.

Hey Rush, it’s not just the “people on the left.”

Can I call ’em, or what?
Standard Progressive tricks  Dept
Here, June 17th:

There’s mounting evidence that the current mess is a direct consequence of your lousy ideas.  The opposition will try to say this.  They must be countered.  To defend the agenda, create a distraction: Start a noisy fuss about “leadership,” and hope they’ll be sucked in.  Throw your leader under the bus.

It seems the Times has decided to throw the President to the wolves in the hopes that a better candidate will come along by 2012.  How else to explain yesterday’s bombshell ObamaCare articles stating outright that the President’s signature program is a tax and that it will restrict doctor choice?  And then today’s articles, including the GM, Chrysler article I posted about this morning...

Blame your patsy;  protect the Agenda.

1 The link to the Malor piece is borken.

Thanks, Grouch. He's better, albeit still smaller than normal.

The University of Illinois has fired an adjunct professor who taught courses on Catholicism after a student accused the instructor of engaging in hate speech by saying he agrees with the church’s teaching that homosexual sex is immoral.

Maybe if he’d said “they should be stoned to death” instead...

“Well, don’t do that!”
Web 2.0 Fail  Dept
Y’know, if your commenting system is so wonky that you have to post messages like this... 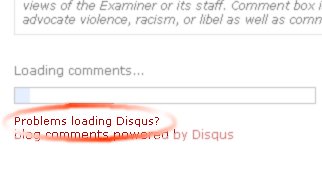 ...perhaps you should look into a different commenting system?