Football’s world governing body FIFA wrote to the Iranian football federation on Wednesday to ask for answers over alleged punishments meted out to several of their players for wearing wristbands reflecting their support for opposition presidential candidate Mir Hossein Mousavi.

Six of them wore the green wristbands during the 2010 World Cup qualifier 1-1 draw with South Korea last week, including two of their icons Ali Karimi and skipper Mehdi Mahdavikia.

It has been reported, largely by English television station Channel Four News on Tuesday and the left-leaning Guardian newspaper on Wednesday [link added - o.g.] that [the players] had been told they would never play for their country again because of their stance.

The time for such discussion of fundamental issues has passed for this round. The administrator and the administration has decided to move forward on endangerment, and your comments do not help the legal or policy case for this decision… I can only see one impact of your comments given where we are in the process, and that would be a very negative impact on our office. - March 17, 2009 email from Al McGartland, Office Director of the Environmental Protection Agency’s National Center for Environmental Economics (NCEE), to Alan Carlin, Senior Operations Research Analyst at NCEE

Too bad it’s not a Republican administration.  Otherwise, we could have a media circus, followed by a congressional investigation!

Why not call it “The Waxman-Markey ‘Let’s all subsidize California’ bill”?
From Power Line:  Winners and Losers on Cap-and Trade: 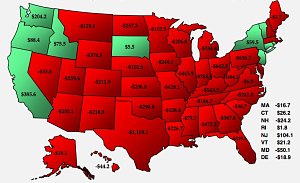 Officers were trying to serve a warrant for a man wanted on drug charges. The address listed on the paperwork was 4042.  The Minton’s home is 4048, with both house numbers clearly marked.

But Major Mark Robinett of the Marion County Sheriff’s Department, who is in charge of warrant sweeps, said he was told that officers had a difficult time reading the addresses because of overcast skies. - WRTV News: “Family Angry After Police Target Wrong House”

Let me get this straight:  the clouds were in my eyes?

Too bad I do not have any cases in Marion County where I could use this.  E.g. an OWI.  "Judge, my client was not too drunk to see the stop sign--the clouds were in his eyes."

Major Robinett would be listed as an expert witness in every single case.

Empty suit
Knock knock! Anybody home?  Dept.
Does anyone share my reaction to this?

Obama likes to execute long-range strategies but suffers from cognitive dissonance when new facts render them inappropriate.  His 2008 campaign was a largely flawless execution of a smart strategy, but he was flummoxed momentarily when the Russians invaded Georgia and when John McCain picked Sarah Palin as his running mate...

His long-range strategy of propitiating America’s enemies has been undercut by North Korea’s missile launches and demonstrations in Iran against the mullah regime’s apparent election fraud...  He limits himself to expressing “deep concern” about the election... while he misses his chance to encourage the one result — regime change — that could protect us and our allies from Iranian attack. - Michael Barone

Sounds like a man who so distrusts his own knowledge, ability, and instinct that any nontrivial change in circumstances sends him running to check with his handlers.  Or like some badly-programmed CNC system that, faced with an unusual input, locks up until its operators can rescue it.

Intelligence, principle, and guts should be enough to stand any president in good stead, even when the going gets weird and the advisers are out-of-reach.  And political instinct can make getting by possible, even when I, P, or G might be lacking.  Yet time and again, when events move beyond some pre-defined boundary, we have seen Obama freeze up, change the subject, or react inappropriately.

It’s almost like we’re being “led” by an empty suit, the sockpuppet of some ruling committee, incapable of moving beyond its instructions until the next meeting.

Scary when you think about those 3am phone calls.  (HT: Ace)


Related:
Andy McCarthy says the President’s Iran response is just power politics.
Elsewhere:
A man tyrants can do business with

The top U.S. general in Afghanistan will soon formally order U.S. and NATO forces to break away from fights with militants hiding in Afghan houses so the battles do not kill civilians, a U.S. official said Monday...

Gen. Stanley McChrystal, who took command of international forces in Afghanistan this month, has said his measure of effectiveness will be the “number of Afghans shielded from violence,” and not the number of militants killed. - AP story via Breitbart

“Number of Afghans shielded from violence” sounds about as bogus (and as measurable) as the president’s “number of jobs saved or created.”  And if it’s not about killing “militants,” then wotthehel are our soldiers doing there?

...one of the most important Marine Corps operations thus far in the campaign wouldn’t have been conducted under the new ROE because there was no certainty regarding noncombatants.

The written exam, given as part of Department of Defense employees’ routine training, includes a multiple-choice question that asks:

“Which of the following is an example of low-level terrorism?”

The correct answer, according to the exam, is “Protests.”

“It’s part of a pattern of equating dissent and protest with terrorism,” said Ann Brick, an attorney with the American Civil Liberties Union, which obtained a copy of the question after a Defense Department employee who was taking the test printed the screen on his or her computer terminal. - Fox News

Ya see, despotic, totalitarian governments do view protests as dangerous, so whaddaya expect?

The Chief of Naval Operations Adm. Gary Roughead announced in Annapolis recently that “diversity is the number one priority” at the Naval Academy.
The Naval Academy superintendent, Vice Adm. Jeffrey Fowler, echoed him. - Bruce Fleming, The Capital

To which “Uncle Jimbo” declares, “Good gravy sir, I would have hoped that turning out the best Naval officers possible would have been the number one priority.”  Well, that was then...

Oh, but that’s DIFFERENT
Sauce, goose, gander  Dept.
Y’know, if  giving investors a “say on pay” is such a good idea, maybe Congress should extend it to their constituents. 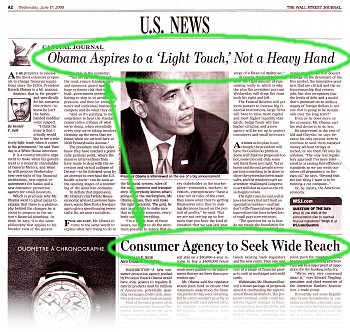 DTV transition fallout
Analog is still around.
Turns out that my local “SkyTrak Weather Network[1]” LPTV.NTSC transmission on channel 50 remains on the air, which gives me one less reason to rush out and acquire a CECB.  (This weekend’s watching, aside from a few minutes of weather radar: Selections from Looney Tunes Golden Collection v.6, and a couple of episodes of Waiting for God, season 1.[2])

Missing stations - in the primary service area.
At dinner with a friend last evening, she recounted the results of her rescan-after-switchover: Her HDTV gets about half of the channels it’s “supposed” to receive: No CBS affiliate, no CW affiliate, either no NBC or no ABC (I forget which). Does get PBS, ABC (or NBC), FOX, and two religious stations. All of the missing channels had been “no problem” in analog.  This is at a location about 2½ miles straight north of downtown - near 30th and Meridian Streets. (Guess she’ll have to put up an antenna, or wait for those rumored power adjustments.)

No urgency for some.
She also gave an account of a conversation she’d had at a party Saturday night attended by a bunch of arts and media types.  Most of those folks do not have cable, and to a man (or woman) none had yet bothered to acquire either a HD television or a converter box.

Grant the possibility of intellectual posturing of the “Why, I simply never watch any television. Except occasionally PBS. And the morning news. And 24...” sort. (You get the idea!)   But even if only partly true, this should be a worry to the networks: The last thing they need in this economy is for this desirable demographic to wander away.


Elsewhere:
“If you are dense, please call the number on the bottom of the screen that you can't see...”
-----
[1]  Be warned: This is one of those furshlugginer “WorldNow” [don’t click this one, either] powered sites that takes forever to load if you’re not running high speed. The SkyTrak main page is even worse: Despite disabled Flash and having a bunch of offsite javascript and adservers blocked, it still takes 5 minutes to display.

O.G. reads the weekend WSJ “Opinion” page...
...so you don’t have to.
(Wherein O.G. reacts to a wasted 20 minutes at breakfast this morning.)

Peggy Noonan: The Case for Getting off Base
A 1200+ word bleat from the beltway establishment.  Executive summary: The Republican Party pays too much attention to its base (!), and Rush Limbaugh should shut up; lest the legacy media continue to characterize Republicans as “the party of ‘angry white men’” and RNC Chairman Michael Steele continue to look like a wimp.  Pullquote:

When Michael Steele gets up in the morning, 20 million people don’t wait aren’t waiting [ FIFY - o.g.] to hear his opinion.

It’s yet another rehash of the old “Republicans can win, provided they don’t take positions the media doesn’t like, and don’t say anything the media can misrepresent” argument.  For why this doesn’t work, see Goldstein.  For an example of breaking out of the MSM box, see Palin.  Forget Noonan.
Peter Berkowitz: Conservatism and the University Curriculum
Progressive-dominated university Poli-Sci departments neglect the “conservative tradition in America,” so “students are condemned to a substantially incomplete and seriously unbalanced knowledge of their subject.”  But “affirmative action for conservatives is a terrible idea.”  Pullquotes

Berkowitz makes an intellectually-driven argument which fails in the face of an ideologically-driven situation. No one will listen, nothing will change, 1000 words wasted.
George Ball: Naturalism Has Been Hijacked
Ball belatedly discovers the anti-human loonies in the environmental movement, and quotes some examples.  But instead of naming names (“one activist author,” “a Yale professor”) and calling bluffs, he blithers away at trying to define their politics:

Their anti-business stance might mark them as liberals, while their hard-edged fundamentalist views about nature and brittle nostalga for a lost Peacable Kingdom are surely conservative.

Waste of time.  Just call them self-hating moonbats, say “Hey buddy, if humans are so bad for gaia, why haven’t you killed yourself?”, and be done with it. (750 words)