Not exactly the best way to get the server back up

POWER LINE SUFFERS A denial-of-service attack but is undeterred.
Posted at 10:54 am by Glenn Reynolds

Must be some Xenophobic right-wing redneck
... who wrote this:

“The mistake we can never repeat is stifling criticism of cultures and religions for reasons of tolerance.”

Government and politicians ha[ve] too long failed to acknowledge the feelings of “loss and estrangement” felt by [...citizens or our...] society facing parallel communities that disregard its language, laws and customs.

[to immigrants:] “Let go of where you come from; choose [...your new country...] unconditionally.”

How about the Netherlands’ largest left-wing political group, the Labor Party?

Could it possibly be that, when the chips are down, political-correctnesss and progressive multi-culturalism might not trump cultural survival?  Stay tuned!

What say we forget the whole thing...
First it was the Islamic symbolism.

Relatives of those who died aboard United Airlines Flight 93 want the Bush Administration to seize the land needed for a memorial where the plane crashed in western Pennsylvania during the 9/11 terrorist attacks.

Why no.
It could mean some of C.M.O.T. Dibbler’s “genuine pig-like product...”

But that would involve *logic*...
Wanna bet?

After all, you can’t concede that it’s OK for people to heat their homes with coal but then object to the use of an electric baseboard heater because the electricity is generated from burning coal. - ShopFloor

(Of course the self-consistent alternative is to not allow people to heat their homes at all.)

Cats helping dogs
Not new, but still makes me smile.
A friend sent this one in an e-mail: 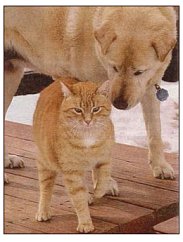 Cashew, my 14-year-old yellow Lab, is blind and deaf.  Her best friend is Libby, 7, her seeing-eye cat.  Libby steers Cashew away from obstacles and leads her to her food.  Every night she sleeps next to her.  The only time they are apart is when Cashew goes for a walk.  Without this cat, we know Cashew would be lost and very, very lonely indeed.  Amazing but true: this is one animal that knows what needs to be done and does it day in and day out for her friend.
- Terry Burns,
Middleburg, Pennsylvania

Like many web memes, this one has been kicking around for a while; at least 3 years, as it turns out. Since then:

Libby, owned by Terry and Deb Burns, is being honored by the American Society for the Prevention of Cruelty to Animals as Cat of the Year for her loyalty to the Burns' now-deceased dog, Cashew.

Cashew, a yellow Labrador/Shar Pei mix who died in 2005 at 14, gradually went blind and deaf due to old age...

The Burns and Libby will be honored Thursday during the ASPCA's annual Humane Awards Luncheon in New York City. - The Daily Item

So farewell, Cashew. Looks like you had a fine friend.

Elsewhere:  Scroll down for the story of Mancat.

“Sit in the dark and eat a Mars bar”
Some Christmas advice I didn’t take:

SCIENTISTS have warned that Christmas lights are bad for the planet due to huge electricity waste and urged people to get energy efficient festive bulbs.

CSIRO [Commonwealth Scientific Research Organisation, Australia] researchers said householders should know that each bulb turned on in the name of Christmas will increase emissions of greenhouse gases.

Dr Glenn Platt, who leads research on energy demand, said Australia got 80 per cent of its electricity by burning coal which pumps harmful emissions into the atmosphere...

He said the nation’s electricity came from “centralised carbon intensive, coal-based power stations” which were responsible for emitting over one third of Australia’s greenhouse gas emissions.

and there should be No Feasting, Either:

MORE than 3 million tonnes of Christmas food will be dumped in landfills this month - where it will produce environmentally-damaging methane gas.

John Dee, founder of sustainable living group Do Something, said Australians spend $5 billion every year on food we buy but don't eat.

“And December is the worst month,” he said.

“What many Australians don't realise is that methane from Christmas food waste is 20 times more potent a greenhouse gas than the carbon emissions coming out of your car exhaust...

“People have no understanding of the damaging food waste is just from a climate change perspective.”

So after you’ve turned your Christmas tree lights off, you can sit in the dark and eat a Mars bar instead.  Yep, we sure know how to enjoy ourselves Down Under!

...while wearing our environmentally-correct hair shirts.

Making too much of a good thing
Jonah Goldberg:

It was during the oughts that Americans started drinking more bottled water than beer.  As Susan McWilliams of Pomona College observes, you can tell something about a society that chooses clever water over humble beer.  Bottled water is personal, inward-driven.  Beer is social, outward-driven.  Beer gets the party started.   Water is the thirst quencher of choice for the solitary fitness addict, marching to the beat of his or her own drummer, digitally remastered for the iPod.

but not because I’ve suddenly turned all inward-driven and new-agey.[1]   No, it's mostly out of convenience.

Because I drink most of my bottled water at work.[2]

The arrival of bottled water added a welcome choice to the drinks selection.  Oh, there was always the inevitable coffee, but before bottled water the “cold” choices in my workplaces were usually limited to soft drinks (calorie-ful with high fructose corn syrup or Artificially Sweetened for Chemical Aftertaste), good ol’ lukewarm curdley milk out of the breakroom fridge, or the occasional Enormous Jug of Training Beverage.  That, or a drink from the infamous Water Fountain Of Doom down the hall: 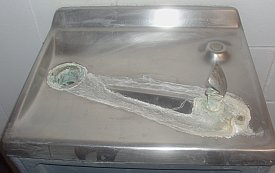 Bottled water fits nicely in the community refrigerator, doesn’t go bad, and the half-liter bottles are a nice size for the desk.  When bottled water is available, I find myself drinking less: (1) coffee, especially during warmer weather and (2) soda, especially since the acquisition of thirty or so unwanted pounds.

As for social imbibition, beer remains my default choice.  If I consume less beer than before, well, it’s probably the combination of getting out less,[3] and drinking more Scotch.[4]

So I dunno. “Inward-driven” and “solitary” are the right sounds for making particular social commentary, but sometimes a cigar is just a cigar.

[2]  ...a venue where beer-drinking is frowned upon. Usually.

[4]  ...which I don’t believe reinforces what Goldberg is concerned about.

“Reading and writing” have nothing to do with it...
The National Council of Teachers of English defines “21st Century Literacies.” God help us (or at least, God help their students):

Next big thing:  After-school reading coaching, to go along with the after-school math coaching.