Government of MEN, not LAWS... oh, wait!
From NewsBusters:

Unsurprisingly, Mr. Blumenthal is a Democrat.

So tell me again why we continue to have anything to do with this bunch of losers?
“Because getting beat up makes anti-American progressives feel good?”
I see...

More power to ’em
This evening, Glenn linked a Wired article by Brendan Koerner, “Power to the People: 7 Ways to Fix the Grid, Now.”  It’s not a bad article, as such go, at least as a layman’s explanation of the issue.[1]  But it gets off on the wrong foot with this inaccuracy:

Go ahead, blame Edison.  He’s the guy who invented the business model that got us into this mess.  Edison Electric Light, founded in 1880, was a vertically integrated monopoly that controlled everything from generation to distribution.  (It even owned the bulbs in customers’ homes.) As utilities sprouted across the country, they saw no reason to deviate from Edison’s successful blueprint.

You see, Edison’s system was Direct Current, and in those pre-transistor days, D.C. presented a problem:  Practical transmission of D.C. electric power was limited to a mile or so, because of cable resistance.  More than a mile, and the conductors had to be made so thick as to be impractical.  Oh, you could raise the transmission voltage, but higher voltage would be more hazardous, and there was no efficient way to knock a high transmission voltage down to something more suitable for consumer use.  So Edison’s central generating stations were limited to locations where the customer density was high enough to keep the transmission lines short.  For others, Edison’s “Company for Isolated Lighting” would install stand-alone generating plants.[2]

Westinghouse, on the other hand, championed an Alternating Current system.  A.C. could utilize high transmission voltages, even voltages greater than the generators produced, because A.C. voltages can be raised or lowered by using a simple, no-moving-parts device made up of two coils of wire wrapped around an iron core: the transformer.  The advantages were obvious, especially for locations that required long transmission distances or had low customer density.  When the famous Niagara Falls.power project went on line in 1895, it was equipped with Westinghouse A.C. generators.  Edison, on the other hand, continued to champion D.C., and came late to the A.C. party.

So Koerner gets it exactly backward (maybe he was too busy frothing at the Edison Company’s “vertically integrated monopoly”).  If we had continued to follow Edison’s original model, big generating plants would be found only in major urban areas.  Everywhere else you’d find small neighborhood plants, or generators whirring away in the basement.  The “grid,” if any, would be rudimentary. 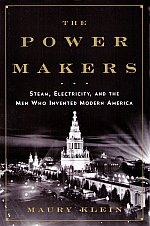 And the efficiency problem would be far greater than the 7% grid transmission losses which (a different) Wired article decries.

The other irony is this:  For many 21st Century applications, D.C. is actually “better” power.  Electronic devices, computers, radios, and the like, use D.C. exclusively.  Electric heat and most types of lighting don’t care what kind of power they get; in fact A.C. lighting can produce stroboscopic effects that are annoying, and, in some circumstances, dangerous.  Only certain types of motors do better with A.C.  But D.C.’s advantages were swept away by A.C.’s efficiencies of large-scale generation coupled with long-distance transmission.

So in today’s home or office you can find a host of items whose first task is to convert the A.C. that comes out of the wall outlet into D.C., so they can do their jobs.


Suggested reading: Check out Maury Klein’s book The Power Makers (Bloomsbury Press, 2008) if you want to know more of the fascinating story of the electrification of America.   (The image above is a link to the Barnes & Noble product page.)

-----
[1]  Be sure you don’t overlook the “10 Ways” in the article’s sidebar. There are some good ideas, although the mix of too much command economics with an insufficient grasp of engineering realities bothers me.

[2]  One of the earliest (with its own boiler, steam engine, and dynamo) went into in the New York City home of J. Pierpont Morgan, which was too far uptown to be served by the Edison Company’s pioneering Pearl Street generating plant.

1 See, it's little things like this that I love about the Internet -- I had no idea the grid was laid out that way for a reason. Oh, the places I could go with that in some of my writing projects ... must ... include ... esoterica! Must!

The List: Add Grassley, R-Iowa
First it was cheap demagoguery.

And now he’s co-sponsoring the Senate’s version of the bonus tax.[1]

The Prime Minister’s Gift, Round 2
Unbelievable!!:

While not exactly a film buff, Gordon Brown was touched when Barack Obama gave him a set of 25 classic American movies – including Psycho, starring Anthony Perkins on his recent visit to Washington.

Alas, when the PM settled down to begin watching them the other night, he found there was a problem.

The films only worked in DVD players made in North America and the words “wrong region” came up on his screen.  Although he mournfully had to put the popcorn away, he is unlikely to jeopardise the special relationship – or “special partnership”, as we are now supposed to call it – by registering a complaint.

A White House spokesman sniggered when I put the story to him and he was still looking into the matter when my deadline came last night.

By the way, when Obama’s unlikely gift was disclosed, a reader emailed me to ask if Clueless was among the films.  Funnily enough, it was not.

At least somebody is finding cause for amusement.

Quite frankly, I’d rather be grinding my teeth in annoyance at his success in implementing policies with which I disagree, than to be flabbergasted by the sheer ineptitude he has been demonstrating.

I’m not quite to that point.  Not yet.   But it is rapidly approaching.

-----
[1]  I think perhaps three balls would be about right: As for voicing previews for the next space movie, or weekend drag race radio spots.

1 What a niggardly gift to get a visiting Prime Minister.  I saw the movie list.  Half of those titles, you can get from the cut-out bin at Blockbuster.

Yup, that's the word William F. Buckley got in trouble for using yea so many years ago:

You've inspired me.  I was writer's blocked for a post tonight, now I have one.  The 15 movie set I'd like to give Prime Minister Brown.  I better go back to the Hyperbolic Chamber and get typing.

Yep, those federal centralized medical records will be *SO* helpful
Frank Munger:

Free medical screenings for workers at Oak Ridge and other Department of Energy sites have been put on hold while DOE investigates an incident in which personal information could have been compromised and establishes a new protocol for handling such data.

The incident involved a lost disc containing the personal information for thousands of current and former employees at DOE’s Idaho National Laboratory...

According to information provided by Queens [Queens College, N.Y., a participant in the screening program] and the United Steel Workers Union, which coordinates the screening programs at Idaho, the computer disc was reported lost Jan. 30. It was being shipped via UPS from Queens to the Center to Protect Workers’ Rights in Maryland.

Jim Frederick, the assistant director of health, safety and environment for the USW, said the disc contained the personal information for 59,617 current and former workers at the Idaho laboratory. That information includes names, social security numbers, dates of birth, and other personal data.

Did you vote for the stimulus bill?

I just saw a clip from this morning’s hearing [on the AIG bounses] where a congressman asked, “How could the government do something so stupid?,” apparently with complete sincerity. - “Dave E.,” in a comment at JustOneMinute

In the midst of life...
Was working up another post of cat links (seems to be a lot happening this week).

On checking in at Rahel’s, I found that the Missy, whose pictures I’d linked just five days ago, has died.


Cherish ’em while you’ve got ’em.

We need somebody doing this...
S.Weasel:

The peppery proprietor of Devil’s Kitchen has started to poke around the British world of fake charities, with a site called…ummm…Fake Charities.

Turns out, many of these organizations get, like, 1% of their money from real people donations.  The other 99% comes from government — either the British government or the European Union.  These are groups lobbying for things like higher booze prices or lower speed limits or restrictions on the internet.  Paid for with our money...

The entries for some organizations are quite interesting.  For example, consider Sustain: The Alliance for Better Food & Farming:

The charity is a modern-day “back to the land” charity that campaigns for people to consume less meat and milk in favour of more organic food and vegetables.  It opposes intensive farming, wants a ban on “junk food” advertising and claims that eating the “wrong” food causes mental illness.

According to its 2007 accounts, Sustain was given the following grants: This revenue amounts to more than half of the charity’s total income.  There is no record of any voluntary donations from the public.

Similar shenanigans occasionally come to light on this side of the pond,[1] but I’m not aware of any one-stop resource for tracking the “independent” groups involved.  Such a site would be most handy in vetting the objectivity of the source the next time some rewritten press release gets big play in the MSM.

Related:
Lots of smoke, little fire.
Welcome to the Peoples Republic of Colorado.
Your tax dollars at work.
-----
[1]  Besides lobbying the government to take away our liberty, many of these groups produce those mother-knows-best “public service announcements” that hector you to “do this” or “don’t do that” on local radio and television.