Maybe he’s getting a commission from Adobe?
It’s Web2.0 and Aren’t We We Aren’t Thrilled Dept
If you’d like your readers to check out your statement, it seems really stupid to send the interested ones to a website that (1) requires Flash to (2) download a PDF document.

For years and years I have awaited the network broadcast of “A Charlie Brown Christmas” as the true herald of the holiday season.  I brought my kids up with the same tradition — one which has been made no less special for us by the fact that they happen to be Jewish.

Tonight we sat in horror and watched what you have done to the single greatest cartoon ever made.

How many minutes did you cut out of “A Charlie Brown Christmas” so you could run more commercials?

Gone was Sally’s materialistic letter to Santa, which finally sends Charlie screaming from the room when she says she will settle for 10s and 20s.

Gone was Schroeder’s miraculous multiple renditions of “Jingle Bells” from a toy piano, including the one that sounds distinctly like a church organ.

Gone was Linus using his blanket as an improvised slingshot to knock a can off the fence no one else can hit, complete with ricochet sound effect.

Gone were the kids catching snowflakes on their tongues and commenting on their flavor.

Gone even was poor Shermy’s only line.  He thought he had it bad because he was always tasked to play a shepherd.  He had no idea.

And why were all these classic scenes cut?  To plug more ads into the show, of course.  To sell burgers and greeting cards — and to relentlessly plug the insipid-looking new Disney “soon to be a classic” show immediately following.  (I didn’t watch the new show, by the way.  I was laid far too low by what had just happened.)

Cramming all of these ads into the 30-minute broadcast of “A Charlie Brown Christmas” required major edits to a cartoon that has spent 44 years now trying to remind us that Christmas is supposed to transcend crass commercialism.

Do you have no sense of irony?

A couple of weeks ago I noted that you can now buy a plastic replica of the pathetic little real-wood Christmas tree Charlie Brown brings home from the tree lot otherwise monopolized by shiny fake trees.  I thought we had sunk as low as we could.

Obviously I was wrong.

Oh, and by the way:  The sound was half a second behind the picture: They were not synched properly.  I thought this was pretty sloppy for a major TV network, but I was willing to look past it.

What I cannot look past is the chopping to bits of a genuine classic, not just to pump more ads at us, but in direct conflict with the message that has made it a classic.

When I was a kid, the annual broadcast of “A Charlie Brown Christmas” was a holiday unto itself.  It was the only time we ever saw ads for Dolly Madison snack cakes, for one thing.  But more importantly, it actually framed the coming holiday for me in a meaningful way.

The shepherds in their fields had no corporate sponsors.  Nobody had bought the naming rights for the manger.  The infant Jesus did not have an endorsement deal lined up with a particular line of swaddling clothes.

Instead he came, the story goes, to preach universal love, and the abandonment of false ideals like the acquisition of gross material wealth in favor of something far more valuable.

You have not just lost sight of this, or turned your backs on it.  You have stomped it into the mud.

You should be ashamed of yourselves.

But I bet you aren’t.  I bet you’re way past that.

Count my family out for next year.

Yet another reason to eagerly await the demise of the Legacy Media.

But then I remember when “Christmas Holiday Specials” weren’t broadcast until a couple of days before Christmas.  How naïve we must have been then!


(via Armchair Commentary, via Instapundit.  Title credit: “Brookdalepark”)
-----
[1]  Quoted in its entirety, as John says “Please pass on, share, and enjoy.”

Coming up next on VH1...
Woah, Canada Dept
Canadian Press:

HALIFAX, N.S. - It was supposed to be a quick bathroom break at the local Tim Hortons before the bride-to-be walked down the aisle.

But Nancy Rose knew her big day was about to turn ugly when she spotted an enraged woman in a tube top racing toward her, a can of spray-paint in her hand.

As members of the wedding party watched in disbelief, her sister-in-law began dousing the young bride with black paint, soiling her beaded gown and veil with sooty stains.
...
Rose’s limousine driver jumped in to help, pinning Michelle King against the car as the wedding party of cousins and a sister looked on.

When the driver tried to restrain her, King’s tube top fell down, exposing her breasts but giving her a chance to flee.

King, who is married to Rose’s brother, was given a conditional discharge Tuesday after pleading guilty to mischief charges stemming from the incident in July 2008.

Crown lawyer Jennifer MacLellan wouldn’t comment on the sentence, but said she hasn’t seen a case quite like this before.

Algorithm or “Al-Gore”-rithm?
Who could ask for anything more?  Dept
Harold Ambler:

Among the points of interest in the unfolding climate scandal is the fact that the term “climategate” rapidly eclipsed global warming in the number of links produced by a simple Google search.

So he wrote ’em a note, and got back:

Hi Harold,I can verify that Google has not ever removed the query [climategate] or variations of the query from Google Suggest.  It was never a “decision” as you suggest in your question, but instead it may have disappeared from the Suggest feature because of a normal update of the Suggest feature.  The suggestions change dynamically over time through automated processes based on relevance algorithms.

Google Suggest uses a variety of algorithms in order to come up with relevant suggestions while the user is typing.  We do remove certain clearly pornographic or hateful or malicious slur terms from Suggest, but we have not removed anything in this case.

Well, yeah, except that doesn’t exactly explain why "global warming" (11 million links) or "climate gate" (note the space, 10 million links) get auto-suggested, but "climategate" (now over 30 million) does not.  In the comments, Harold’s readers report similar behaviour with google.ca, google.co.uk, and google.com.au.  They also note Al Gore’s position as a member of Google’s board (pointing to the obvious pun).

Here’s Google’s auto-suggest for "climateg", as of a couple of hours ago (Sorry about the quality, I can’t screencap javascript popups and so had to photograph the monitor face): 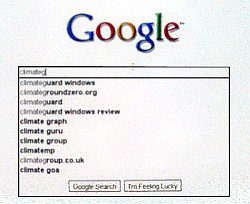 As America’s information sources morph increasingly toward the Soviet model of concealing as much as they report, people are noting this stuff.  Allowing it to occur (even if innocently) only encourages the paranoia.

LATER (091219 19:25), Related:
Either The Google Suggestion Algorithm Is Broken, Or I Need to Revise My Opinion of Humanity
Via:  Andrew Bolt.  Title idea from Neil Jones.