Credit where credit is due...
Name That Party Whoops!  Dept.

Gov. Brian Schweitzer has signed into law a bill that aims to exempt Montana-made guns from federal regulation, adding firepower to a battery of legislative efforts to assert states’ rights across the nation.

“It’s a gun bill, but it’s another way of demonstrating the sovereignty of the state of Montana,” Democrat Schweitzer said. - Helena Independent-Record

Via: A couple of people, most recently The Fat Guy

Annenberg School of (non) Communications comes out for freedom of the press
You know, you really can’t make this stuff up... 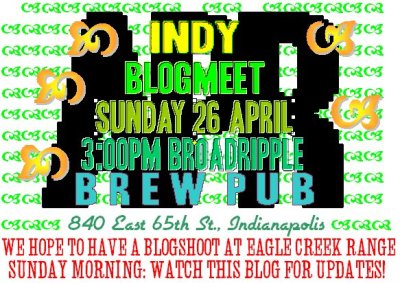 UNC chancellor comes out for freedom of speech
...unless it should create a “difficult situation.”

“We’re very sorry that former Congressman Tancredo wasn’t able to speak, [University of North Carolina, Chapel Hill] Chancellor Holden Thorp said in a prepared statement.  “We pride ourselves on being a place where all points of view can be expressed and heard, so I’m disappointed that didn't happen tonight. I think our Public Safety officers appropriately handled a difficult situation.”

Identify and expel the students involved.  Either than or admit your university is run by mob action.

My prediction?  No action whatever on #1, deafening silence on #2.


Via Bill Quick, whose take is a bit saltier than mine.

“On behalf of our University community, I called Mr. Tancredo today to apologize for how he was treated. In addition, our Department of Public Safety is investigating this incident.  They will pursue criminal charges if any are warranted. Our Division of Student Affairs is also investigating student involvement in the protest.  If that investigation determines sufficient evidence, participating students could face Honor Court proceedings.”

NCAA comes out for freedom of speech
Hahahahaha, just kidding!

“We don't see it as a free speech issue.  What we do see it as is a recruiting issue.” - Erik Christianson, NCAA spokesman

College sports were a cesspool of corruption long before[1] Howard Cosell ranted about “Big Time College Football” (and yes, you could hear the caps rattle past when he spoke!), and the National Collegiate Athletic Association has been the primary enabler/monopolist in the whole sorry mess.  Billions of untaxed dollars in revenue, multi-million dollar coaches’ contracts, unaccountable athletic “departments,” all balanced on the back of unpaid “student-athletes,” administered and defended by a bunch of faceless  bureaucrats in Indianapolis.

Elsewhere:
In the discussion at Volokh Conspiracy, commenter “Phil17” raises the key issue:

Can an institution [i.e., the NCAA - o.g.] impose rules that provide for sanctions in the event that a member institution fails to illegally abrogate the First Amendment Rights of a student?

Lovers of liberty would say “no,” but as has been demonstrated many times Mr. Christianson’s organization is no lover of liberty when it might interfere with the cash flow.
-----
[1] From Horse Feathers, 1932:

Following up
Was away from the internet Saturday night and all day Sunday, so a bit of catching up is in order.

Got ’em.  Good.  And I’ll add, good on ya, Mr. President, for finally making the right decision.
Now can we get some rules of engagement that don’t require 35 calls to Washington?

Oh well, it was fun while it lasted... Dept.:
Charles at LGF links (and quotes) a debunking of the Obama pizza story.[1]   (Guess we’ll have to go back to hassling the Congressional Democrats.)

Calling all cars! Be on the lookout for “Anonymous”!
After all, who knows what he might do?

A “loose coalition of Internet denizens,” Anonymous consists largely of users from multiple internet sites such as 4chan, 711chan, 420chan, Something Awful, Fark, Encyclopedia Dramatica, Slashdot, IRC channels, and YouTube. Other social networking sites are also utilized to mobilize physical protests. ... Anonymous is of interest not only because of the sentiments expressed by affiliates and their potential for physical protest, but because they have innovated the use of e-protests and mobilization. Given the lack of a unifying creed, this movement has the potential to inspire lone wolf behavior in the cyber realms.

The quote, extracted by Slashdot, is from a 215-page “Terrorism Threat Assessment” prepared for the state of Virginia by a State Police subdivision called the Virginia Fusion center.  (Ace of Spades, Little Green Footballs, Daily Pundit, Tim Blair, and Protein Wisdom will be disappointed.)

Now I admit that I’ve not bothered to download and read the whole thing, but if this is typical of its contents, I wonder how much Virginia paid for it.

Needless to say, the Slashdot commenters have offered a whole host of additional suspects:

in related news,
a coalition of persons of interest is growing at an exponential rate on the Internets. Members of the group, posting in various websites under the handle, Guest, often post provocative and sometimes unlawful comments. By using the handle name "Guest", they were afforded anonymity.

Not only that...but, I hear there are people who actually register accounts with FALSE or misleading information as to their true identity. Pseudonyms and the like.

What the hell is this country coming to?

Genius. How great would it be if Slashdot changed 'Anonymous Coward' to "Lone Wolf" for a few weeks?

All your base are belong to us.

Here’s what they aren’t reporting.

The Navy was right next to this lifeboat.  If it wasn’t prepared to blow that boat out of the water on an instant’s notice, it was criminally lacking in readiness.

But I believe it was.  I believe that the hostage captain was in the water and away from that boat for a few minutes at least.  But the warship did not blow the pirates out of the water and rescue the captain because they had to phone home to the political and legal lackeys of our Transnazi President, who is determined not to wield violence on behalf of America or her citizens under any circumstances, ever.

Perhaps an example of why instantaneous communication with the lords and masters back home isn’t always a good thing.

Of course, if we had a sensible policy about piracy...

Elsewhere:
Tam is having flashbacks.  (Why yes, that does sound familiar!)

1 Whatever happened to "it's better to ask forgiveness ... "? I wouldn't be surprised if that brave man ends up dead. You can't negotiate with children, especially if you're answering to a child on your own side.

Conservation? Not for the political class.
The Wall Street Journal:

New homes “with slanted roofs,” for instance, will be required to meet a “solar reflectance” standard if they use “fiberglass asphalt-shingle roofing.”  We’re not sure what that means either, but we do know that everything in homes will also face new efficiency regulations -- including furnaces, laundry machines, dishwashers, “showerheads, faucets, water closets, and urinals,” even (or especially?) jacuzzis.

One of the more revealing sections focuses on products “intended for a general service or general illumination application” -- i.e., lights.  This isn’t surprising coming from the politicians who decided in 2007 that the public must be protected from the incandescent lightbulb, but it is excruciatingly detailed.  By 2020, “the manufacture of any general service lamp that does not meet a minimum efficacy standard” will be prohibited.  That includes fixtures “designed only to be mounted directly to an art work and for the purpose of illuminating that art work.”  But not “decorative lighting strings,” so Christmas trees will escape the lamp police. For now...

When you're the president of the United States, only the best pizza will do - even if that means flying a chef 860 miles.

Chris Sommers, 33, jetted into Washington from St Louis, Missouri, on Thursday with a suitcase of dough, cheese and pans to to prepare food for the Obamas and their staff.

He had apparently been handpicked after the President had tasted his pizzas on the campaign trail last autumn.

That last via Ace, where “Jack M.” says

Hey, you guys know what says you are really sincere about this whole Global Warming thing that you want to use to justify an economy crushing cap and trade program?  Jetting a dude across the country to make you a freaking pie.

Silly rabbit, sacrifice is for peasants!

Next time, carry a folder labeled “End of World Tomorrow - DON’T TELL ANYONE”
The Times:

...Bob Quick, who resigned this morning as Assistant Commissioner of the Metropolitan Police, inadvertently revealed details of the operation to photographers in Downing Steet. The notes were typed on a clearly visible document that he was carrying under his arm as he went in to see Mr Brown and Jacqui Smith, the Home Secretary.

As soon as the photograph was published, Scotland Yard and MI5 moved to quash its publication by issuing a rare D-notice to media organisations. Recognising, however, that the operation had already been compromised, they decided to carry out the raids in broad daylight.

Seems like they shouldn’t have made all the fuss.  By doing so they destroyed a wonderful channel for disinformation.

Or just sending somebody a message.