Here comes the trade war
It’s the thirties! All over again!  Dept. 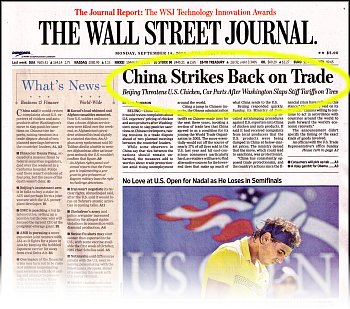 1 Ol' Barry's just trying to help his friends over at the AFL/CIO hqs. Just a negotiation ploy, doncha know? Start a war, then negotiate to get what you want.

Hey! That does not compute!

Sometimes, revisions are necessary
Chris Muir has to make a slight correction: 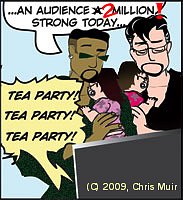 Joanna is supposed to be there.  I’ll expect a complete report!

This is the kind of analysis that it would be nice to get from journalists, but most of them went into the profession because (among other reasons) they were told there would be no math.

Latest federal WTF?
And here I’d thought that urban densification was the great new concept for saving energy, time, and the environment.  So how’s that supposed to square with the Federal Housing Administration’s upcoming lending rules for condominium properties?

All development not considered primarily residential are out. For instance, a development with more than 25% of the total floor area dedicated to commercial business use is out.

Meaning:  So much for most “new urbanist” mixed-use properties?

Noise issues is a new concern, so any development within 1,000 feet of a highway, freeway, or heavily travelled road, 3,000 feet of a railroad, 1 mile of an airport, or 5 miles of a military airfield will become ineligible for approval.

If the property has an “unobstructed view, or is located within 2000 feet of any facility handling or storing explosive or fire prone materials,” it is not insurable - we’re not talking just fireworks factories here.  A gas station 2 blocks away can disqualify this development.

So the gasoline station that’s on the other side of the soccer field will put me out?  Lovely!

As Chris Bradford notes, “these new regulations seem purposely designed to push new homeowners out of dense, urban areas to the suburbs.”  I guess at the FHA the word is now “new suburbanism.”

[The Empire State Building] sits on the space that used to be the Waldorf, at the time one of the most famous hotels in the entire world...  But [in just over 400 days] they knocked it down, cleared the space, ...and built the icon of America... with less technology, with men who threw hot steel and hot rivets at each other.

Do you know what they used to call the Empire State building?...  They used to call it the “Empty” State Building...  For years during the Great Depression it was a symbol of hope.  Many tried to tear it down and say, “[This] is the real message of America: It’s empty.”

Where is our American spirit?  Where is our ingenuity?  It’s still alive. Listen. You can hear it. It’s no longer calling for help.  It’s digging itself out from beneath the rubble and the wreckage.  It has laid dormant for a while.  It lay confused and dazed, but it’s about to come out of the smoke, dust itself off, and declare itself free again. - Glenn Beck*

Elsewhere (added 09/12):
Allahpundit Twitters 9/11
The Hoosierpundit:  September 11 Chronology
Juanito Cabrone:  You shouldn’t want to forget
More reminiscences:
Pamela Stennis:  Inside looking out - from the 59th floor
Turk:  Eight Years Ago
drjim:  “The intercom burst to life...”
You Are the First Responder
-----
* with a little rhetorical tightening by O.G.

I swear, kids these days...
Hey, Roberta!  Dept.
Don’t even know the difference between Mimeograph and Ditto.

Hey, if it’s a “religion,” does that mean we can ban it from government?
The Guardian:

Senior executive Tim Nicholson claimed he was unfairly dismissed by a property investment company because his views on the environment conflicted with other managers’ “contempt for the need to cut carbon emissions”.

In the first case of its kind, an employment tribunal decided that Nicholson, 41, had views amounting to a “philosophical belief in climate change”, allowing him the same legal protection against discrimination as religious beliefs.
...
The decision, which is being challenged by the company, comes two years after the law on religious discrimination was changed so that beliefs no longer had to be “similar” to religious faith to receive protection in the workplace.

Under the new law “philosophical belief” is protected by the law alongside religious belief if it passes a legal test requiring it to be cogent, serious and “worthy of respect in a democratic society”.

I was just asking...

Elsewhere:  DrewM. has some thoughts.

Lapdogs acted like lapdogs
And Camille Pagila is upset:

As an Obama supporter and contributor, I am outraged at the slowness with which the standing army of Democratic consultants and commentators publicly expressed discontent with the administration’s strategic missteps this year.  ...The media warhorses failed to speak out when they should have -- from week one after the inauguration, when Obama went flat as a rug in letting Congress pass that obscenely bloated stimulus package.  Had more Democrats protested, the administration would have felt less arrogantly emboldened to jam through a cap-and-trade bill whose costs have made it virtually impossible for an alarmed public to accept the gargantuan expenses of national healthcare reform...

What do you expect from people whose only goals are to accumulate and preserve power, and protecting the One?  What do you expect when the party apparat emphasizes public unity and penalizes deviation from The Agenda?  Better not criticize; might give those eeevil righties ammuntion.  Better not examine too closely; might find a fatal flaw.  Better to argue using disparagement and shouting; might lose on facts.  Better not stand up and yell “Wait a minute;” might be shunned at the next cocktail party or (even worse) left off the short list for that next government sinecure.

(And as to the “media warhorses” doing anything but blindly promoting the Current Wisdom, well, we’ll just have to wait until the next Republican administration.)

In this discussion (about conservatives battling in public), “Og” lamented

It’s a bad lesson to us [conservatives] that we can’t come together to get a job done and then do the in-fighting in private.

True, but remember that slipping from “settling our differences in private” to “papering over the flaws in public” to “ignoring the bad news” is an easy process.  The Democrats’ situation constitutes a prime example.

Leading candidate for “Conservative” Twit Of the Year
You can’t make this stuff up Dept
Question:

“It seems that, in order to fix the GOP, the answer (as you see it) is to marginalize Palin.

Marginalizing Palin is only part of it.  We need to marginalize this entire specter of Blue Collar Republicanism for numerous reasons.  First, these people are not true conservatives.  They might be culturally conservative, but they are the first to demand big government help when it comes to things like economic protectionism, social security, etc.  They are FDR Democrats who are upset with the social liberalism of the Democratic Party.  Second, the Blue Collar Republicans represent a demographically dying breed.  This nation is becoming less blue collar by the day.  As more Americans go to college and get white collar jobs, they have little to no attachment to this outdated worldview.  Third, Blue Collar Republicanism is a morally and economically bankrupt way of life.  Lets look at the economic and cultural health of the blue collar areas.  Most have been economically depressed or decades, they are becoming filled with drug addicts and practically every other social ill.  Anyone with ambition flees at the first chance.

I know firsthand the problems with Blue Collar Republicanism because I come from an area in rural PA where this mentality is strong.  The people there think its great, but it is far from socially or economically healthy.  The underemployment rate during good times hovers in the 20 percent range probably regardless of the posted unemployment rate.  The area is completely dependent on transfer payments from other areas of the state (Philly suburbs) to provide basic services like roads, schools, and state police.  The area is becoming nothing but old people and druggies.  Anyone with any sense of ambition or desire to better themselves, fled after graduating high school.  Socially, these people may attend church more than my neighbors in the suburbs, but they are far from moral.  Alcoholism, drug abuse, teenage pregnancy, and now even crime are out of control.

This contrasts with the Philly suburbs where I attend law school.  I do not see drug needles and crack pipes when I walk down the streets.  I do not see pregnant teenagers when I go to the grocery store.  I do not see the grocery store filled with people with food stamp cards on the first of the month. [In Philadelphia?!? - o.g.]  I don’t, but most of my neighbors leave their cars unlocked, where as my mother left hers unlocked for 20 minutes on accident once and someone decided to rummage through the center storage compartment for change.

The reason I draw this contrast is simple.  The Republicans have embraced the socially and economically ill former and threw the economically stable and socially healthy latter under the bus.  Greene County has went Republican only 4 times since 1900 where as Chester County has went Democrat only 3 times since 1900, but the Republicans are content with seeking out economically and socially distressed places like Greene County where as Chester County, the richest county in the state, is too elite now.

The Blue Collar Republicans should just shut up, take their seat at the back of the bus, and get their own affairs in order before screaming at the rest of us.

Alright, Iowahawk, ’fess up.  This is really you, right?

1 "Alright, Iowahawk, ’fess up. This is really you, right?" Heh, my first thought also. Then I thought, what if it's not? Naw, couldn't not be.

So which is it? 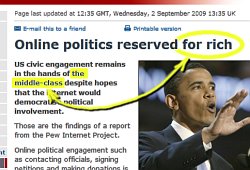 Via: Insty, whose reader Eric Thompson supplies the obvious answer.