Poof! No more music!
Dog days of Summer, must be time for another DRM system to go titsup:

Yahoo e-mailed its Yahoo! Music Store customers yesterday, telling them it will be closing for good—and the company will take its DRM license key servers offline on September 30, 2008...

If you think this sounds familiar, it's because this happened earlier this year with MSN Music, although Microsoft has since relented and will keep the DRM authorization servers up and running through 2011.

Once the Yahoo store goes down and the key servers go offline, existing tracks cannot be authorized to play on new computers...

Is there anyone left out there who doesn’t understand that buying DRM-restricted content means you’re betting your collection on the continued success of somebody’s business model?

No Expectations
Headline at Ace:
Senate Republicans Threaten to Block and Filibuster All Business Until Drilling Restrictions are Removed

* dip in oil prices will lead to some relief in gas prices by September
* Dems will attempt to take credit, saying they “scared” Big Oil and “the speculators” into lowering prices (O’Reilly regularly takes that tack)
* Dems will the declare that the crisis is over, and refuse to budge on drilling
* Invertebrate GOP will fold their tents
- “fulldroolcup,” commenting at Ace

1930 called...
We knew they want to bring back prohibition.
Well, why not breach-of-promise, too?

A Hall County [Georgia] man owes his ex-fiancee $150,000 for breaking off their engagement, a jury decided Wednesday...

[Defense attorney Hammond] Law said earlier this week that he could find only one prior instance of someone suing over a broken wedding engagement in a search of 25 years of Georgia case histories.
- Gainesville (Georgia) Times

Another reason I’m glad my life is *outside* of “corporate”
Jeff Jarvis has an ad running on his site. 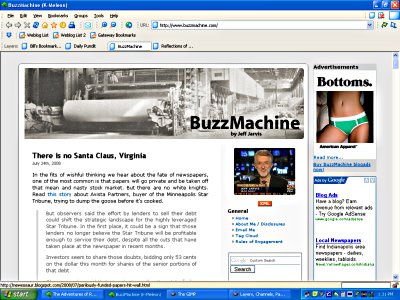 (That’s it, the one in the upper-right corner. Headed “Bottoms.”)

The ad, featuring a “crotch in colored underwear” has met with negative reaction from some readers (who found it distracting, irrelevant, or “sending the wrong message”). Marketeer Michael Madej thinks otherwise, but wonders

The only question mark in my mind about this ad is its appropriateness in the workplace. I noticed the ad yesterday on Jeff’s blog. I remember seeing it, being surprised that it was appearing on a business blog, and intentionally scrolling farther down the page so nobody saw it on my screen. So in that sense, it might be a little too edgy.

I guess it’s good that things change:  Just imagine if we had yesterday’s newspapers in today’s hyper-sensitive workplace. Why, you couldn’t allow a newspaper on the premises unless someone carefully obliterated all those double-truck lingerie ads the department stores used to run. (And no Sears catalog, either!)

It’s all the difference

In a dramatic move yesterday President Bush removed the executive-branch moratorium on offshore drilling.  Today, at a news conference, Bush repeated his new position, and slammed the Democratic Congress for not removing the congressional moratorium on the Outer Continental Shelf and elsewhere.  Crude-oil futures for August delivery plunged $9.26, or 6.3 percent, almost immediately as Bush was speaking, bringing the barrel price down to $136.

The rest of us remember the Carter administration, and what came after.

A person may cause evil to others, not only by his actions but by his inaction, and in either case he is justly accountable to them for the injury.     John Stuart Mill

(I began following the Lady’s story a bit over a year ago, when she got a forever home, but she was Rahel’s buddy long before that.)

The Summer of our Discontent
This comment, by “AnonymousDrivel” at Ace, does a good job of nailing down my dissatisfaction with our putative Presidential choices. It deserves quotation in its entirety:

As we evaluate our “top” Presidential candidates, consider their campaign performances and decision making. Now, what makes anyone think either will improve once in office?

This is not snark. These two possess inadequate judgment to make the difficult decisions correctly. Sure, McCain will righteously fall back on his Iraq stand (one that many had at the same time though certainly not any noteworthy Democrats, if any at all), but McCain was also making that stand to criticize Bush’s policies at the time and not purely as benevolent patriot. History shows he guessed right on one particular issue. In so many others however, he and Obama fail to address coherently, forcefully, issues that trouble this nation. Maybe one could blame their institutional training as Senators participating in the sausage-making that is national politics, but that might just be a copout, too. Just as likely it’s in their blood to be indecisive, muddling, and/or wrong. Neither has a core of principles other than the core that they believe in themselves to do the job. I'm sorry but that just isn’t enough.

Individuals with alleged connections to terrorist activity are filing libel suits and winning judgments in foreign courts against American researchers who publish on these matters. These suits intimidate and even silence writers and publishers.

They want to pass a law to protect American writers from foreign judgments that don’t square with the First Amendment.  Bravo.

Too bad the Senators weren’t equally interested in protecting Americans from the free speech restrictions of Campaign Finance “Reform.”

“Win” one (maybe), lose another
Could it be that the Federal Communications Commission will actually bring the hammer down on Comcast?

FCC chairman Kevin Martin told AP yesterday: “We found that Comcast’s actions in this instance violated our principles.” These require ISPs to provide open access to the network, “subject to reasonable network management”.

Martin has concluded that Comcast arbitrarily blocked filesharing apps, regardless of the amount of traffic they accounted for, and was not open with its customers about what it was doing.

Martin will circulate a recommendation on enforcement action, which the Commission will vote on next month. - The Register

Bowing to continued pressure from the New York Attorney General, two more big-name American ISPs have shutdown access to dozens of Usenet newsgroups that contain child pornography - and many more that don’t. [emphasis mine - o.g.] - The Register

Previously:
Democrat AG, ISPs team up to block 90% of usenet
Taking your liberties, one step at a time

1 Hope you have a good one, despite the rain that seems to have moved into the area.