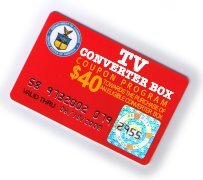 The government’s program to subsidize purchase of HDTV converter boxes for consumers with standard-definition analog televisions has been a less-than-stellar success so far, according to testimony given to the House Energy and Commerce Committee's “Subcommittee on Telecommunications and the Internet” on June 10th.

While the National Telecommunications and Information Administration reported[1] that more than 16 million coupons– each worth $40, expiring after 90 days– have been issued to over 8½ million households, so far the actual redemption rate is below 50%[7]:

There’s presently no provision for expired coupons to be renewed/replaced, and no one address can receive more than 2 coupons. So the question is:  Why did over half the people who went to the trouble to apply for coupons, and will (presumably) have no television reception after February 2009, wind up not using them.  While some non-redemptions may reflect upselling by retailers (who are beginning to offer less-expensive sets that receive HDTV, although they display it in less-than-full-definition[2], others may reflect my experience.

Despite NTIA’s claim of having certified 87 different boxes[1], in reality most remain vaporware.  In my market (metro area with a population of over 1,000,000) the choice has been between just three models, one of which (the Zenith/Insignia DTT900) would have been my pick except for its known problem with bad audio.  Also of interest, my neighborhood Target store (one of the chains cited in the NTIA testimony[3]) has never stocked any converters (although the unit that Target appears to sell in some markets, the GE 22729, most likely wouldn’t have interested me anyway because of its channel-retention problems and inferior video quality).  Anyway, I delayed my purchase, hoping that Zenith would get its technical problems straightened out (or another model would become available) before my coupons expired. Time passed, and yesterday, the last day my coupons were valid, I stopped at my local “headquarters of a major regional chain,” intending to buy a couple of the Zenith units (regardless of bad audio), only to be told that the model had been discontinued, and that they had 2000 units of the replacement model on order, but none in stock.  It was the end of a long day, so at that point I said to hell with it.

Now some readers may say I’m too picky (“Whaddaya want for less than a hundred bucks?”).  Well, my present television deserves good source signals, it’s a 17" Trinitron receiver-monitor with outboard stereo speakers[4]. And right now I’m holding off upgrading because I have more importand things[5] to spend my money on than $1000+ HDTVs (or even $400+ near-HDTVs).

I’ll most likely acquire a converter anyway, probably this fall when there are more models to choose from[6]. When I do, the lack of that $40 subsidy won’t kill me.  But it remains irritating that the government’s aribtrary deadline, coupled with roll-out problems from the vendors, will keep me from taking advantage of a chance to get some of my tax dollars back.

As one poster at AV Science says, “Another successful government program brought to you by your elected representatives.”

Or as my English (Liverpool) grandfather might have said, “They couldn’t organize a piss-up in a brewery.”

[3] another is Best Buy, who I refuse to deal with on general principles

[4] used mostly for watching DVDs.  About the only over-the-air television I view regularly is local news and severe weather coverage.  And no, I don’t have cable (see previous sentence).

[6] Although I’m not feeling any particuar time pressure.  If I’m still converter-less come next February, well, so what.  (Terrestrial broadcasters should pray my attitude isn’t widespread!)